It's not just Boeing that's hoping for an early return to service of the 737 MAX.

Now the dust has settled on Boeing's (BA 1.29%) earnings report, it's time to take a more analytical view of the presentations and what they could mean for both Boeing and its suppliers like General Electric (GE 0.72%) and United Technologies (RTX -2.55%). Boeing's long-term prospects look very favorable, but there are near-term risks here which every investor should appreciate. Let's take a closer look.

The latest on the 737 MAX, and what it means to suppliers

The 737 MAX issue is more of a mammoth than an elephant in the room these days, and CEO Dennis Muilenburg is quite clear that getting the aircraft back into service is Boeing's top priority right now. His expectation is that Boeing will deliver the certification package and the certification flight will take place by the end of September, with approval following a few weeks later, meaning that the 737 MAX will be back in service in October. 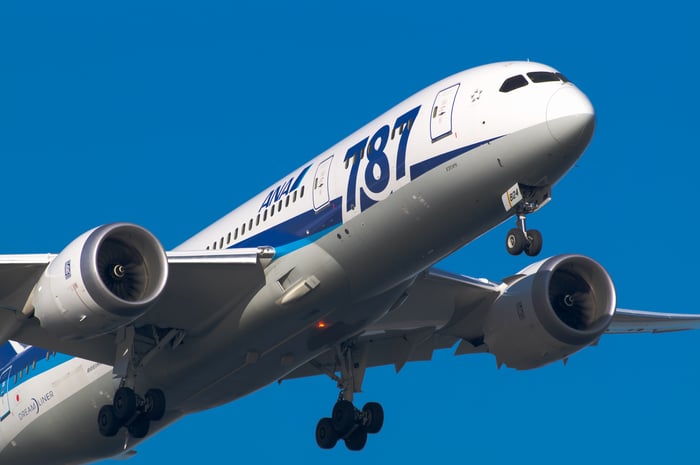 It's a timeline that General Electric -- joint venture partner in CFM International, the company that manufactures the LEAP engine for the Boeing 737 MAX and the Airbus A320 NEO -- will be following very closely. GE's CFO Jamie Miller recently outlined that the impact from the cut in 737 MAX production to 42 a month had impacted GE's cash flow to the tune of $600 million so far in 2019, and -- assuming the production rate stays at 42 -- it would have a negative impact of around $400 million a quarter.

That said, GE investors shouldn't panic: Miller said that when the engines are eventually delivered, the company will get all the cash for them. However, any further delay in 737 MAX is obviously going to significantly impact GE's cash flow in 2019.

Muilenburg also told Boeing investors: "Should our estimate of the anticipated return to service change, we might need to consider possible further rate reductions or other options, including a temporary shutdown of the MAX production."

This comment raises the prospect of two significantly contrasting scenarios taking place in the fourth quarter. The first is a production shutdown, and the second is Boeing preparing to ramp up 737 MAX from 42 a month to 57 a month in 2020.

History suggests ramping up production isn't easy. Given the significant discrepancy in the outcomes, Boeing's suppliers could find themselves in a difficult position from a planning perspective in the next quarter.

If GE investors have reason to be frustrated with Boeing over the 737 MAX debacle, then Boeing investors could say the same over the 777X engine, the GE9X.

Unfortunately, GE is having challenges on the GE9X, which means the first flight of the 777X "will occur in early 2020 rather than in 2019," according to Muilenburg. "While we continue to target 2020 for first delivery of the 777-9, the engine issue has added significant risk to the schedule."

This is obviously frustrating for 777X customers and could impact airlines' willingness to commit to orders. But it also threatens Boeing's plans to bridge the gap between legacy 777 production (currently 3.5 a month) and 777X production.

Muilenburg acknowledged the pressure, but said the impact could be offset "by producing more 777 current-generation freighters in 2020." The question then becomes whether Boeing will have to discount the 777 significantly, in order to help bridge the gap to 777X production due to GE's issues on the GE9X.

Boeing is looking at the feasibility of launching a new twin-aisle airplane, the so-called new midsize airplane, or NMA -- also referred to as the 797 by industry followers. Muilenburg was asked about the current position on it, and he replied that getting the 737 MAX back into service would come "ahead of our NMA work."

His position is understandable, but it will frustrate shareholders in potential supplier companies -- not least General Electric and United Technologies. The two companies are already toughing it out for orders on the Airbus A320 NEO, and are also highly likely to compete to be the sole engine supplier on the NMA. The president of Pratt & Whitney (part of United Technologies), Bob Leduc, previously outlined that his company's offer was conditional on being the only supplier, meaning that there will only be one engine option on the NMA.

All told, the earnings presentation raises the risk profile for Boeing and its suppliers. Any delay to the timescale of getting the 737 MAX back into service could have significant ramifications on suppliers and on GE's near-term cash flow. Moreover, GE and United Technologies won't be pleased with a delay in a decision over the NMA.

In addition, the technical issues on the GE9X could lead to margin pressure at Boeing Commercial Airplanes, and/or pressure on Boeing's plans to bridge the gap in production to the 777X. There's a lot hinging on bringing back the 737 MAX into service.