Amazon.com (AMZN -0.77%) is in advanced discussions to acquire as much as a 10% stake in India's Future Retail Ltd. (with an option to buy more), according to a report by Bloomberg. The move is a sign Amazon is seeking to expand its brick-and-mortar presence in one the world's fastest-growing retail markets.

Future Retail is a chain of more than 900 stores in India and controls a total of nine supermarket brands. The company is the country's No. 2 retailer by product turnover (sales) and is looking to be valued at about 20 billion rupees ($281 million). Future Retail's flagship brand, Big Bazaar, operates 239 outlets across India and the acquisition would give Amazon traction for its burgeoning fresh grocery delivery business in the country.

Discussions are yet to be finalized, and the deal could still falter or be delayed, according to the report. This potential purchase is another indication that the e-commerce leader is trying to gain a larger retail foothold in the world's second-most-populated country. 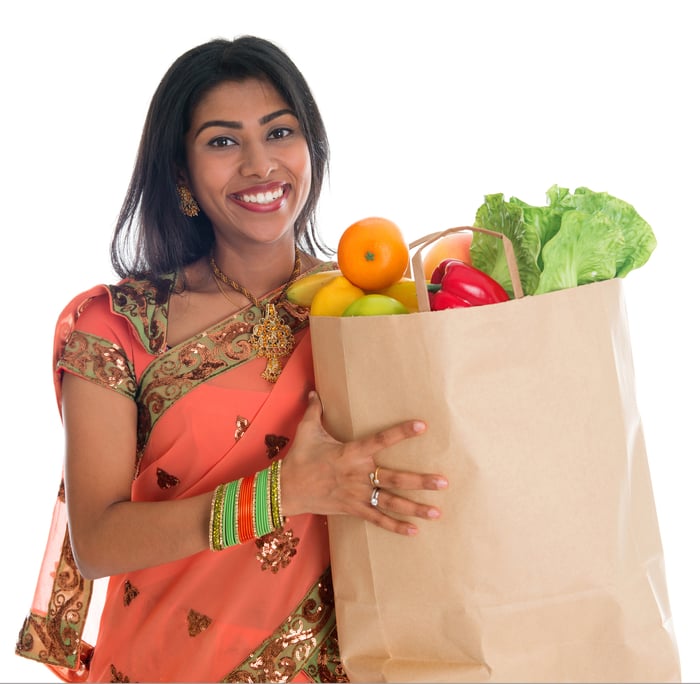 An alternative move into India

This isn't the first such move by Amazon to plant a flag among India's middle-class consumers. The e-commerce leader was in a heated battle with Walmart (WMT 0.43%) early last year to acquire a majority stake in India's biggest online retailer, Flipkart. Walmart outbid Amazon by paying $16 billion for a 77% stake in the digital seller.

At the time of the purchase, it was estimated that if Amazon gained control of Flipkart, it would have controlled about 80% of the e-commerce market in India, making the deal a must-do for Walmart.

A growing interest in physical retail

Amazon has been expanding its presence in physical retail locations. Its acquisition of Whole Foods Market in late 2017 for $13.7 billion was the company's largest deal to date, but Amazon has made a number of smaller moves that signal its growing interest in the space.

The company opened its first Amazon Go store in early 2018. The concept allows shoppers to take items from shelves and leave, foregoing the checkout process. Shoppers use the Amazon app to gain access, and the store is infused with computer vision, weight sensors, and artificial intelligence that detect and maintain a digital tally until the customer leaves the store. Once they depart, the shopper's account is charged for the purchases. The company currently operates a total of 15 Amazon Go stores in large cities like Chicago, New York, San Francisco, and Seattle.

Amazon turned heads in late 2015 when it opened the first Amazon Books location. The irony wasn't lost on investors, as the company severely disrupted retail bookstores with the debut of its online bookstore in 1994. In addition to books, the locations serve as a focal point for a host of Amazon electronics, while encouraging shoppers to become Prime members.

The company is also experimenting with Amazon 4-Star, brick-and-mortar stores that carry only the top sellers from its website -- each rated 4 stars or higher -- as well as new or trending items. The store offers a list of carefully curated items that are grouped together in categories such "Most-Wished-For," "Trending," and "Frequently Bought Together," as well as "Amazon Exclusives," no doubt a reflection of the wellspring of information Amazon maintains on its shoppers. The company currently has three of the specialty locations.

Early this year, Amazon ended its multiyear foray into pop-up kiosks. The company operated about 87 locations, which were located in shopping malls, Kohl's retail stores, and Whole Foods Markets. The pop-up stores gave customers hands-on experience with many of Amazon popular electronic products, including Echo smart speakers, Kindle readers, and Fire tablets, while also acquainting them with Prime Video and its Audible audiobook offerings.

Amazon has always taken the long view, and this latest move into brick-and-mortar in India shouldn't be a surprise to anyone that follows the company. Having successfully implemented the strategy in the U.S. with its acquisition of Whole Foods Market, it stands to reason that Amazon would use a similar approach to fulfill its aspirations in India.