Shares of Grocery Outlet Holding Corp. (NASDAQ:GO), an extreme value retailer of groceries and consumables with 330 stores across six states, are bucking today's overall market downturn and popped as high as 12.5% Wednesday morning after the company released its first quarterly result since going public.

Net sales increased 12.2% to $645.3 million during the second quarter, driven partially by 5.8% growth in comparable store sales, which topped analysts' revenue estimates of $627 million. Adjusted earnings checked in at $14.5 million, or $0.20 per share, which was better than the prior year's $0.19 per share result and much better than analysts' estimates of $0.13 per share. 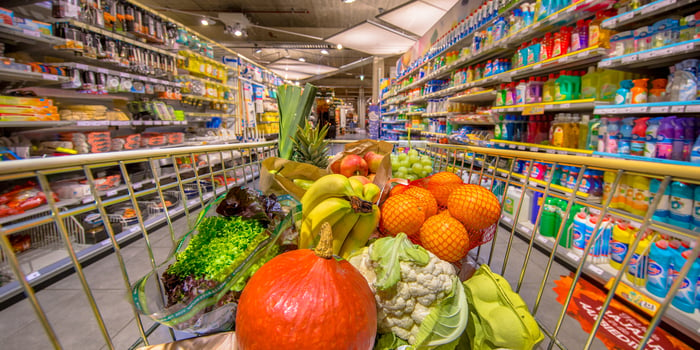 "We attribute the consistency of our performance to our unique business model that provides customers unbeatable value in a fun, treasure hunt experience along with great customer service through our local independent operators," said Eric Lindberg, CEO of Grocery Outlet, in a press release.

What investors should keep in mind with Grocery Outlet is its pricing strategy, as the company describes itself as an extreme value retailer of groceries. Analysts believe Grocery Outlet pricing is roughly 40% lower than that of conventional grocers, such as Walmart, and roughly 20% lower than that of traditional discount grocers, Aldi's as an example. Offering consumers that type of value could drive Grocery Outlet's growth story as it expands stores and takes market share, but there are also challenges to consider, such as slim margins and debt.