Yet since July 17, when CSX reported second-quarter 2019 earnings, its stock has slumped by 19%. Union Pacific, however, which reported a day later on the 18th, has seen its shares slip by just 2%. What's behind this 17 percentage-point differential in performance in less than one month?

There are two primary reasons behind the varying share-price trends. The first has to do with expectations. Leading up to the earnings report, both companies had already disclosed their volume results to investors via weekly rail traffic reports. As I discussed in earnings previews for both CSX and Union Pacific, investors were thus keenly focused on the outlook for volume in the second half of the year for each railroad.

Before earnings, Union Pacific telegraphed that the remaining quarters of 2019 would be difficult on the top line. CEO Lance Fritz very visibly met with President Trump in June to express his concern over further proposed import tariffs on U.S. trading partners. Such tariffs (which have partially gone into effect since June) will likely hamper major sectors of the economy -- sectors which form the backbone of rail shipment revenue, including agriculture, chemicals, automobile shipments, etc.

Conversely, CSX waited until its earnings report to inform shareholders that trends had deteriorated to the point where previous revenue guidance for 1%-2% year-over-year growth was no longer achievable. The railroad revised its top-line forecast to anticipate a decline of 1%-2%. CSX investors were surprised and dismayed -- shares fell 10.3% in the trading session following the earnings release and have slowly drifted further south in the last few weeks. 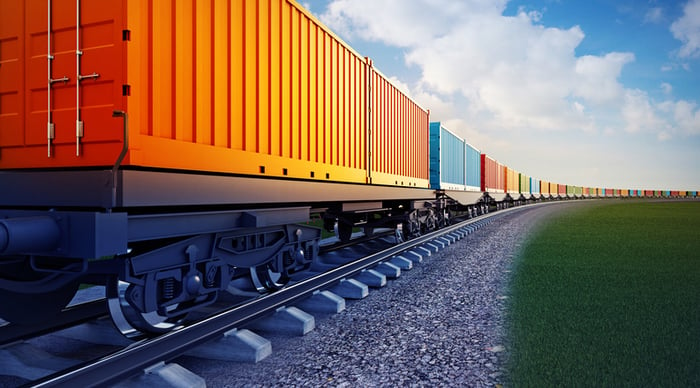 A penalty for stellar performance

The second reason for the split fortunes during the last month is related, ironically, to CSX's industry-leading performance in efficiency over the last several quarters. CSX has improved its operating ratio -- total expenses divided by total revenue, a standard measure of operating efficiency in the rail industry -- by roughly 10 percentage points since late 2017. It's done so through its strict implementation of precision-scheduled railroading, or PSR.

While the company's PSR efforts have propelled its eye-opening cumulative share-price appreciation of 128% over the last three years, the easiest productivity enhancements have been achieved, and progress will probably be incremental going forward. As a case in point, in the second quarter, CSX lowered its operating ratio by less than 1 percentage point (lower readings denote higher efficiency) against the second quarter of 2019, to 57.4%.

Union Pacific, by contrast, is still making headway in its journey toward operational efficiency. After a lack of progress in curbing its own operating ratio through various means, Union Pacific adopted principles of PSR late last year. In the second quarter of 2019, investors saw the first tangible results of Union Pacific's PSR implementation, as its operating ratio plunged by 340 basis points year over year, to 59.6% -- a record reading for the company.

Thus, investors appear to have recognized that if revenue will be crimped for both companies due to tough macro-economic conditions and resulting weaker rail volumes, Union Pacific may have more room to boost earnings per share through operational improvement.

Another way to look at this is that, due to CSX's already-optimized operations, some of its shareholders have cashed in their outsize profits from the last few years because they see limited upside until external economic headwinds subside. A portion of these investors may have already rotated proceeds into Union Pacific.

Of course, both companies have the ability to positively affect their respective destinies irrespective of current sentiment. While their paths have diverged in the short term, the CSX and UNP symbols have a tendency to normalize against each other over time -- a phenomenon that could begin to occur as soon as their next quarterly reports are issued in October.