Robert Jordan's "Wheel of Time" series is coming soon to an Amazon Prime Video account near you.

Every entertainment company is frantically looking for "the next Game of Thrones" now that the original fantasy-themed blockbuster show is off the air. Amazon.com (AMZN -0.64%) is attacking this space from a couple of angles, including a prequel series to The Lord of the Rings and a show based on Conan the Barbarian.

But those efforts are still evolving. Amazon's first attempt to publish a substitute for Game of Thrones will be Robert Jordan's Wheel of Time series, where the showrunners have found actors for six of the story's marquee heroes. This show will start shooting in a couple of months, under the producing auspices of Amazon Prime Video and Sony (SONY -1.21%) Pictures Television. 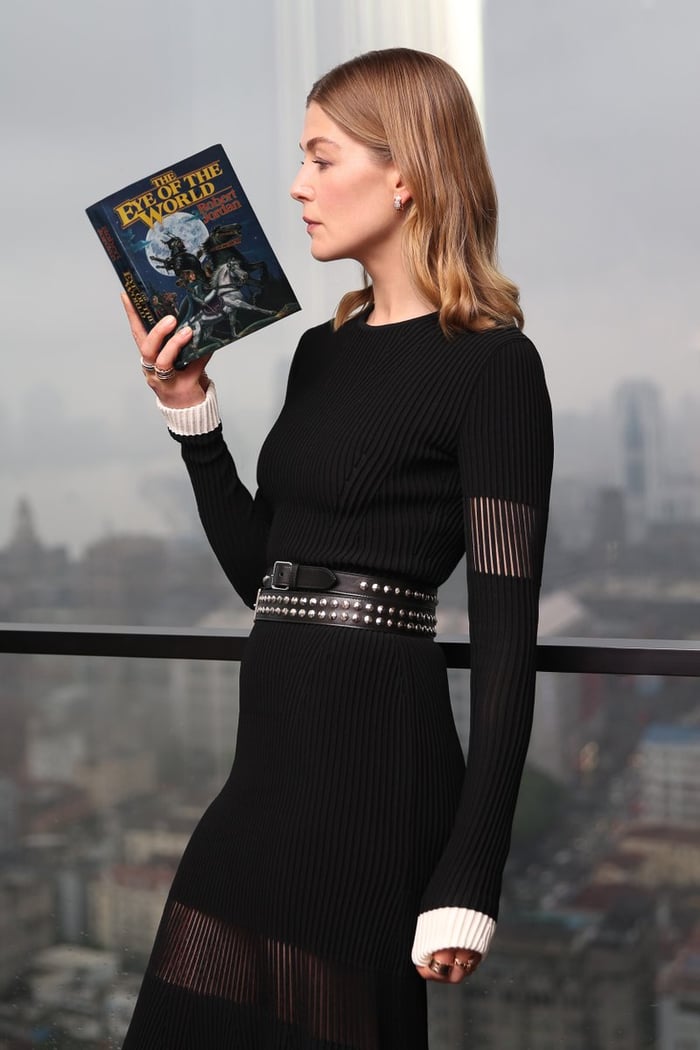 Rosamund Pike reading up on her character, Moiraine Damodred. Image source: Official Twitter account for The Wheel of Time on Prime.

The actors chosen so far have been on the younger, lower-profile side. Oscar-nominated 40-year-old Rosamund Pike is the exception to this rule, portraying the central character and legendary magic user Moiraine Damodred. Since she is the stated focus of at least the first season's plot, it makes perfect sense to reach for a more established name here.

Beyond Moiraine, the actors chosen to play Rand, Perrin, Mat, Egwene, and Nynaeve fall between the ages of 20 and 26. They all come with some experience, including titles like Power Rangers, The Shannara Chronicles, Dora and the Lost City of Gold, and Obey. It would be a stretch to call them household names, though.

This approach is similar to that of Game of Thrones, which struck a fresh-faced balance between relying on established stars and creating new Hollywood royalty. Amazon can still get closer to that winning concept by sneaking in a few more familiar faces in leading roles such as Moiraine's companion Lan, Thom the gleeful minstrel, and the affable ogier named Loial. The company could also take another deep dive into uncharted waters, reserving a larger portion of the show budget for elaborate settings and special effects rather than pricey actors.

Amazon will fill out the roster of heroes and villains then move on to start the actual production. This is a top-quality piece of intellectual property with a large base of ready-made fans, and a well-made show should find a loyal audience quickly.

On the other hand, it wouldn't surprise me to see Amazon pouring more resources into the upcoming Lord of the Rings prequel. It's hard to beat that property's built-in name recognition, even for a series with the heft and acclaim of Wheel of Time. The company is betting against itself in some ways, and I find it tough to imagine that Amazon would stick to its guns with several high-profile fantasy shows for the long haul.

That being said, I've been hoping for an Amazon-backed swing at the Wheel of Time series since 2015. This is a downright exciting project for me, both as an Amazon shareholder and as a longtime Wheel of Time fan.

Don't let me down, Amazon. This show can really, truly become "the next Game of Thrones" if you put your back into it.