Deep-discount supermarket chain Grocery Outlet (NASDAQ:GO) issued its first earnings report as a publicly traded company last week, and the results were exceptional. Sales jumped 12% to $645 million on a near 6% increase in comparable-store sales, leading to adjusted earnings growth of 12% to $14.5 million.

With this report coming on the heels of a successful IPO that was followed by significant market support, shares of the grocer have more than doubled in value from their $22 offering price. Grocery Outlet seems well on its way toward achieving its expansion goals. 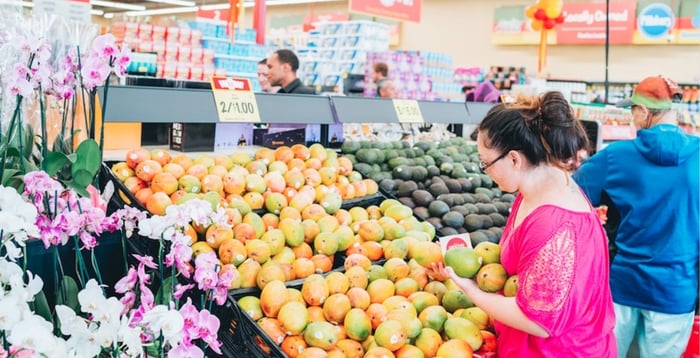 After opening eight new stores and closing one in the quarter, the supermarket chain now has 330 locations in six states. Its goal is to operate as many as 4,800 stores, an ambitious plan that will take years.

Along the way, though, Grocery Outlet has an opportunity to grab a good piece of the grocery market by offering an even deeper value proposition over the existing discount chains. Analysts estimate Grocery Outlet's pricing is at least 40% below that of industry giants like Walmart and some 20% below that of more-comparable rivals such as Aldi.

While steeper discounts may make Grocery Outlet attractive to consumers at first glance, what will keep them coming back is the inclusion of fresher food and consumables.

Cheap grub is a go

Dollar General (NYSE:DG), for example, reported higher first-quarter sales and earnings on the basis of adding more fresh produce at what it calls its "traditional plus" stores, which typically drive comp sales 10% to 15% higher. It also began self-distribution of fresh produce and frozen foods to hundreds of stores last year and hopes to have as many as 5,000 stores covered by the end of the year to take greater control over the quality of the food it sells.

Grocery Outlet is also expanding its assortment of goods in what it terms the natural, organic, specialty, and healthy category, or NOSH. It was one of the grocer's fastest growing segments in the second quarter.

The supermarket also began adding fresh seafood and grass-fed meat to its selection, seeing it "as an opportunity to fulfill the demand for items and value among existing customers as well as to attract new customers to Grocery Outlet."

At one time, consumers could get premium quality produce and meat only at specialty stores like Whole Foods Market, but the wellness boom shifted the landscape so that organic produce is now widely available from national chains like Walmart and Kroger, as well as your local grocery store. And now it's trickling down to the deep discounters and dollar stores, making their businesses even more attractive investments.

Grocery Outlet did report a loss of $10.6 million under generally accepted accounting principles (GAAP), or $0.15 per share, compared with a profit of $7.3 million, or $0.11 per share, year over year. But the difference was largely due to costs associated with its IPO. On an adjusted basis, it recorded earnings of $0.20 per share, handily beating Wall Street's consensus estimate of $0.12.

It also significantly reduced its debt load by using the proceeds from the IPO to pay down almost $400 million on two separate term loans. It now has $462 million in long-term debt.

Pointing out it has accrued 15 consecutive years of positive comps growth, CEO Eric Lindberg said, "The power of our business model is clearly demonstrated by our long track record of strong financial performance." Coupled with a treasure hunt atmosphere of discovery, plus what Grocery Outlet calls a WOW! experience offered by its franchisees, this deep discounter looks like it has more opportunity to exploit the consumer-driven trend toward bargain groceries.