Teleportation sounds cool. Cybersecurity in public spaces is even cooler.

Most of us are turning more and more to high-speed Wi-Fi for everything -- from e-commerce to online banking to even more data-hungry applications like streaming video and gaming. To enable these applications, home "mesh" routers and extenders are gaining popularity as they blanket your home or apartment in high-speed wireless signals -- or at least as much speed as possible from your service provider.

As such, a host of companies have been attacking the home mesh market. These include Google Wi-Fi, which is made by Alphabet; Orbi, made by Netgear; Eero, which was bought by Amazon.com earlier this year, and a host of others.

Among this stiff competition, a more off-the-radar company, Ubiquiti (UI -6.40%), formerly called Ubiquiti Networks (and listed on the Nasdaq Stock Market), also has a consumer router and mesh extender system called Amplifi. Ubiquiti traditionally made Wi-Fi equipment for wireless internet service providers and small- to medium-sized enterprises, so it knows its way around Wi-Fi technology.

CEO Robert Pera also once worked at Apple (AAPL 2.44%), and taking a design page from the iPhone giant, Ubiquiti made Amplifi easy for the layperson to set up, with a cooler-than-average-looking circular interface, and a host of features consumers might crave.

Recently, Ubiquiti took the mesh wars up a notch, giving consumers its "teleportation" feature at no extra charge. 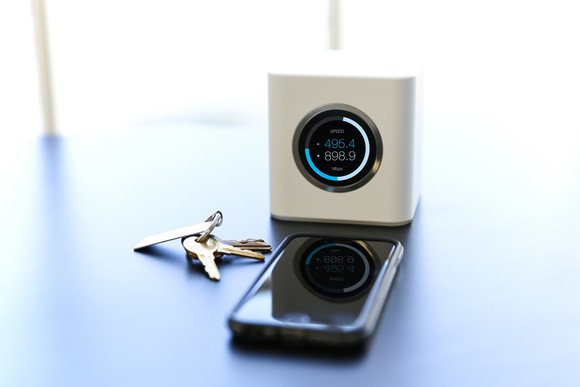 Teleportation from anywhere to your home

Amplifi Teleport first came out in 2018, allowing users to connect back to their home network via an encrypted VPN (virtual private network) connection, wherever they are in the world. This is important because when you use a public Wi-Fi network or hot spot (say, at a local coffee shop), your web data traffic could be visible to the Wi-Fi administrators and potentially vulnerable to sophisticated hackers. Considering that more and more people are doing privacy-sensitive tasks on the go -- like work presentations in airports or mobile banking -- the lack of privacy on public networks could be a problem.

By allowing encrypted access to your home Amplifi router, not only can you keep sensitive workflows private, but Teleport also enables you to access subscriptions and downloads -- such as your Netflix account -- from anywhere. In certain public hot spots, some content is geo-blocked, but Teleport enables browsing in public that might not otherwise be accessible.

Previously, you had to buy an additional piece of Teleport hardware for $99 and plug it into an outlet. That could be cumbersome to carry around, and free outlets might not always be available. But Ubiquiti just upgraded Teleport to a free software app available on iOS or Android, allowing you to hook up your smartphone, laptop, or smart TV to your home Amplifi router.

That's a pretty big move, as the other aforementioned home routers either don't have this function; require a third-party download software (which can be tricky to set up); or, in the case of Eero, require an extra subscription for $99 per year. So, by making a proprietary app and giving this functionality away at no extra charge, it looks like Ubiquiti is making a bigger competitive push for the smart-home market.

A name change suggests a changing strategy at Ubiquiti

The new feature for Amplifi comes at an interesting time for Ubiquiti. The company recently decided to move off the Nasdaq and onto the New York Stock Exchange, all while changing its name from Ubiquiti Networks to Ubiquiti Inc. That could signal that the company is eyeing other hardware and software markets that don't necessarily have to do with networking. Remember: Pera used to work at Apple, which was previously named Apple Computer before the company changed its name. Now, Apple gets a majority of its revenue from phones.

But investors haven't gotten a lot of details, as management stopped doing conference calls last year, and seems to be saying the bare minimum on its earnings releases. This is possible because Ubiquiti is so tightly held by Pera, its founder, who owns 80% of the company. Interestingly, the company continued repurchasing its stock at a rapid clip last quarter, buying back over 1.1 million shares and shrinking the dwindling amount of public shares even more.

The closely held nature of the company and aggressive buybacks suggest Pera may eventually take the company private. While that is possible, if it were the case, I'm not sure why the company would have gone through all the fuss of switching exchanges and changing its corporate name.

I would expect more product launches that may be somewhat outside of the company's previous core businesses. Ubiquiti has ventured outside of networking products before, but those products haven't really succeeded. A few years ago, it developed an in-house solar solution, which investors don't hear much about these days. And in 2017, the ill-fated FrontRow wearable camera was discontinued, leading to a big inventory writedown. More recently, the company came out with an LED lighting panel and smart dimmer switch, which do seem more practical.

If the Teleport app for Amplifi is any indication, it looks as if Ubiquiti might attempt more smart-home products. That segment is fairly competitive, however, with the biggest tech giants aiming for a spot in your home, so we will have to see what the "new" Ubiquiti comes up with.