We just found out which company wants to become "the Chinese SpaceX."

In a series of eight test flights extending from late 2012 through mid-2013, SpaceX launched a prototype "Grasshopper" reusable rocket to higher and higher heights, ultimately topping out at 325 meters in July 2013. Each time the Grasshopper went up, it came back down again to land where it began. In doing so, SpaceX proved its concept of reusable rockets, and paved the way for the success story that would become SpaceX's Falcon 9.

Six years later, no other American space launch company has managed to duplicate SpaceX's success. But China is going to try. 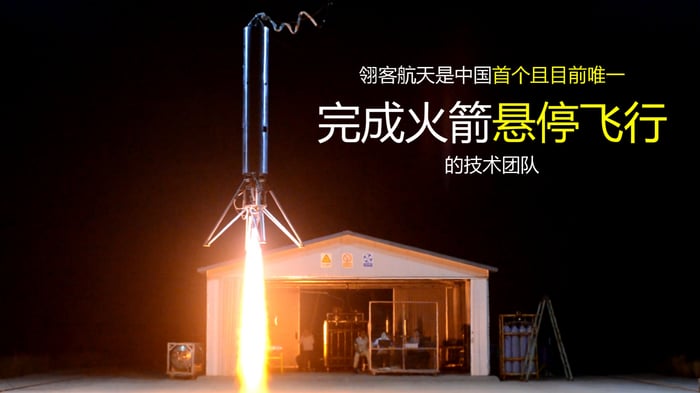 Earlier this month, over on the other side of the world, Chinese space start-up LinkSpace launched a 26.5-foot-tall RLV-T5 rocket and flew it to an altitude of 300 meters. After hovering there for a moment, RLV-T5 then gently descended back to Earth, landing less than three inches from where it began.

LinkSpace's launch this month essentially duplicated SpaceX's feat of six years ago, sending a rocket straight up 300-ish meters and bringing it straight back down safely. Although RLV-T5 never reached orbit, and was far too tiny to carry any appreciable payload even if it had, well -- Grasshopper didn't reach orbit either, nor did it carry a payload to space. Like Grasshopper, the RLV-T5 is more of a test bed than a finished product.

And so LinkSpace vice president Wan Mei was correct to hail the recent test launch as "a new milestone in China's reusable rocket research." To date, RLV-T5 is the largest reusable rocket any Chinese company has attempted to test. What's more, LinkSpace has already announced that it's working on a larger RLV-T6 that will be nearly twice the size of the rocket tested this month at 46 feet in height -- and nearly as big as the Electron rockets that Rocket Lab recently said it intends to make reusable.

If that one works, LinkSpace could be on its way to giving SpaceX a run for its reusable-money.

Six years behind -- and gaining

China desperately wants to catch up to SpaceX in rocketry, calling the development of the Falcon 9 "a big shock to us." To achieve its goal, China has mobilized not only its national space-industrial complex for this purpose, but given the green light to a nascent "private" launch industry comprising some five dozen companies to begin testing their own rockets as well.

And the plan appears to be working.

Call LinkSpace's latest test flight an "imitation" of SpaceX's achievement with Grasshopper six years ago if you like. It's still a breathtaking advance in technology. From Apollo 11 to "Jade Rabbit," it took China 44 years to put a lander on the moon, giving U.S. companies nearly a half-century's lead. Now China has closed that gap to just six years -- at least, in the field of reusable rocketry.

If we assume that China will continue following the roadmap laid out by SpaceX, LinkSpace's next test could be the one that marked "mission accomplished" for SpaceX itself -- and marked the end of the Grasshopper program and the shift to reusable Falcon 9 rockets. To do this, LinkSpace would try to launch RLV-T5 (or perhaps RLV-T6) and maneuver it off-axis, horizontally, before returning to base.

If LinkSpace can demonstrate this capability as well, it should be ready to try an actual orbital launch and landing next.

How long might that take? Well, it took SpaceX two years to move from the end of "Grasshopper" to the first successful Falcon 9 landing. Assuming a similar rate of development, China could have a full-scale orbital reusable rocket ready for commercial operation by as early as 2021.

At that point, SpaceX could face its first real competition in the market for payloads put in orbit utilizing cheap, reusable rockets. Speaking of which, experts believe that China's goal will be to cut the cost of Chinese space launch in half, to about $10,000 per kilogram.