Please ensure Javascript is enabled for purposes of website accessibility
Log In Help Join The Motley Fool
Free Article Join Over 1 Million Premium Members And Get More In-Depth Stock Guidance and Research
By Keith Speights – Aug 30, 2019 at 5:00AM

They're dirt cheap. But are they bargains that investors should consider buying?

Perhaps the best word to describe the overall status of cannabis stocks in recent months is "malaise." Many cannabis stocks have taken it on the chin. But there is a silver lining: They're less expensive than they've been in quite a while.

Earnings-based valuation metrics can't be used for most pot stocks for the simple reason that most cannabis companies aren't profitable yet. But we can look at price-to-sales (P/S) ratios to determine which cannabis stocks appear to have the most attractive valuations.

What are the cheapest pot stocks on the market right now? Here are the top five based on trailing P/S ratios. 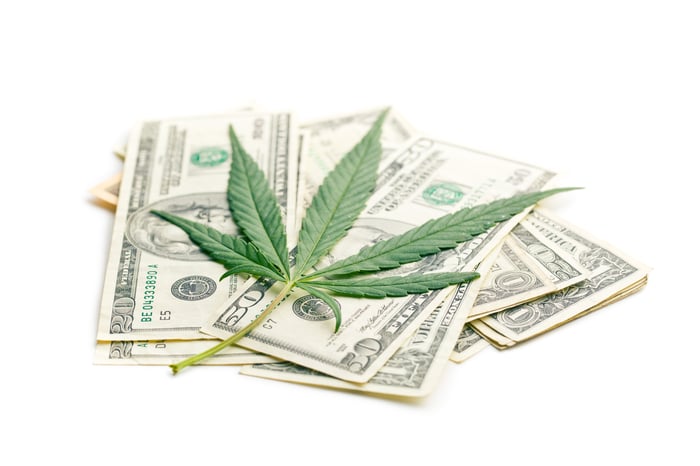 Scotts Miracle-Gro (SMG -2.75%) makes most of its money from selling consumer lawn and garden products. But the company's Hawthorne subsidiary is the leading supplier of hydroponics solutions for cannabis growers, qualifying Scotts as a cannabis stock. And it's the cheapest pot stock on the market based on P/S ratio, with shares trading at 1.9 times trailing-12-month sales.

While many cannabis stocks have floundered in 2019, Scotts is enjoying a banner year, with its shares soaring more than 70% year to date. The main reason is that the company continues to easily beat Wall Street revenue and earnings expectations as new product launches drive lawn and garden product sales and an expanding U.S. cannabis market boosts Hawthorne's revenue.

KushCo Holdings (KSHB) ranks as the second-cheapest pot stock on the market, with its shares trading at only 2.4 times trailing-12-month sales. KushCo's sales are skyrocketing, with the company posting 221% year-over-year revenue growth in its latest quarter, largely thanks to growing demand for its vaporizers and solvents used in cannabis extraction.

However, KushCo stock is anything but skyrocketing. Its shares are down more than 30% year to date. One key reason is that KushCo continues to lose money and those losses are likely to widen. The stock could enjoy a bump, though, from KushCo's plans to list its shares on the Nasdaq stock exchange, a move that will increase its exposure to U.S. investors.

Village Farms International (VFF 3.16%) shares trade at a low 3.3 times sales. Not only is Village Farms stock cheap, but it also ranked as the best-performing pot stock so far in 2019 as of July.

The company's cannabis joint venture with Emerald Health Therapeutics, Pure Sunfarms, is now fully operational and generating most of Village Farms' growth. Pure Sunfarms hopes to soon sell directly to Canadian retailers, which will boost its revenue even more. Village Farms also expects to begin selling hemp biomass in the U.S. this year and transition to selling hemp-derived cannabidiol (CBD) oil in the U.S. in 2020.

Scotts Miracle-Gro and KushCo are picks-and-shovels marijuana stocks, supplying ancillary products and services to the cannabis industry. Village Farms still makes most of its revenue from selling greenhouse tomatoes, bell peppers, and cucumbers. That makes CannTrust Holdings (CNTTQ -13.33%) the cheapest pure-play pot stock on our list with a P/S ratio of only 4.3.

CannTrust is dirt cheap, but it's also a hot mess right now. The company continues to reel from a scandal involving its cultivation of cannabis in unlicensed grow rooms. CannTrust's former CEO was fired as a result. The stock, which more than doubled by late April, is now down more than 60% so far this year.

Trulieve Cannabis (TCNNF -2.14%) is another pure-play pot stock with a really low valuation. The medical cannabis company's shares currently trade at 5.2 times sales. Trulieve stock was up more than 90% earlier this year but has given up nearly all of those gains.

Despite its disappointing stock performance in recent months, Trulieve's business is booming. The company reported record revenue and profits in its latest quarter. It's now operating 31 medical cannabis dispensaries in Florida, which should be on track to become the third-largest legal cannabis market in the U.S. over the next three years. Trulieve also completed an acquisition of a Connecticut-based medical cannabis dispensary.

Three of these cheap pot stocks look like pretty good picks to me: Scotts Miracle-Gro, KushCo, and Trulieve. I'm not yet sold on the long-term prospects for Village Farms. And my view is to wait for the dust to settle with CannTrust's scandal before making any move with that stock.

Among the three cheap pot stocks that I like, my favorite right now is Trulieve. I think the company is set to deliver strong growth as the Florida medical cannabis market expands. There's even a chance that Florida will legalize recreational marijuana within the next few years, giving Trulieve an even greater opportunity.

Keep in mind, though, that investing in marijuana stocks involves a significant level of risk. Even cheap stocks like Trulieve, Scotts, and KushCo can remain cheap for a lot longer than you'd like.