Earlier, the Senate told the Air Force to keep the ground attack planes operational through 2030. Now, Congress is allocating the funds to make it happen.

Three years ago, Congress delivered a a little windfall to Boeing (BA 3.52%) -- $100 million in new funding to upgrade the wings on some of the U.S. Air Force's oldest A-10 Thunderbolt II ground attack airplanes.

Recently, the A-10 news got 10 times better for the aerospace giant.

Following up on the Senate's instruction to "maintain air superiority" by "encouraging the ongoing modernization of the A-10 fleet through fiscal year 2030 to continue providing unmatched air power," the Pentagon last week awarded Boeing a $999 million contract to supply up to 112 new wing assemblies for the aircraft nicknamed the "Warthog." 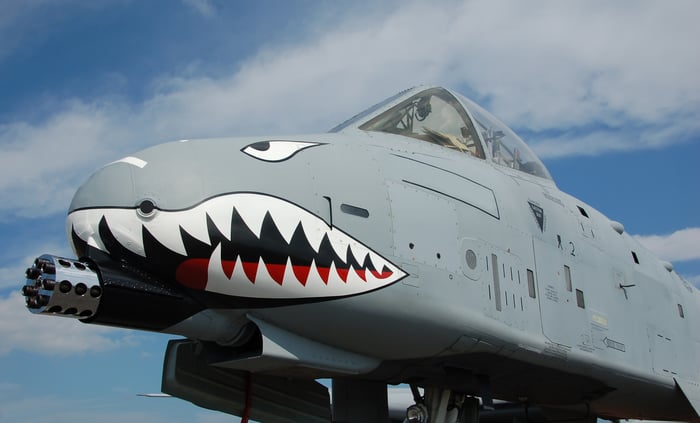 Fully delivering on that deal would provide enough assemblies to "re-wing" nearly half the 287 A-10s currently in the Air Force's inventory, according to Flightglobal's 2019 World Air Forces report, on top of the A-10s that were already upgraded in prior years.

That's certainly good news for fans of the A-10, who've fought for years to get the Air Force to commit to keeping its Warthogs operational.

It's also good news for investors in the companies that keep the A-10 flying -- Boeing, first of all. While it's one of the nation's biggest defense contractors, its defense business currently delivers an operating profit margin of only 6.9%, according to S&P Global Market Intelligence data -- barely half the profitability of the larger, commercial-aircraft side of the company.

These days, however, Boeing's commercial business is under pressure due to the fallout from its the 737 MAX MCAS design fiasco. Given that it will be on the hook to pay billions of dollars in compensation to its customers due to the grounding of those planes, Boeing could really use a cash infusion right about now -- so the A-10 rewinging contract couldn't have arrived at a better time.

This is also good news for Northrop Grumman (NOC 1.09%) and Lockheed Martin (LMT 0.57%), the two leaders of the Pentagon's "A-10 Prime Team" responsible for maintaining the A-10 fleet.

According to the language of the Pentagon's contract award, rewinging the A-10 fleet "is expected to be complete by Aug. 23, 2030." Those nine little words confirm both that the Air Force is now committed to keeping the Warthog flying through at least the next decade, and that it now has the money to pay for this. Moreover, because it would make little sense to put new wings on a plane, and then immediately retire it, chances are good that once upgraded, these A-10s will continue flying for years afterward -- and that Northrop and Lockheed will be continue being paid to keep them in service.

What this means for Lockheed Martin shareholders

One final bit of trivia for those who've been following the long, long saga of the A-10.

In years past, the Air Force has explained its attempts to retire the A-10 by saying it lacked the funds to both keep the older planes in operation and also buy all the new F-35 fighter jets from Lockheed Martin that it wants. As part of the congressional negotiations that led to the funding for the A-10, Lockheed Martin's lobbyists apparently also extracted a promise from legislators that they'd find as much as $1 billion in extra money to buy F-35s.

We haven't seen those funds appear yet in the Pentagon's regular digest of contract awards, but I imagine they will show up sooner or later. And when they do, we'll see that this big contract win for Boeing is actually also a win for Lockheed Martin, which will get paid not just for the F-35s it wanted to sell, but also for the A-10s it will continue to maintain.

Cake for Lockheed, and cake for the eating, too.