Picture, if you will, an oil supertanker.

A 100,000-ton beast of a vessel stretching the length of 2 1/2 football fields, powered by a 24-megawatt diesel-electric power plant, churning through the sea at 15 knots, and able to travel 9,500 nautical miles -- that's like the distance from New York to Antarctica -- before it needs to refuel.

Now, load this supertanker with a complement of Marines, armored vehicles, heavy-lift CH-53 helicopters, V-22 Osprey tilt-rotors, and hovercraft to carry the above to shore. What you have here is the U.S. Navy's concept of an expeditionary sea base (or ESB), a "mobile sea base ... that supports the deployment of forces and supplies to provide pre-positioned equipment and sustainment" where U.S. forces need to operate.

And now, the U.S. Navy is going to get two more of them. 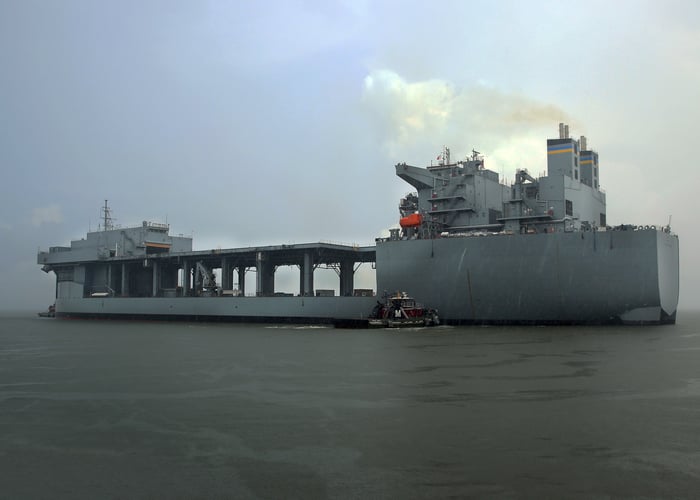 General Dynamics to the rescue

Originally anticipated to cost $1.5 billion each, the ESB concept was slimmed down a few years ago after General Dynamics (NYSE:GD) worked with the Navy to cut the price to a svelte $500-million-ish, using the contractor's existing Alaska-class oil supertanker as a base to work off of.

In keeping with that new and improved price tag, when the Navy announced last week that it has awarded General Dynamics contracts to build two more ESBs, it put the combined cost at $1.01 billion -- almost $500 million each. (Options that may be exercised on the contract could grow its value to as much as $1.6 billion.)

The two vessels, dubbed ESB 6 and ESB 7 (names will be assigned later), will be built at the General Dynamics NASSCO shipyard in San Diego, with construction expected to be complete by January 2025. Spread over five years, therefore, the per-year value of the contract is more like $200 million (more, with options).

General Dynamics is a gigantic defense company, No. 4 in size behind Boeing, Lockheed Martin, and Northrop Grumman. Its marine systems division alone (responsible for boatbuilding) takes in $8.4 billion a year in revenue, according to data from S&P Global Market Intelligence. As such, the ESB contracts announced last week, when spread over five years, will only amount to about 2.4% of annual revenue for the division (and less than 1% of revenue for the company as a whole). That's not really enough to move the needle on the stock, although the revenue will certainly be welcome in keeping up business for marine systems, which earns the company a 9% operating profit margin on its sales.

I wouldn't be too surprised, though, to see the contract turn out to be above-average in terms of profitability. As the Pentagon noted in making its announcement, the ESB contract "was not competitively procured" because "only one responsible source and no other supplies or services will satisfy agency requirements."

With no one else bidding for the work, chances are that General Dynamics was able to build a good chunk of profit margin into its contract. The fact that the tanker-based ESBs dovetail with NASSCO's growing business of building oil tankers for both commercial and military customers -- and allow the company to work off of common designs -- is only going to add to the production efficiencies for the company.