If there was any doubt that Harley-Davidson (NYSE:HOG) was going all-in on an electrified future, the U.S. motorcycle leader just dispelled it by unveiling three prototype pedal-assist electric bicycles designed primarily for urban riders.

As it prepares to officially launch its high-performance LiveWire electric motorcycle next month, Harley is making clear this is no longer your father's motorcycle company. It has a new vision about how people will get around tomorrow, and it intends to adapt to fit within it.

Yet, as is seemingly always the case with Harley-Davidson, the question of how well its new offerings might be received in the marketplace depends heavily on how much they'll cost. 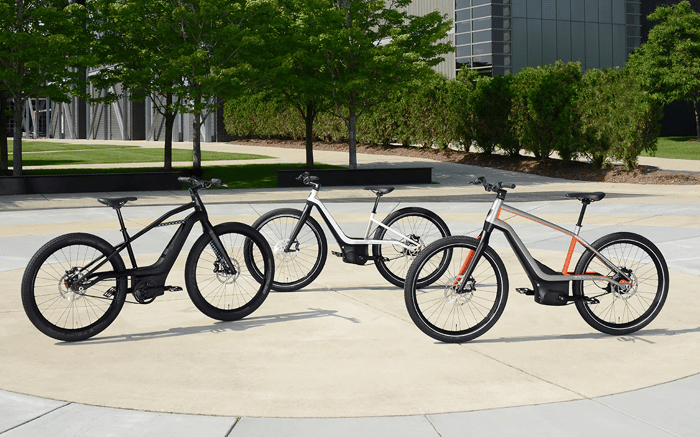 A new kind of two-wheeler

Harley knows better than anyone that it needs to change, yet the radical makeover under way isn't sitting well with many in its core demographic, who prefer its historic focus on bulky, chrome-laden iron horses with loud pipes.

The LiveWire came as a bit of a culture shock to those fans -- even apart from its electric powertrain, its sleek styling is decidedly different from the old Harley norm. But these new electric bicycles are even more of a departure -- there's nothing about them aesthetically that says "Harley-Davidson," though that could actually be a benefit.

According to Electrek, which was one of the first sites to report on the unveiling of the prototype bicycles at the motorcycle company's annual dealer meeting, the bikes took a lot of their design cues from e-bikes already on the market. They feature large tires, flat handlebars, mid-drive motors, and a belt drive. However, they also have some interesting differences, including a single brake lever on the handlebars, which suggests the bikes may also have linked hydraulic brakes.

Of course, the images of the prototype bikes that now appear on Harley's website come with a disclaimer: "Production model features will vary. Not yet available for sale. All future models shown may not be available in all markets." So Harley's engineers could, and likely will, come up with some different features for the bikes before they begin arriving in dealers' showrooms.

Need more than the Harley name

The biggest problem for the company may be the Harley name itself. There are already plenty of e-bikes on the market manufactured by companies that have more street credibility in the space than a motorcycle specialist that has built its brand around gears, grease, oil, and leather.

The average person in the market for an electric bike won't necessarily be someone with an affinity for the Harley nameplate, nor will they likely be willing to pay the usual premium that comes with its enduring mystique. Its internal-combustion mythos simply doesn't translate well into the e-bike market.

That's why pricing is such a concern, and why -- as with the LiveWire -- success in this niche will come down to the bicycles' specs. And even then, some consumers may still be reluctant to buy a Harley e-bike.

A full lineup of e-bikes

These aren't the first electric bicycles the company has unveiled. Earlier this year, Harley debuted two pedal-less, dirt bike-style mountain bikes at the Consumer Electronics Show, though those had no pedals and featured inverted fork suspension that showed they were intended to be ridden off-road rather than on pavement like the current prototypes.

Its acquisition of StaCyc earlier this year has also led to a pair of electric balance bikes for 3- to 6-year-olds, the IRONe12 and the IRONe16. With lithium-ion batteries and a 30- to 60-minute run time, they're designed to teach young riders how to handle a powered bike -- and introduce them to the Harley name.

Soon there will be an electric Harley-Davidson for every age group. Maybe we'll see Harley-branded electric scooters and skateboards, too. But as the company ventures further into the space in its bid to change the public's perception of what it is, shareholders may not appreciate the size of the gamble it's taking, given the lack of proof that consumers are also buying in.