Shares of Dell Technologies (NYSE:DELL) fell 10.8% in August, according to data from S&P Global Market Intelligence. The hardware and software tech conglomerate isn't immune from global IT spending, and sentiment around tech hardware took a big hit after a reescalation of the U.S.-China trade war early in the month. Dell's stock was also up quite handsomely in July, and it appears at least some investors thought renewed trade tensions were reason enough to take profits.

In fact, Dell's stock was down a lot more than 10.8% late in the month, until a better-than-expected earnings report on Aug. 29 sent shares surging over 10% the very next day, making up some of the lost ground. 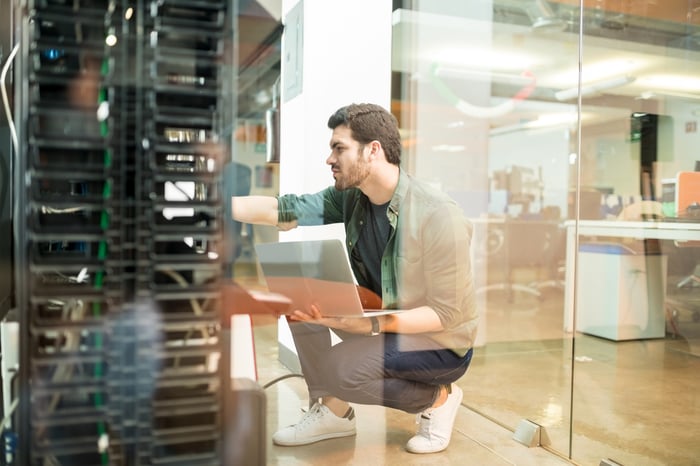 In the quarter, Dell slightly beat on revenues, which grew 1.4%. However, where Dell really shone was the bottom line, with non-GAAP earnings per share of $2.15 trouncing expectations by a whopping $0.65. The company benefited from a favorable customer mix, while keeping prices relatively high, even as component costs in memory and storage fell dramatically.

Management believes that the company is "in the early stages of a technology-led investment cycle," and that spending in IT remained "healthy," though the reported quarter ended prior to the new round of tariffs. Investors still appear unsure of how robust IT spending will really be this year and next.

Going forward, Dell continues to innovate and seek out customers where it can leverage its diverse portfolio, from servers and PCs to software and platform solutions. One interesting news item from August was a new partnership with AT&T, aimed at developing open solutions for 5G infrastructure.

New tech growth drivers such as 5G are running headlong into the crosscurrent of the trade war. As you can see, this has led to considerable volatility in Dell's stock, and August was no exception. However, with solid execution and a forward P/E ratio in the single digits, Dell may look quite attractive to bargain-hunting value investors after its "down" month.