Although Harley-Davidson (NYSE:HOG) will build a small 336 cubic centimeter motorcycle for China and the rest of the Asian market, don't expect to see a Harley that small in the U.S., at least not anytime soon.

U.S. consumers have seen all manner of lightweight and small electric two-wheelers from Harley, including dirt bikes in the style of mountain bikes; balance bikes for kids; and even bicycles, both pedal-less and pedal assisted. But a gas-powered sub-500 cc motorcycle? Don't count on it.

While there may be "more roads to Harley-Davidson," as the company calls its latest strategy, the iconic brand won't be blazing any trails for such tiny bikes here at home. And there just might be a valid reason for that. 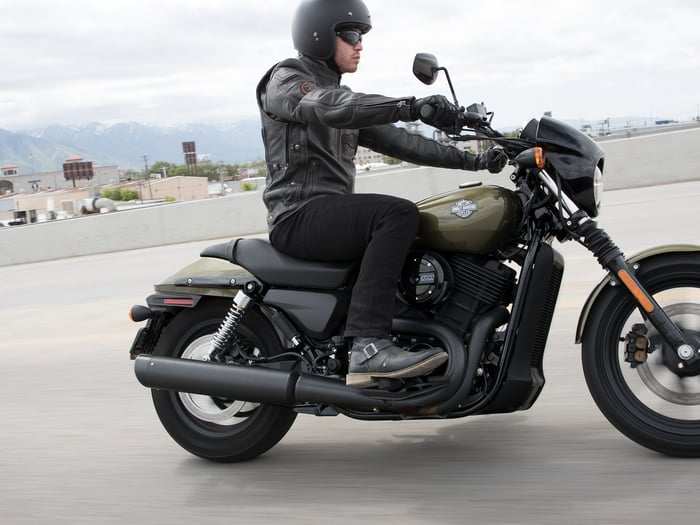 There is a revolution underway at the company, one that has been a long time coming and seems vital if it wants to survive. Because its core rider is aging out of the market, it has to adjust its business to meet the industry's new dynamics.

That's why the high-performance LiveWire electric motorcycle is about to hit showroom floors: to attract a new generation of riders. We can argue about how Harley prices its motorcycles in a declining market, but while purists are feeling angst about the changes at the company, its performance shows something needed to be done.

While not exactly in free fall, Harley-Davidson motorcycle sales are tumbling. It sold fewer than 133,000 bikes in the U.S. last year, 11% fewer than the post-recession high of 171,000 back in 2014. And it has 10 consecutive quarters of declining sales, while 16 of its last 17 quarters have been negative.

Yet it's Harley's smallest, cheapest Sportster and Street bikes that are selling the worst, even in the current market. The following chart indicates year-over-year changes in unit sales by category, letting you compare how Harley's small motorcycles fare against its larger touring and cruiser categories.

Year-over-year changes in unit sales in these categories. * Only Sportster sales; Street bikes were introduced in 2014. Data source: Harley-Davidson.

As you can see,Harley's sales for its various styles have been all over the place, and no category has been immune. But its biggest, most expensive bikes have fared best over time.

Some of the up-and-down cycle has to do with timing for model shipments. For example, Touring bike shipments were down almost 19% year over year in this year's first quarter because it had shipped a lot more Touring bikes in the first quarter of last year. That was due to adjustments Harley made to account for the new Milwaukee Eight engine it introduced in 2017, allowing dealers to sell through their older bikes first before it shipped the new ones. Other factors, such as a massive recall of its Street motorcycles at the end of the fourth quarter last year, caused it to take Street production off line; it didn't return until March of this year.

Moreover, small-engine motorcycles and scooters are commonplace in international markets. So if Harley-Davidson hopes to make good on its goal to have international sales account for 50% of its total, it must introduce smaller bikes in other markets. China, as one of the biggest markets for such vehicles, is a smart place to start.

While U.S. tastes may change over time, smaller motorcycles of the 336 cc sort that Harley is building overseas are likely to find a limited market here. The company even said in its blueprint for the future that the motorcycles it plans to build in the 250 to 500 cc range are intended for Asia; here at home, we'll see more bikes in the 500 cc to 1,250 cc range, like its Adventure Touring and Streetfighter bikes, which at their upper end certainly aren't small.

Because Harley's Touring bikes are its premier models (they're the biggest motorcycles, with the largest engines and highest prices), they still provide the profits and margins to finance its exploration of smaller and alternative models, despite uneven sales patterns.

So even though a small-displacement Harley may one day make its debut, you'll see many more electric models in dealer showrooms before these sub-500 cc bikes. And that's not necessarily bad for the company.