2019 has been a confusing year for investors in the U.S. agricultural industry (but aren't they all?).

Through April 2019, the United States experienced its wettest 12 months in U.S. history, according to data from the National Oceanic and Atmospheric Administration -- lousy news for farmers. It was also lousy news for companies like Caterpillar (NYSE:CAT) and Deere (NYSE:DE), two of the best-known names selling heavy equipment to farmers.

But last month, the news took a turn for the positive -- or at least for the less negative. An end-of-summer heat wave helped salvage soggy U.S. cornfields. And U.S. Department of Agriculture forecasts in August showed corn production falling only about 4% in comparison to 2018 levels. Soybean production is still expected to be down big-time -- as much as 19% year over year -- but the news coming out of the cornfields must have come as a relief.

Over the last month, shares of Caterpillar are up 14%, and Deere stock is up a nearly as-impressive 12% -- and now outperforming the S&P 500 by a good eight percentage points over the past year as well!

So why are the bankers at Wells Fargo downgrading shares of both Caterpillar and Deere today? 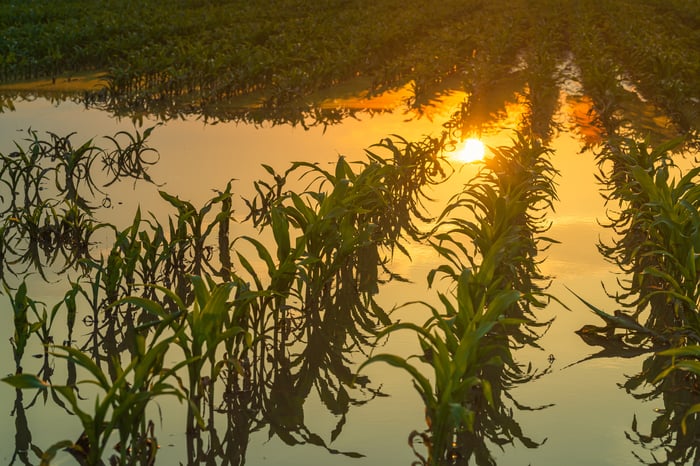 Fears of flooded fields swamped these stocks earlier in the year, but now they're bouncing back. Should they? Image source: Getty Images.

The answer, in a word, is construction.

Wells Fargo cites "relatively lackluster Q3 [20]19 construction dealer channel check feedback" as its primary reason for downgrading both Caterpillar stock and Deere stock today. As the analyst explains: "US construction equipment demand is at or near peak and likely will decline during 2020 due to flattening activity and a shift to equipment rental from purchase." So even if the companies' respective agricultural equipment businesses hold up reasonably well, this will put "downward pressure on earnings power."

It's worth pointing out that Wells Fargo's forecast contrasts with forecasts by others. As recently as July, for example, the American Institute of Architects forecast that non-residential construction activity in the U.S. in 2020 would be slower than in 2019, but would still grow 2%.

That being said, Wells Fargo has other reasons to doubt the attractiveness of both Caterpillar and Deere stocks, in addition to a general feeling of foreboding regarding the construction industry. On Cat stock, for example, the analyst told StreetInsider.com today that the company's energy and transportation division sales will decline "modestly" in 2020, offsetting growth in the "mid-single" digits in resource industries sales.

Most importantly, though, Wells Fargo worries that a weak sales environment for construction equipment will complicate Cat's efforts to reduce "global distributor inventory by $900 million" as early as this year. Weak demand will further sap backlog levels. As Cat struggles to unload unwanted equipment, this is likely to put downward pressure on prices -- and hurt profit.

Like investors generally, Wells Fargo seems to prefer Deere stock over Caterpillar. (Indeed, over the past 12 months, Deere stock has outperformed the S&P 500, while Cat stock has underperformed.)

Curiously, considering the rough year the ag industry has experienced, the reason Wells Fargo prefers Deere over Cat appears to be Deere's greater emphasis on selling agricultural equipment (which makes up 62% of Deere's annual sales, according to data from S&P Global Market Intelligence). "We still like N. American large farm equipment cyclical positioning [and] precision farm potential," writes the analyst.

That being said, even if this year's harvest might not be quite as miserable as it first appeared, Wells Fargo warns that "visible catalysts in place to push up N. American large farm equipment demand in [fiscal year] 2020" are lacking. That would seem to put into question Deere's ability to grow earnings at the 10% annual rate that most analysts expect to see over the next few years.

Viewing the two side by side: I see Caterpillar stock trading for just 11.7 times trailing earnings today with a 13% projected growth rate over the next five years. That looks more attractive than Deere trading at 15.3 times earnings with a 10% growth rate over five years -- a rate that could be imperiled if the ag industry takes another turn for the worse. Although the higher expected growth rate gives Caterpillar a higher bar to clear, there's probably a reason analysts think Caterpillar will grow faster -- it still has a lower PEG ratio than Deere's.

I also prefer Caterpillar's richer dividend yield (3.2% versus Deere's 1.8%) and its superior free cash flow ($4.6 billion generated over the last 12 months, versus negative free cash flow at Deere). Should the construction slowdown turn out to be less bad than Wells Fargo fears, or the agricultural slump worsen, I'd expect Caterpillar's stock to outperform Deere's.