August 2019 was not a great month to own Etsy (NASDAQ:ETSY).

In one single day, Etsy shares lost more than 12% of their value after the company reported a sharp decrease in "service" revenue in its Q2 2019 earnings report. By early September, the selling had subtracted nearly 30% from Etsy's share price, and the stock remains 16% below its pre-earnings price today.

According to one analyst, this makes now a great time to buy Etsy stock. 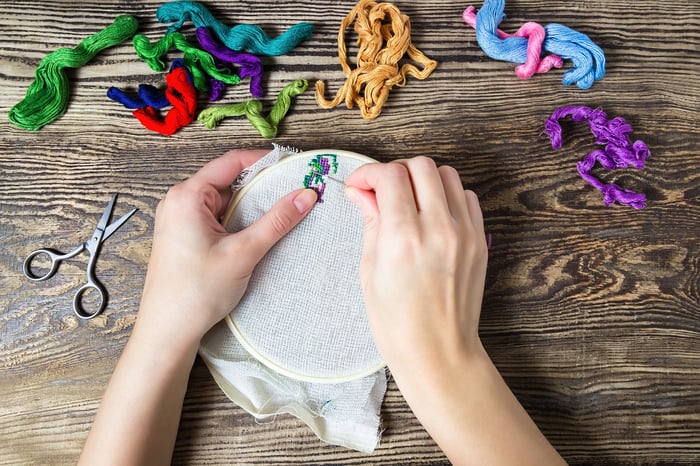 Thanks to August's sell-off, Etsy's gains of earlier this year have been almost entirely erased, and the stock now trades up by just single digits from its share price a year ago -- only a slightly better performance than the S&P 500. While not exactly cheap at 66 times trailing earnings, this appears to give investors a second bite at the Etsy apple -- and according to investment banker Wedbush, the opportunity couldn't come at a better time.

This morning, Wedbush announced it is upgrading Etsy stock to outperform, with a $66 price target. Not only is the stock cheaper than it was before Q2's earnings disappointment, but Etsy has also announced "a critical mass of new initiatives, highlighted by Etsy Ads and free shipping"; Wedbush believes these will help to expand profit margins, driving stronger earnings "over time."

Etsy derives revenue from two main businesses -- facilitating sales between sellers and buyers on its platform ("marketplace revenue") and providing services to the sellers ("service revenue"). It's the second of these revenue streams that appears to have investors worried.

But the announcement of Etsy Ads promises to perk up those lagging service revenues, and to help salvage Etsy's reputation as a growth stock.

As my fellow Fool contributor Robert Izquierdo explained last week, in a marketplace where "millions of sellers [are] competing for consumer eyeballs," Etsy Ads offers Etsy sellers the ability to pay for "streamlined advertising capabilities" to help them stand out in the crowd. The new Etsy Ads product has the potential to "improve upon the company's current, clunky advertising options," attracting ad dollars to the company -- and probably boosting service revenue in the process.

At the same time, Etsy is encouraging more of its sellers to offer (and pay for) free shipping on the wares they sell -- on orders of $35 or more. This has two advantages for Etsy.

On the one hand, free shipping removes a barrier to making sales, by lowering the apparent cost of shopping on Etsy from the customer's perspective. At the same time, requiring customers to place orders for at least $35 to obtain free shipping promises to increase the average size of orders placed on Etsy as customers reach a little higher to get the deal -- boosting both gross merchandise sales and revenue for Etsy.

Granted, this is hardly a new idea, offering free shipping in exchange for placing an order of sufficient size. But it's a tried and true strategy, and one likely to pay off for Etsy.

Wedbush approves of both these initiatives. It especially likes that Etsy has chosen both to improve its advertising capabilities and to offer free shipping benefits "launching into the holiday season," with support from a "brand marketing push" on television and social media.

Getting all of this rolling right at the moment many consumers begin thinking of their Christmas shopping lists, again, isn't an entirely original idea. But it is undeniably good timing nonetheless.

Etsy is rolling out all of the above at a time when its stock is generating all-time high free cash flow (nearly $200 million, according to data from S&P Global Market Intelligence). But it's selling for a big discount off its pre-earnings share price -- and that makes now a great time to buy into Etsy.