Please ensure Javascript is enabled for purposes of website accessibility
Log In Help Join The Motley Fool
Free Article Join Over 1 Million Premium Members And Get More In-Depth Stock Guidance and Research
By Jason Hall – Updated Sep 17, 2019 at 8:16AM

Higher oil prices resulting from a prolonged outage from one of the world's biggest sources improve the prospects for offshore oil. At least that's what Mr. Market seems to think today.

Shares of most of the world's biggest offshore drillers are rocketing higher today following attacks over the weekend on Saudi Aramco's Abqaiq oil processing facility, which immediately impacted a massive 5% of global oil flows and sent crude oil prices gushing higher. As of 12:28 p.m. EDT, both Brent and West Texas Intermediate crude oil benchmarks were up 12%. That is a massive gain for oil prices in a single trading day, demonstrating how enormous the potential implications could be for global oil markets. 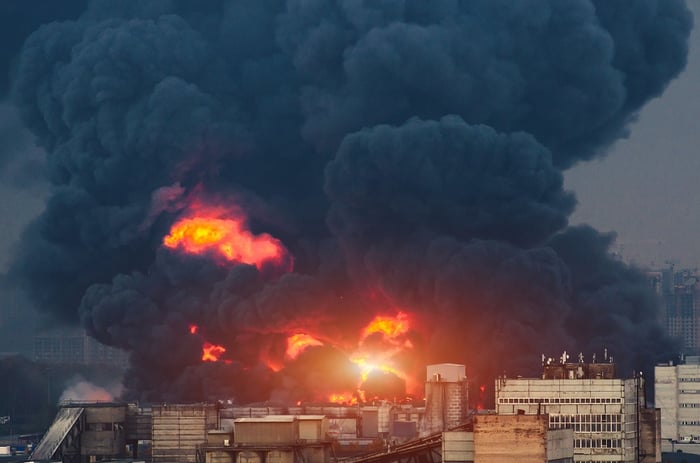 It's still early in the story, but Saudi Aramco reportedly immediately shut down half of its total oil production as it assesses the damage at the Abqaiq processing facility and determines how much -- and for how long -- its output will be impacted.

There's some expectation that one-third of the facility's production capacity would be brought back online as soon as today, there remains substantial uncertainty surrounding the vast majority of its processing capacity. And that could have a profound impact on global oil supplies in the months to come.

How does all of this affect offshore drillers? On the one hand, higher oil prices are generally a good thing for offshore oil. These resources require far more up-front capital to develop, so being able to realize a higher selling price increases the payoff.

On paper, that's excellent for offshore's prospects. The rub is, investors shouldn't expect oil producer executives to call emergency meetings to approve more spending to develop offshore resources. Simply put, even a needle-moving event like this weekend's attacks may not prove a sustainable catalyst for offshore development.

The immediate beneficiaries are likely to be U.S. onshore oil producers, which can begin immediately realizing the benefits of today's huge jump in oil prices.

But that's not to say that today's surge makes offshore a bad investment. To the contrary, I'm bullish on the sector and think it's generally still undervalued even after today's big price gains. Producers have steadily increased their commitments to developing offshore resources, and higher oil prices should only help them remain committed to those investments.

Here's the catch: If you invest in any offshore drilling stock, be prepared for more future volatility, including potentially big down days, especially if Saudi Aramco is able to quickly bring Abqaiq back on line. If you're willing to ride out those ups and downs, and also able to take on some risk that offshore doesn't continue to rebound, I think the entire sector makes an excellent risk/reward investment over the next three to five years.