But wouldn't that cash have been better spent on new original shows?

This isn't the first big deal for WarnerMedia -- HBO recently paid $425 million to pull the streaming rights for Friends from Netflix (NFLX 1.36%) for the next five years, and signed a $250 million deal with J.J. Abrams' Bad Robot to produce exclusive shows and films.

These megadeals indicate that AT&T is getting serious about challenging Netflix, Walt Disney (DIS 2.20%), Apple (AAPL 2.29%), Amazon.com (AMZN 2.81%), and others in the streaming race -- but is The Big Bang Theory really worth $1 billion?

The monthly fees for the non-contract services are all over the map, and likely a source of confusion for AT&T's salespeople, customers, and investors:

None of these services is competitively priced. Netflix's standard plan costs $13 per month, Disney's upcoming bundle (which includes Disney+, Hulu, and ESPN+) also costs $13, Apple TV+ will cost $5, and Amazon Prime Video (which is included in Prime subscriptions) costs $9 a month on a stand-alone basis.

AT&T seems to think that HBO and WarnerMedia's content is strong enough to justify its higher prices, but that could be tough since Netflix, Disney, Apple, and Amazon are all producing dozens of high-budget original shows and movies. That's why it's spending so much money to lock in Friends and The Big Bang Theory.

So is The Big Bang Theory worth $1 billion?

The Big Bang Theory, which ran for 12 seasons, between 2007 and 2019, attracted an average of 17.3 million viewers in its final season and was the most-watched scripted series on TV. That massive audience guarantees that the show's move to HBO Max will attract some subscribers. 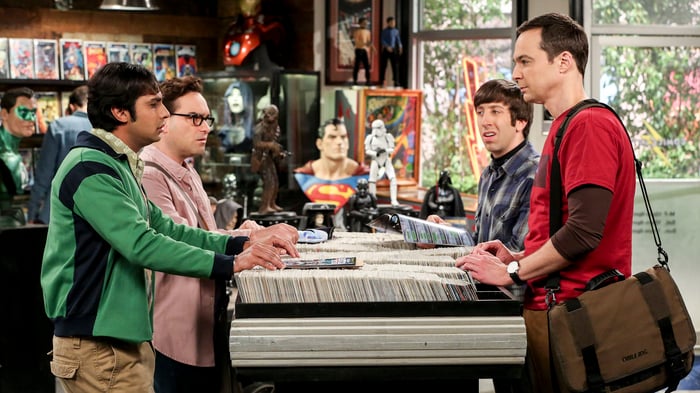 However, it's still unclear if The Big Bang Theory will have the staying power of comedies like Friends and Seinfeld. If it does, HBO Max will gain another way to lock in viewers alongside shows like Game of Thrones, Friends, and The Fresh Prince of Bel-Air. But if it doesn't, AT&T might realize that it would have been smarter to spend that cash on original content.

HBO Max already announced a beefy lineup of original shows like Dune: The Sisterhood, a spin-off of the sci-fi classic Dune; the Nicole Kidman-produced Crime Farm; and The Flight Attendant, a mystery series starring The Big Bang Theory's Kaley Cuoco -- but they all face tough, high-budget challengers on rival platforms.

Therefore, it arguably makes more sense for WarnerMedia to produce fresh content instead of buying reruns of popular comedies. Amazon, for example, is spending $1 billion to produce five seasons of its upcoming Lord of the Rings series, and about $7 billion annually on both streaming video and music content.

AT&T secured the bulk of HBO and WarnerMedia's content with its $85 billion takeover of Time Warner, but it can't grow complacent and expect reruns of popular shows like The Big Bang Theory to help it keep pace with its rivals.

AT&T's streaming strategy is still confusing, its platforms aren't competitively priced, and it arguably lacks fresh content that could give it an edge against Netflix, Amazon, Disney, or Apple. Simply put, many customers are probably seeking out the next Stranger Things or The Boys instead of reruns of Friends or The Big Bang Theory.