Please ensure Javascript is enabled for purposes of website accessibility
Log In Help Join The Motley Fool
Free Article Join Over 1 Million Premium Members And Get More In-Depth Stock Guidance and Research
By Keith Speights – Sep 18, 2019 at 6:00AM

Amgen's recent clinical setback just might prompt the big biotech to light a fire beneath its acquisition efforts.

You've probably heard that the best way to deliver bad news is to sandwich it in the middle of positive news. Amgen (AMGN -0.41%) used this approach so well last week that the bad news was hard to spot.

The big biotech issued a press release on Sept. 12 with the headline "Amgen Highlights New Data from Kyprolis (cafilzomib) and Oncology Pipeline at IMW 2019," with IMW2019 referring to the International Myeloma Workshop held in Boston last week. Most of this press release related to updates about Amgen's clinical studies featuring Kyprolis.

But buried in the middle of the announcement was some bad news about experimental multiple myeloma drug AMG 397. Could this bad news increase the likelihood that Amgen will make additional acquisitions to bolster its pipeline? 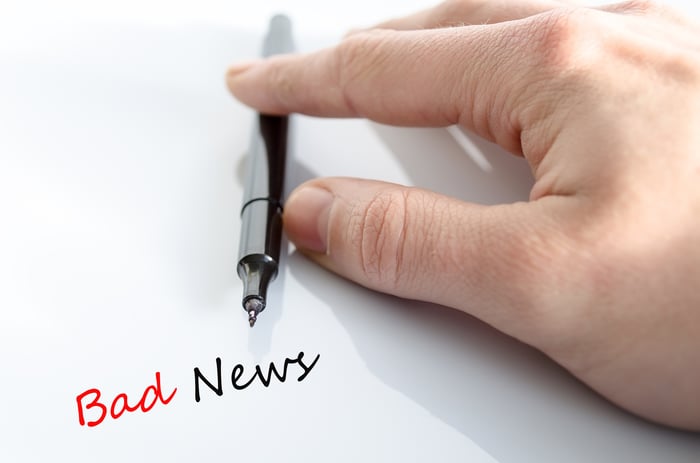 About that bad news

Amgen disclosed that the U.S. Food and Drug Administration (FDA) has placed the phase 1 dose-escalation clinical study evaluating experimental drug AMG 397 in treating relapsed or refractory multiple myeloma on a clinical hold. The company said that this clinical hold was put into effect to "evaluate a safety signal for cardiac toxicity."

That wasn't the only bad news tucked into the press release last Thursday. Amgen also said that it had placed a voluntary hold on new enrollment in a phase 1 clinical study evaluating AMG 176. The company stated that it was taking this action "in keeping with Amgen's commitment to patient safety."

For some drugmakers, clinical holds on early stage studies wouldn't be a big deal. But Amgen's pipeline is heavily skewed toward early stage programs. Of the 32 programs in the biotech's pipeline (excluding its biosimilars in development), 24 are in phase 1 studies.

We really don't know exactly how bad Amgen's bad news is at this point. The company didn't provide any additional details about the nature or severity of the potential safety issues that resulted in the FDA's clinical hold. It's also important to note that clinical holds are often lifted by the FDA, with clinical testing sometimes moving forward without further issues.

But the setbacks for AMG 397 and AMG 176 highlight Amgen's reliance on its early stage pipeline. The biotech has delivered weak or no revenue growth in recent quarters. In the second quarter, Amgen's revenue fell 3% year over year in the wake of sales declines for top drugs Neulasta, Neupogen, and Sensipar.

Amgen does have some bright spots in its current lineup. Osteoporosis drugs Prolia and Xgeva continue to perform well. The company also has high expectations for cholesterol drug Repatha and migraine drug Aimovig. But with several of its best-selling drugs facing intense competition, Amgen needs some help to return to solid growth.

The big biotech recently announced plans to buy Otezla from Celgene. This is an unusual transaction in that successful blockbuster drugs rarely are sold off. Celgene is divesting Otezla, which is approved for treating psoriasis and psoriatic arthritis, to clear the way for its acquisition by Bristol-Myers Squibb. The deal appears to be a win for all three companies and should give Amgen a much-needed shot in the arm.

It's too early to know if Amgen will have to throw in the towel on AMG 397 and AMG 176. However, I think that anything that elevates concerns about its most promising pipeline programs will increase the company's efforts to make more acquisitions or at least license other drugs in development.

Risks associated with clinical trials, especially early stage ones, come with the territory with investing in biotech stocks. Amgen would be in better shape if it had more de-risked assets. CFO David Meline stated at the Morgan Stanley Global Healthcare Conference last week that Amgen will continue to look at potential acquisitions and other business development deals. Perhaps the biggest question for the company is whether it will go big as it's doing with buying Otezla or go small.