Please ensure Javascript is enabled for purposes of website accessibility
Log In Help Join The Motley Fool
Free Article Join Over 1 Million Premium Members And Get More In-Depth Stock Guidance and Research
By Matthew DiLallo – Updated Sep 19, 2019 at 9:22AM

The high-yielding MLP is up big this year.

Enterprise Products Partners (EPD 1.92%) is enjoying a big year. The giant MLP generated $3.35 billion of distributable cash flow through the first half of this year, up 19% versus the year-ago period. That helped drive the company's unit price up 18% so far this year. Add in the MLP's 6.1%-yielding dividend and the total return is a market-beating 23.8%.

Given the big rise in the company's market value, investors likely wonder if it has anymore fuel left in the tank to continue its market-beating ways. Here's a look at the case for and against buying Enterprise Products Partners these days. 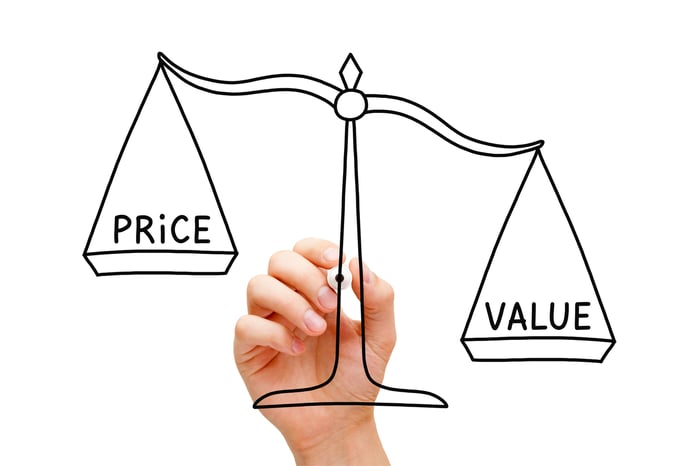 Despite the big uptick in Enterprise's unit price this year, it still trades at a relatively attractive valuation. The MLP has produced $7.8 billion of adjusted EBITDA in the past 12 months. Given its current enterprise value (EV) of $90.8 billion, it trades at an EV/EBITDA multiple of 11.6 times. While that's right around the peer-group average, it's well below the 14 times multiple of rival ONEOK (OKE 0.79%).

One reason ONEOK trades at such a lofty valuation is its growth prospects. The midstream company currently has $6 billion of expansion projects underway, which have it on track to grow its EBITDA by 7% this year and at a greater than 20% rate in 2020. Enterprise Products Partners, however, also has excellent growth prospects. The company currently has $6 billion of expansion projects underway and another $5 billion to $10 billion in development. Because of that, the company should grow its EBITDA at a healthy rate for the next several years. As such, it should also trade at a premium valuation like ONEOK. Because that's not the case, the MLP initiated a $2 billion unit repurchase plan earlier this year.

Another big draw with Enterprise Products Partners is its high-yield dividend. The company currently generates enough cash to cover its payout by a comfortable 1.7 times. Meanwhile, it has one of the strongest balance sheets among MLPs. Because of that, Enterprise's distribution is on rock-solid ground. Add that to its growing cash flow and Enterprise should have no problem increasing its payout in the future. That's something it has now done for the last 60 consecutive quarters.

After rallying earlier this year, Enterprise's valuation isn't quite as cheap as it was at the beginning of 2019. Because of that, investors don't have quite as much upside as they did. That somewhat limits the company's total return potential.

Another potential issue is that it has somewhat higher direct exposure to commodity price volatility than some of its peers. Predictable long-term, fee-based contracts currently supply roughly 85% of its earnings. While that's a healthy percentage, and in line with ONEOK's level, it's not quite as good as peers like Williams Companies and Enbridge. Both of those pipeline giants get more than 95% of their earnings from predictable sources. Because of that, a major decline in commodity prices would have a larger impact on Enterprise's cash flow.

The verdict: Enterprise Products Partners is a buy

While Enterprise Products Partners isn't quite the bargain it was earlier this year, it's still an excellent buy for the long term. That's because it offers investors an above-average yield and attractive growth prospects, and trades at a good valuation. Those factors position the energy company to continue producing market-beating total returns in the coming years.