Snap is in talks with media companies to create a dedicated news tab in Snapchat.

Snapchat isn't exactly a reliable source of hard-hitting news, but parent company Snap (SNAP 2.65%) reportedly wants to change that. The disappearing-message company is in talks with media companies to develop content for a dedicated news tab on Snapchat, separate from the existing Discover tab, according to a report from The Information. Discover is chock-full of celebrity gossip and entertainment videos, but not the kind of news people consider "news."

Facebook (META -1.45%), meanwhile, is working to court publishers to its dedicated tab, which it plans to hold up as a source for "trustworthy news." About two-thirds of Americans already get their news from social media, according to a Pew Research poll from last year. Facebook is by far the most popular social media source; 43% of all Americans use it to get news. Just 5% use Snapchat for news.

Facebook is reportedly struggling to get big-name publishers onboard with its plans, but Snap may have better success due to the demographics of its audience.

Why Facebook's having trouble

Facebook's offering publishers up to $3 million for the rights to republish articles in its dedicated news section. That amount could be a big deal to a small publisher of a local newspaper. Facebook will help smaller publications reach a broader audience and pay them for the privilege, no less. What's more, Facebook's efforts may give publishers more leverage to get other tech companies looking to get into news distribution, like Apple, to pay up, as well.

For a big national news publisher, however, the deal isn't as sweet. First of all, the dollar amount isn't as significant to a bigger company. Second of all, the marginal gain over not participating in Facebook's news section isn't as significant for a well-known brand. Additionally, the publisher would be ceding some control of its brand to Facebook, which will be able to place content from a national publisher next to any other content in the ecosystem. Big publishers had similar objections to Apple's new distribution services, Apple TV Channels and Apple News+.

Snap doesn't provide any panacea for those same challenges. It does, however, open the door to an audience that's often harder to reach and less easily monetized through subscriptions -- i.e., young people. That may make certain sacrifices worth it for the bigger publishers pushing back against Facebook. 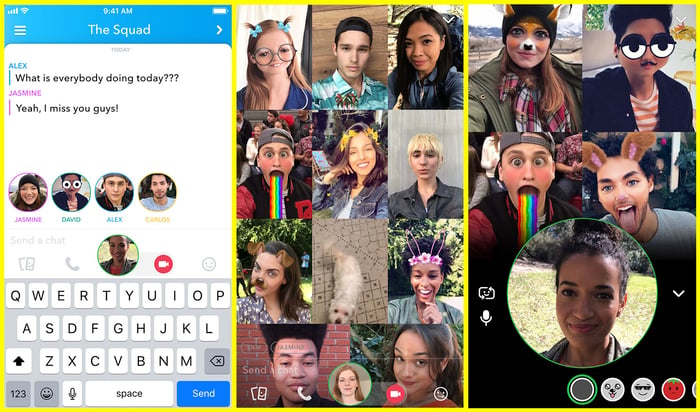 Younger people have shown an interest in more mainstream news when it's packaged differently from the nightly half hour on local broadcast television. Snapchat provides a suitable distribution platform for the snackable video news content they most prefer.

Can Snap actually pull this off?

While Snap may have a stronger pitch to media companies than Facebook, thanks to its relative audience, it's proven quite incapable of changing its users' behaviors. (Remember, just 5% of Americans presently get news from Snapchat.) The app redesign last year that intended to "separate the social from the media" mostly succeeded in separating users from Snapchat.

Many of Snap's Discover partners were hurt by the redesign. That said, Snap has had a lot of success recently with Snap Originals, which continue to see increased viewership.

Snap may want news publishers to create new content specifically for Snapchat like Snap Originals. That would have a greater chance of attracting an audience but also cost a considerable amount more for Snap upfront. Snap is paying between $40,000 and $50,000 per episode of Snap Originals. That's relatively manageable when each series has around 10 episodes. News content comes out every day, multiple times per day, and it doesn't have the same watchability just a few days after its release.

And while Facebook can easily give $100 million to a few dozen news publishers for an experimental news section, that kind of money is harder to come by at Snap. The company's free cash flow came in at negative $103 million last quarter, compared to $4.8 billion at Facebook.

Getting all the ingredients together to succeed with a dedicated news tab is a bigger challenge for Snap than simply attracting media companies to publish their content on the platform. On the other hand, if Facebook can sign a few big-name publishers to its dedicated news tab, it's well-positioned to get users to engage more on the platform by offering both better news content and a better user experience than most digital news readers are used to.