After years of overhang, giant net lease REIT VEREIT is ready to put its legal problems behind it. Now what happens?

The name VEREIT (VER) is supposed to make investors think of the Latin word "veritas," which basically translates to "truth" today. At first blush, that may seem like a funny name for a real estate investment trust (REIT) that has been dealing with the fallout from an accounting scandal since late 2014. Changing the name to VEREIT was, in fact, the first in a long series of steps to put the issue behind the company. Roughly five years later, it is getting close to finally shutting the door on that ugly episode. As it does, the future is starting to look a lot brighter. Here's what you need to know today.

Before the accounting issue, VEREIT was known as American Realty Capital Properties. The REIT's business model could be summed up as "growth at any cost," as it quickly gobbled up peers to create a giant net lease portfolio (lessees of these properties pay most of the operating costs). This approach led to a heavy debt load, an ungainly portfolio of assets, and a culture that made fudging the numbers seem like a good choice. When the accounting issue -- which amounted to a few pennies a share -- erupted, the stock plummeted, new leaders were brought on board, and the dividend was suspended. 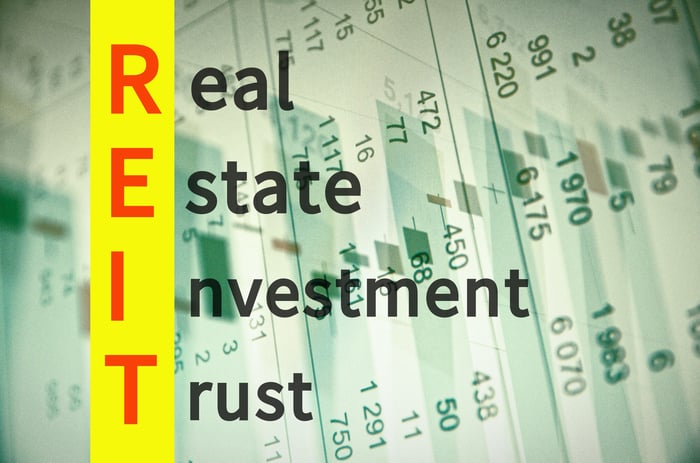 The new CEO, respected industry veteran Glenn Rufrano, stepped in and quickly changed the company's name to tell the world that things were different now. And he backed that up with a plan to turn the REIT around. It was simple in some respects, but it was something to which investors and Wall Street could hold him accountable. To sum up, he wanted to strengthen the balance sheet, prune the portfolio, and reinstate the dividend.

To his credit, VEREIT has lived up to each of these goals. Credit rating agencies have upgraded VEREIT to investment grade. After selling less-desirable assets, the portfolio is smaller but far stronger than it had been. And the dividend is back. The one lingering headwind has been the legal fallout from the accounting issue. But now that, too, will soon be behind VEREIT.

In early September, VEREIT revealed that it had settled what was basically the last of the litigation it faced. Having earlier paid nearly $300 million to settle some of the claims, it appeared that the total cost to finally settle the accounting issue would sum to around $1 billion (not including its actual legal expenses). That was roughly the total at the end of the day. Although there are some remaining loose ends to tie up, like an SEC investigation, the big hit is likely out of the way. And that removes a huge headwind.

But what happens from here? First and foremost, VEREIT has to come up with the cash to pay the settlement. Luckily, it has been preparing for this, paying down a $2 billion revolving credit facility and freeing up now-vital liquidity. That credit facility will be the short-term source of money to settle this debt. After that, VEREIT will have to figure out if it wants to sell stock or issue permanent debt. Credit rating agencies are likely to take a dim view of whatever choice the REIT makes here, and it will have to work hard to clean up its balance sheet again.

As legal expenses fall away, it can put that cash toward paying the cost of the settlement. However, the low-interest-rate environment today actually makes now a pretty good time for VEREIT to issue debt. And with the stock price up by around a third in 2019, selling shares is more alluring than it has been in a couple of years. So management's options here are, luckily, much better than they could have been.

One thing that is unlikely to happen in the near term is a dividend hike. Cost of capital is a very important issue for net lease REITs because they, essentially, make the difference between their rent and the cost of the money they invest. Thus, maintaining an investment-grade rating is vital to keep interest costs down. VEREIT will work hard to preserve its rating, and that means putting cash to work strengthening the balance sheet again. Dividend hikes will likely have to wait until there's material progress here. 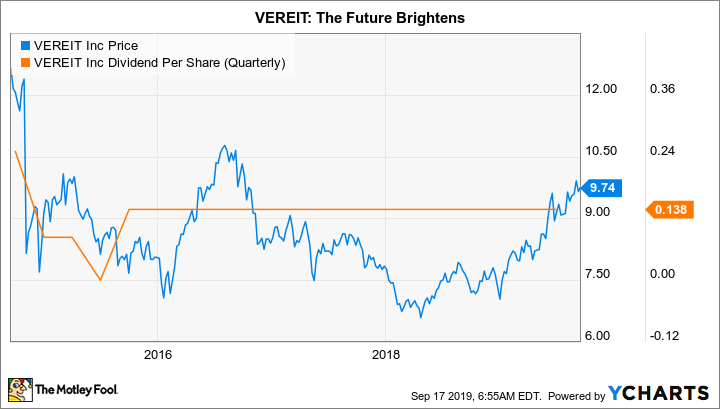 That said, in a conference call announcing the settlement, Rufrano seemed confident that VEREIT could shift back toward growing the portfolio again even while it works through the settlement costs. The low-interest-rate environment was a big part of that assessment. This would be an important shift for the company, which has been selling assets for years to both clean up the balance sheet and better position the portfolio. That said, don't look for a giant change. After selling more than it was buying, VEREIT is likely to inch back toward buying more than it is selling. In other words, purchases might slightly exceed sales at some point in the near future, but not by a huge margin.

Another issue to consider at this point is the Wall Street rumor mill. With the legal overhang behind it, VEREIT's low valuation relative to similar peers will get people talking about a potential takeover. That's not unreasonable, given that the REIT's price to projected 2019 adjusted funds from operations (FFO) is around 14 times compared to roughly 22 for net lease bellwether Realty Income.

But don't get too excited about the prospects of a takeover. VEREIT has a nearly $10 billion market cap and owns a portfolio of roughly 4,000 properties spread across the office, industrial, and retail sectors. It would be a big, complicated fish to swallow, and only a few companies would be capable of getting a deal like this done. And it's likely that even fewer would be interested in the portfolio because of its broad diversification.

Still more work to be done

The settlement has only just been announced, so there's plenty to do before VEREIT's legal issues are really behind it. However, it sets the REIT up for a future that doesn't involve lingering legal headwinds. The steps from here are pretty simple, and investors should be keeping track of progress: VEREIT will have to permanently fund the cost, work to mitigate the impact that has on the balance sheet, shift from shrinking the portfolio to expanding it, and, eventually, start growing the dividend.

None of that will be easy, but at least there's more clarity now. And if Rufrano and his team can execute as well in the future as they have in the past, VEREIT's discount to its peers is likely to narrow. Dividend investors sitting on the sidelines here because of the accounting mess might want to take a second look at VEREIT and its 5.6% yield today.