The company's smaller restaurant groups again diluted the success of its larger chains.

Darden Restaurants (DRI -1.27%) launched its new fiscal period with results that fell behind the pace needed to meet its own financial performance goals for the year. In addition, the restaurant holding company saw imbalanced results among its various brands, as the segment holding several smaller restaurant chains turned in weaker sales growth against the Olive Garden, Texas LongHorn Steakhouse, and fine-dining segment. As we break down the quarter, note that all comparative numbers are presented against the prior-year quarter. 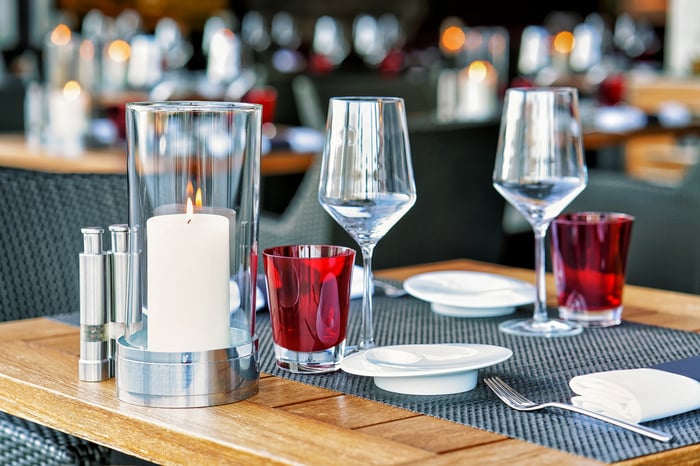 Though investors were wary of the anemic comps -- shares were down 5% at midday on Thursday -- CEO Gene Lee pointed out that the company was able to take market share from competitors during the period. Lee stated the following in Darden's earnings press release: "I'm pleased with our results this quarter as we continued to gain market share. Our teams remained focused on improving the guest experience by focusing on our back-to-basics operating philosophy and leveraging our competitive advantages, all while managing costs effectively."

Despite a faltering start to fiscal 2020, Darden has fared well among restaurant stock investments this year. Even factoring in today's share decline, the DRI symbol is up roughly 22% year to date. Going forward, management reaffirmed that it intends to hit the various full-year targets mentioned above, including 5.3% to 6.3% revenue growth, 1% to 2% comps growth, and diluted EPS of between $6.30 and $6.45 (representing 11% expansion at the midpoint). Executives will undoubtedly focus on noncore brands in the coming quarters to reduce their drag on total company performance and to ensure that Darden does indeed make good on its fiscal 2020 guidance.