Big tech hasn't given up on AR yet.

Augmented reality (AR) may be the next widespread technology breakthrough for consumers, and it's closer than you may think. AR capabilities are already on most smartphones, and stand-alone headsets are starting to be developed for consumer and industrial uses.

Microsoft's (MSFT 3.61%) Hololens 2 headset is the leading device for industrial applications, and Magic Leap has started shipping a headset it thinks will wow consumers. But the companies I think investors should keep an eye on in AR are Facebook (META 2.51%), Snapchat (SNAP 1.73%), and Apple (AAPL 3.50%). Here's why they may already be leaps and bounds ahead of the competition. 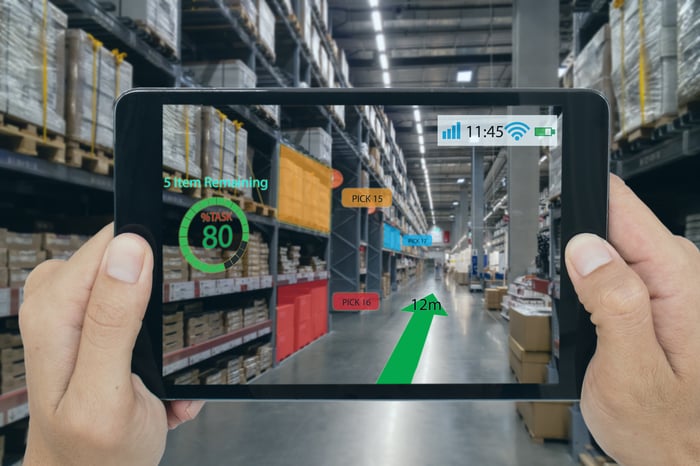 Augmented reality hasn't been at the forefront of investors' minds when it comes to Facebook, but the company has been spending a lot of time building AR capability in the background. It has launched AR filters for Instagram, and build development tools like the Camera Effects Platform and Spark AR Studio for developers.

With the Facebook app and Instagram, Facebook has both the ability to reach billions of people with AR technology and the incentive to use these new tools to keep people engaged. Facebook could either develop new functionalities itself or serve as a platform distributor for others through its popular apps. Either way, Facebook has a lot of opportunities in AR.

Arguably the leader in augmented reality today is Snapchat, which pioneered filters and interactions using its facial recognition technology. I recently covered their $1 billion capital raise, which they said would go partly to developing AR technology.

Unlike Facebook, Snapchat is interested in getting into the hardware business, and that's where I find the company very intriguing. Spectacles 3 are now able to capture depth in images with two cameras. The depth capability now being included in smartphones could be great for AR capture.

What would really change the game is if Snapchat started to build an AR display onto Spectacles. It could give a live image of the playful tools it has created, which could be used for myriad applications from consumer uses to advertising to industrial applications. Snapchat is quietly building some of the best AR technology in the world, and I wouldn't sleep on it long-term.

The giant waiting in the wings in AR is Apple. The company has had AR tech in iPhones for years, but may now be moving into specific AR hardware. Developers have found code in iOS 13 that indicates Apple is working on an AR headset of some kind. We don't know any details yet, but we know that iPhones come standard with AR capabilities, so a headset would be a logical extension.

What's disruptive about Apple in AR is that it can overshadow competitors in a heartbeat. Magic Leap and Microsoft have worked for years to develop AR headsets and have very few in service, but Apple has the brand and retail outlets to bring an AR headset to the masses. We don't know if it will, but it's arguably the most important company to watch in augmented reality, and there are now hints that a headset will be here sooner than later.

A big market up for grabs

Digi-Capital estimates that mobile AR was a $3 billion market in 2018 and could be worth $70 billion to $75 billion by 2023. That's a big market to grab hold of if companies can build the hardware and content that people want. Facebook and Snapchat have a head start in content, while Apple is an intriguing company on the platform and hardware side. Time will tell who is able to capture this massive market opportunity.