Please ensure Javascript is enabled for purposes of website accessibility
Log In Help Join The Motley Fool
Free Article Join Over 1 Million Premium Members And Get More In-Depth Stock Guidance and Research
By Keith Speights - Updated Sep 23, 2019 at 9:13AM

Success is in these three great healthcare stocks' DNA.

You might be reluctant to consider investing in healthcare stocks in the current climate. Politicians in Washington are talking about drug pricing reform. Presidential candidates are proposing massive changes to the U.S. healthcare system. There are worries that a recession could be on the way.

But I think now is a great time to invest in healthcare -- if you pick the right stocks. There are quite a few healthcare stocks that should be relatively insulated from all the aforementioned concerns. Here's why three of the top healthcare stocks that you can buy right now are Guardant Health (GH 3.29%), Illumina (ILMN 0.65%), and Vertex Pharmaceuticals (VRTX 3.77%). 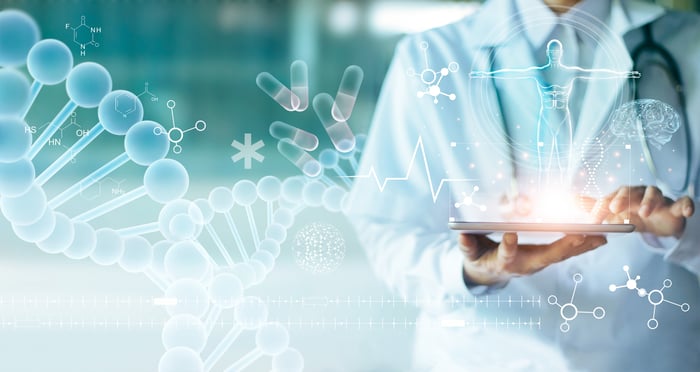 After skyrocketing more than 190% this year, Guardant Health is now over 30% below its high point. But nothing has materially changed about the company's prospects.

Guardant Health is a leader in developing liquid biopsies, simple blood tests that can detect tiny fragments of DNA that have separated from tumors. The potential for liquid biopsies to identify cancer at very early stages has many in the medical community really excited.

The great thing about Guardant Health is that it already has multiple liquid biopsy products on the market. Its lead product, Guardant360, helps physicians determine the appropriate therapy for patients with advanced-stage cancer. GuardantOmni is used by drugmakers to screen patients for clinical trials of cancer drugs. The company's Lunar assays, which currently are available for research use only, can help detect early stage cancer and recurrence of cancer.

Guardant Health thinks that the addressable market for its products in the U.S. alone is more than $50 billion. Some think that the global liquid biopsy market could top $100 billion. I think both numbers are realistic. And while there will be other players in the liquid biopsy market, I like Guardant Health's head start and see it as a solid pick for long-term investors.

Illumina reported disappointing second-quarter results in July, wiping out a nice year-to-date gain. But the reasons behind the lower-than-expected revenue should be only temporary.

The company's long-term future continues to look very bright, in my view. Illumina is a pioneer in the gene-sequencing world. Its technology helped slash the cost of mapping a human genome. More significant cost reductions could be on the way with Illumina's NovaSeq platform, making gene sequencing more affordable to a larger number of customers.

Illumina has multiple growth opportunities. Liquid biopsies are one of them. Products such as those developed by Guardant Health require gene sequencing of patients' DNA and the DNA fragments in blood samples. You could look at Illumina as a pick-and-shovel provider in the gold rush of liquid biopsies.

Cancer-related genomic research and products probably represent the most significant opportunity for Illumina. Other growth drivers for Illumina include consumer genomics products such as the ones marketed by Ancestry and 23andMe (both customers of Illumina) and large-scale population genomics initiatives in various countries around the world. A genomics revolution is under way -- and Illumina should remain a leader in that revolution.

Vertex Pharmaceuticals ranks as my favorite biotech stock on the market. The company enjoys a virtual monopoly in treating cystic fibrosis (CF) with its three approved drugs Kalydeco, Orkambi, and Symdeko. That monopoly should grow even stronger in the near future.

FDA approval of Vertex's new triple-drug CF combo is expected by March 19, 2020. EvaluatePharma thinks that this combo is the most valuable pipeline candidate in development with projected annual sales of $4.3 billion. Vertex expects the triple-drug regimen to expand the number of eligible CF patients for its drugs by more than 50%.

I like that Vertex is looking to move outside of CF as well. The company is targeting several non-CF indications, including pain management along with genetic diseases alpha-1 antitrypsin deficiency, beta-thalassemia, Duchenne muscular dystrophy, and sickle cell disease.

Vertex also spent $950 million to acquire Semma Therapeutics in the hope of scoring its greatest achievement of all -- curing type 1 diabetes. Semma has a preclinical therapy that has shown promise in animal studies. I'm not banking on the attempt to cure type 1 diabetes necessarily panning out, though. Vertex's growth prospects in CF, pain, and rare genetic diseases are big enough on their own to make this biotech stock a great pick.