If there were a hall of fame for biotech stocks, Biogen (NASDAQ:BIIB) and Amgen (NASDAQ:AMGN) would be in it. Biogen made its mark with multiple powerful multiple sclerosis (MS) drugs that fueled its remarkable rise. Amgen was one of the first biotechs on the scene back in the early 1980s and has reeled off a string of blockbuster drugs targeting a range of diseases.

But both Biogen and Amgen find themselves in a much different position than they've been accustomed to in the past. The big biotechs face significant challenges. Which is the better choice to survive and thrive in the future? Here's how Biogen and Amgen stack up against each other on several key fronts. 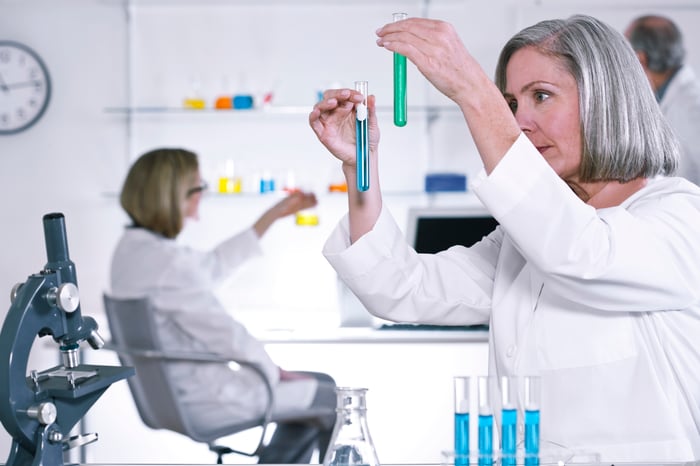 Biogen delivered year-over-year revenue growth of 8% in the second quarter. That performance was much better than Amgen's 3% revenue decline during the same period. But the reality is that both biotechs have some weaknesses.

The primary concern for Biogen is that its MS franchise isn't generating much sales growth. Biogen's biggest source of growth in this arena is from royalties it receives from the sales of Ocrevus, which is marketed by Roche. Sales are slipping for Biogen's interferon products Avonex and Plegridy. Tecfidera and Tysabri are only growing modestly.

Biogen also is getting some help from spinal muscular atrophy (SMA) drug Spinraza. However, the rate of growth for the drug is tapering off. Spinraza also faces competition from Novartis' gene therapy Zolgensma. And while new biosimilars are also boosting revenue for Biogen, the year-over-year growth comparisons probably won't look nearly as good in 2020 as they have this year.

Amgen is in an even tougher spot. Sales are sliding for Neulasta and Epogen in the wake of biosimilar competition. This threat is also taking a toll on sales of Aranesp. Meanwhile, sales are downright plunging for calcium-reducing drug Sensipar with a generic rival taking away market share.

Perhaps the best news for Amgen is its pending deal to buy Otezla from Celgene for $13.4 billion. The blockbuster psoriasis and psoriatic arthritis drug became available after regulators required its divestiture before Bristol-Myers Squibb could complete its acquisition of Celgene.

Amgen's pipeline wins in terms of sheer numbers, with 38 candidates compared to 27 candidates for Biogen. Both companies have five programs in late-stage development, with Biogen and its partner Alkermes also anticipating FDA approval for MS drug BIIB098 later this year. If approved, though, BIIB098 is likely to cannibalize sales of Tecfidera to some extent.

However, Amgen's pipeline is heavily weighted with early stage programs. As a result, Biogen's overall pipeline is more advanced than Amgen's is and therefore arguably less risky.

Both companies have some iffy candidates. Biogen, for example, has two experimental Alzheimer's disease drugs in late-stage testing after a major flop for aducanumab in treating the disease. Amgen already threw in the towel earlier this year for its own late-stage Alzheimer's disease candidate. The big biotech also recently reported bad news for a promising early-stage multiple myeloma drug.

The late-stage failure for aducanumab caused Biogen's shares to tank. As a result, the stock is cheaper than it's been in a few years. Biogen handily beats Amgen on most valuation metrics.

It's no contest between these two biotechs, however, when it comes to financial strength. Amgen has a cash stockpile of $21.8 billion, well above Biogen's cash position of $3.1 billion. Even with Amgen spending a big chunk of money to buy Otezla, it will still have a lot more cash than Biogen does. Amgen also generates nearly twice as much free cash flow as Biogen does.

My view is that Biogen has a slight edge on current product lineup right now. Some growth is better than going in the wrong direction like Amgen has. However, gaining Otezla will up Amgen's game considerably. And Amgen has more up-and-coming programs than Biogen does. I suspect that Biogen's current advantage might not last very long.

I also think that Biogen's pipeline is a little stronger for the time being. But Amgen's early stage cancer drugs could change this dynamic if many of them advance into later clinical studies.

Biogen has a more attractive valuation as well. That leaves Amgen clearly ahead in only one area -- its financial position. Is this enough to make Amgen the better pick over Biogen? Not at this point, in my view. Again, though, the pendulum could easily swing the other way.

I think that Biogen is very narrowly the better stock over Amgen -- for now. But I personally wouldn't go with either of these biotech stocks. My take is that there are simply too many other choices that offer stronger growth potential with less risk.