Boeing (NYSE:BA) CEO Dennis Muilenburg recently spoke at an investor conference, and what he had to say is worth following closely. Largely, the update was positive, but there were some warnings signs that suggest Boeing and the aviation industry -- a strong point in the industrial sector this year -- might not be immune to the forces impacting the economy.

Let's take a look at the five key takeaways from the presentation.

1. The reintroduction of the 737 MAX is on track

Muilenburg reiterated his belief that the 737 MAX would return to service (RTS) in the "early fourth quarter" and stated that "the principal schedule risk on that continues to be regulator alignment around the world and regulator approvals." In other words, Boeing is on track with its part of the process. 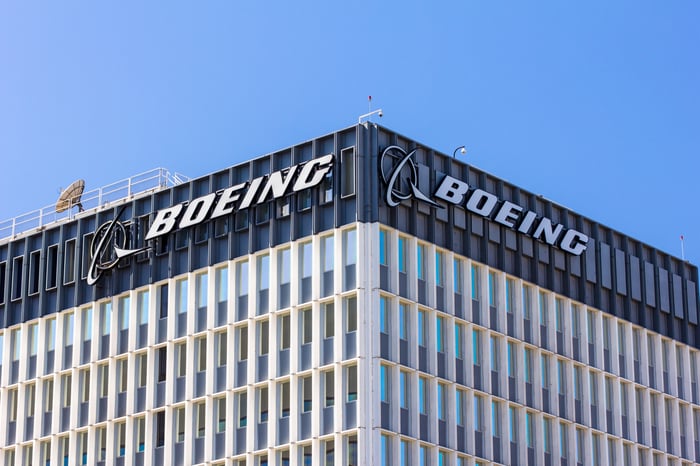 Of course, an early RTS is crucial to Boeing, as it will enable the company to ramp up production of the 737 from the reduced rate of 42 a month to at least the 57 a month initially planned for 2019. A failure to return could lead to a halt in production -- more on that later.

Furthermore, Muilenburg discussed some of the additional work that Boeing has been doing to enhance safety on the 737 MAX. The primary purpose was to enhance the Maneuvering Characteristics Augmentation System (MCAS) software, a system designed to enhance the pitch stability of the plane. As a reminder, the two high-profile 737 MAX crashes occurred when, as part of a chain of events, faulty data from the angle-of-attack (AOA) sensor triggered MCAS to repeatedly lower the nose of the plane. AOA sensors are effectively vanes on the side of the aircraft that measure the angle of the plane relative to a reference point.

Boeing's software enhancement will ensure that MCAS will no longer activate based on just one AOA sensor's data -- or if there is significant disagreement on the data from the sensors. It also stops MCAS being triggered repeatedly based on one data event, and MCAS won't be able to "command more stabilizer input than can be counteracted by the flight crew pulling back on the column," according to Boeing.

Muilenburg said Boeing has had 600 flights with the updated MCAS software. In addition, Boeing has made "a holistic systemwide evaluation and update to the MAX."

If Muilenburg is right about an RTS in October, that's good news for Boeing suppliers -- not least General Electric (NYSE:GE), whose joint venture with Safran, CFM International, manufactures the LEAP engine for the 737 MAX. GE is hoping for an early RTS because it needs the cash flow from LEAP shipments and future engine aftermarket revenue.

2. General Electric and United Technologies must be patient on the NMA

The 737 MAX difficulties -- which have caused a blue-chip stock to lose its way in 2019 -- also appear to be delaying a decision on a launch of the New Midsize Airplane (NMA), and that's possibly a source of frustration for potential suppliers. GE and United Technologies' (NYSE:RTX) Pratt & Whitney are believed to be competing to be the sole engine supplier on the aircraft. Muilenburg was asked about the NMA, and he made it clear that the 737 MAX is the company's main priority right now.

3. The 737 MAX could see a phased return to service

While the target of an RTS in October is still in place, it's becoming clear, in Muilenburg's words, that "different regulators have different sets of questions and concerns." Moreover, he explicitly acknowledged that there was a "possibility of a "phased un-grounding of the airplane among regulators around the world."

Such an eventuality, say with a delayed decision from the European Aviation Safety Agency, could also impact Boeing's plans to ramp up production again. In other words, Boeing's prospects don't rely solely on the Federal Aviation Administration in the U.S.

4. Production ramp-up on the 737 aircraft

The company finds itself in a highly unusual situation right now. If the 737 MAX gets back in flight in due course, then Boeing will be aiming to boost overall 737 production to 57 per month next year from 42 per month at present. However, if the RTS doesn't happen, Muilenburg has previously held open the prospect that the company could temporarily halt production rather than cut it further.

This naturally raises questions over the feasibility and ease with which a production increase can be made, particularly in light of the position in which it puts suppliers.

Muilenburg sounded a confident tone, arguing that "We've used this window over the last few months here, running at 42 a month to invest in the stability of the production system," which should make it easier to ramp 737 production to 57 a month in 2020.

5. Boeing is assuming orders from China that might not come

On a less positive note, the CEO noted that Boeing wasn't immune to the trade war with China, particularly as "We have reserved slots in our wide-body production lines, both 777 and 787, for Chinese orders. And there is dependency there on Chinese orders ultimately coming through."

Putting it all together, it's clear that the near-term risks are rising for Boeing. The timing of the RTS of the 737 MAX -- whether phased or not -- is still in question, and it's hindering Boeing from achieving other aims. Meanwhile, the trade conflict threatens the company's hopes to receive wide-body orders in the near future.

On the other hand, the company's long-term future remains bright, and Muilenburg's confidence regarding the company's progress on regulatory issues and the potential production increase of the 737 is reassuring for investors. Hopefully, the company will get back on track with an RTS for the 737 MAX in October.