Wearers can access all the same Alexa offerings -- like news and weather summaries, purchases, and control of smart home devices -- featured on the Echo speakers. Unlike most other smartglasses, though, the Echo Frames look like a typical pair of glasses. Customers can also add prescription lenses by taking the Frames to an optician.

Amazon calls the Frames a "day one" product for tech enthusiasts which can only be bought via an invitation, indicating that it isn't too confident in the device's mainstream appeal. I personally think that this odd device will flop, for seven simple reasons.

2. There's no camera, either

The device doesn't have AR features because it doesn't sport a camera for capturing photos and videos like Snap's (NYSE:SNAP) Spectacles. That's odd, since Amazon recently added new visual search features to its core shopping app, and partnered with Snap to let shoppers search products with Snapchat pictures.

Amazon likely didn't add a camera or display due to privacy, cost, and appearance concerns -- all of which sank the original Google Glass. However, a pair of "shopping glasses" for looking up prices of products on Amazon could win over some mainstream customers, and cause "showrooming" headaches for brick-and-mortar retailers.

3. Using speakers instead of headphones

Amazon claims that it installed directional speakers on the Echo Frames instead of headphones so users could still hear the ambient sound around them. It claims that the setup "minimizes" the sound heard by people nearby, but it would likely make the device awkward for taking private phone calls and listening to music.

There are already plenty of devices -- like Sony's (NYSE:SONY) sports WS-series Walkman MP3 headphones -- that let a user either block or allow ambient noise through. Using that technology, instead of awkward speakers, would have made more sense.

Sony's Walkman headphones, which were initially launched two years ago, played about 12 hours of audio on a single charge. Amazon's Echo Frames can only play three hours of continuous audio, and last about 14 hours on standby -- which means that it will need to be charged daily. 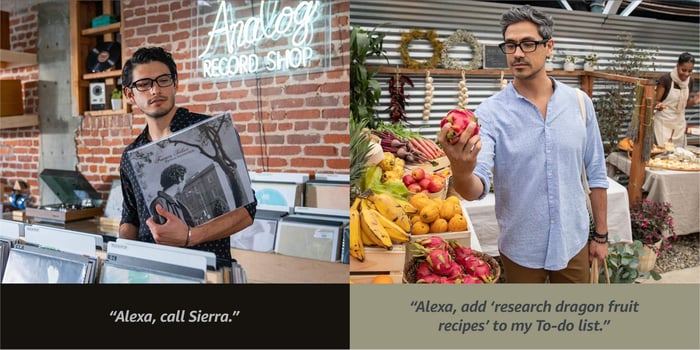 5. Smartwatches and Bluetooth headphones are smarter

The Frames' audio notification feature also seems like a clumsy way to access notifications compared to smartwatches, which already provide quick notifications for people who don't want to reach for their phones. People who want to make calls and listen to music will also likely stick with Bluetooth earbuds instead.

The Echo Frames will only be compatible with Android devices, which is odd because the Alexa app -- which syncs to the device -- is available on iOS.

Apple's (NASDAQ:AAPL) iPhone owners account for 41% of the U.S. smartphone market, according to Counterpoint Research, and are typically more affluent than Android device owners. Locking itself out of that market seems like a silly move for Amazon.

The Echo Frames will cost $179.99 during an "introductory period," after which Amazon plans to raise the price to $249.99. That makes it much pricier than any of its current-gen Echo devices. For the same price, customers could simply buy a mid-range smartwatch and a pair of Bluetooth headphones -- which would accomplish many of the same tasks as the Echo Frame.

Amazon probably doesn't expect the Echo Frames to succeed. Instead, it represents an experimental expansion of its hardware ecosystem, which already includes myriad versions and variations of its Echo, Echo Show, and Fire TV devices.

Amazon doesn't sell these products to make profits, it sells them to expand Alexa's reach and tighten its grip on Prime subscribers. Research firm CIRP estimates that there are now over 100 million Prime members in the U.S., and those subscribers typically spend $1,400 annually on Amazon, versus just $600 for non-Prime shoppers.

Yet the Echo Frames still feel like a missed opportunity. The design choices are timid and odd, and don't include any of the forward-thinking features which Facebook is reportedly developing for its Stella and Orion glasses. For now, investors should ignore the Echo Frames (and the similarly experimental Echo Loop smart ring) and focus on the growth of Amazon's core commerce and cloud businesses instead.