Great companies can fall on hard times -- or their stocks can fall due to the fear of hard times. Yet well-managed companies with winning business models tend to do well in the long run. So when an industry leader experiences a big sell-off due to near-term concerns, it could be an opportunity for the long-term investor.

In recent weeks, three industry leaders -- Netflix (NASDAQ:NFLX), Interactive Brokers (NASDAQ:IBKR), and Ulta Beauty (NASDAQ:ULTA) -- have all seen their stocks take big price hits. However, as you can also see, these industry leaders have absolutely trounced the overall market over the longer run. 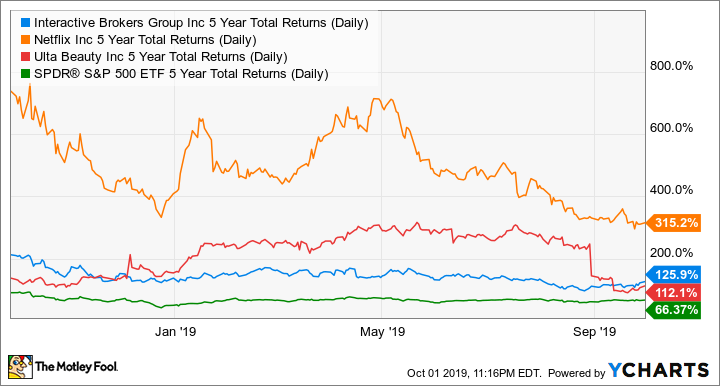 Could these stocks' September swoons make for big October bargains?

It's not hard to figure out why Netflix has been sold off recently. Streaming competition is coming and in a big way. Virtually all of the legacy media companies have merged into bigger and stronger competitors, and all are on the verge of selling their own massive streaming packages, starting either this fall or in early 2020. Some are even taking back hit shows from Netflix that had garnered huge viewership for the streaming leader in the past. 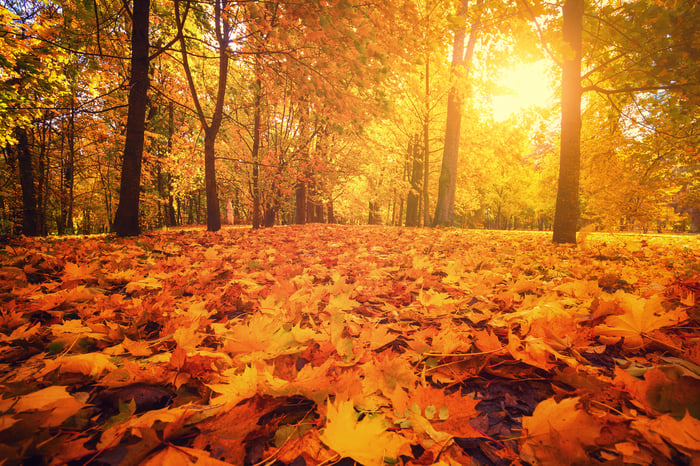 Those competitive fears were acknowledged by Netflix CEO Reed Hastings in a recent interview with Variety, When he admitted the streaming sector would be entering "a whole new world" in November. That's when Apple's Apple TV+ and Disney's Disney+ streaming services hit the market, followed by Comcast's Peacock streaming service and AT&T's HBO Max in early 2020.

That sounds daunting, and this incoming competition has caused Netflix's stock to give up all of its gains for 2019. Currently, the stock sits in the mid-$200s, far below the all-time high of $423 per share set back in mid-2018. 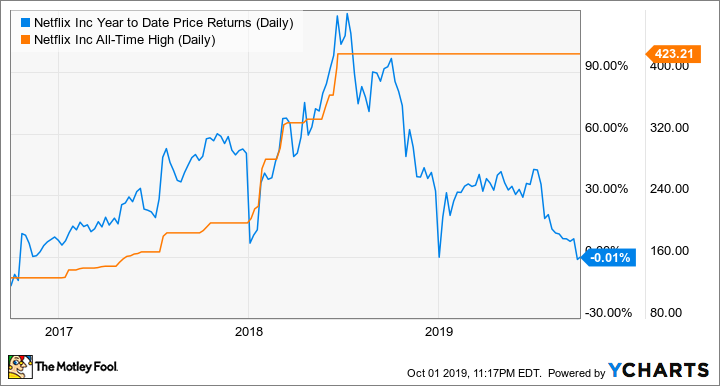 Yet there's also reason to think Netflix can weather the storm. Netflix still has the outright streaming subscriber lead, at 151 million global subs as of last quarter. With that lead, Netflix can afford to shell out big bucks for new original content. And it's doing just that, with content spending set to rise from $12 billion last year to $15 billion this year -- well ahead of nonsports competitors.

In addition, Netflix's service is still reasonably priced for the value of its content, even after a recent $2-per-month subscription price hike. HBO Max will price around $17 a month, according to reports. While Apple's service will only cost $4.99 a month, it won't have nearly the amount of content Netflix does. And at that incremental price, Apple likely won't cause people to cancel their $12.99 monthly Netflix subscription anyway. The most impressive competitor may be Disney. Disney+ will only be $7.99 a month, though a bundle including ESPN+ and ad-supported Hulu will only cost $12.99 per month -- the same as Netflix.

However, these new services may be more of a threat to traditional cable than to Netflix. After all, signing up for three or four new services will likely still be cheaper than the traditional cable bundle, and there were still almost 90 million U.S. pay-TV households at the end of 2018. While one or two companies might see their streaming bundles left out, Netflix is still likely to be the first to which people subscribe.

Netflix has been through many trials over its corporate life, from the tech bubble bursting in 2000 to the 2011 Qwikster debacle, so I think the company will continue to find a way to win even in this "new world." That makes its shares look attractive today, down about 36% from all-time highs.

Another industry leader feeling the heat of competition is Interactive Brokers. Like Netflix, Interactive Brokers is chaired by a very invested founder and operator, Thomas Peterffy. While Peterffy stepped back from CEO duties early this year, he's still chairman, and he still owns about 80% of the company's shares.

Interactive Brokers has long had a low-cost advantage in the brokerage world due to its emphasis on technology and automation. However, over the past couple of years, an intense price war has erupted, with upstart Robinhood attempting to disrupt the industry by offering free equity trades. That has prompted other discount brokers to follow in slashing prices, and even big banks such as JPMorgan Chase & Co. have gotten into low-priced trades with its You Invest platform.

In September, Interactive Brokers announced a commission-free service called IBKR Lite. Then, on Oct. 1, rival discount firm Charles Schwab (NYSE:SCHW) announced it too would be slashing commissions on all U.S. stocks and ETFs to zero, causing a massive sell-off across all discount brokers that day. 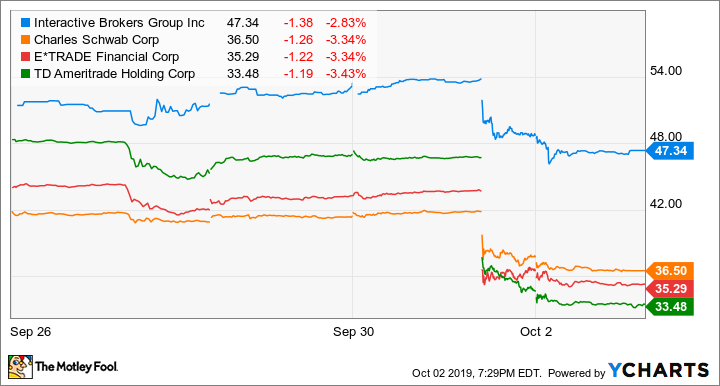 While competitors pricing their services at zero may seem like a doomsday scenario, there's reason to think Interactive Brokers can weather the storm -- and might actually benefit in the long run.

First, investors should know that trading commissions aren't Interactive Brokers' main money-maker. In fact, it's not even close. Commissions only made up 20% of gross revenue and 43% of net revenue last quarter. The majority comes from net interest income on margin lending, where Interactive Brokers still maintains a competitive advantage.

Interactive Brokers' margin rate is just 2.5 percentage points above the federal funds rate, but it decreases with larger and larger loan sizes. That comes to less than half the rate charged by virtually every other online broker and even bests alleged disruptor Robinhood.

Second, it's not as if all trading commissions will go away. Interactive Brokers will still make money on IBKR Lite by selling order flows to professional traders. This is standard practice for Robinhood and other brokers but not something Interactive Brokers had done in the past. The sale of order flow usually causes the end client to miss out on the very best possible trade execution, with a small margin going to professional trading houses that buy these orders. So while investors might think their trades are actually free, they are actually paying this hidden fee on all "free" trading platforms.

Interactive Brokers is still keeping its original paid service that doesn't sell orders, and it uses advanced algorithms to obtain the best price execution across exchanges; however, the main service will now be labeled IBKR Pro. Keeping that original service and dividing the two is a smart move. Not only will this bring in all types of investors, but it could also serve to highlight Interactive Brokers' differentiated Pro service from others.

I expect Interactive Brokers to be only slightly affected by the switch to zero commissions, if at all. Meanwhile, this industry leader continues to grow, reporting a 16% year-over-year and 1% monthly increase in client accounts in September. 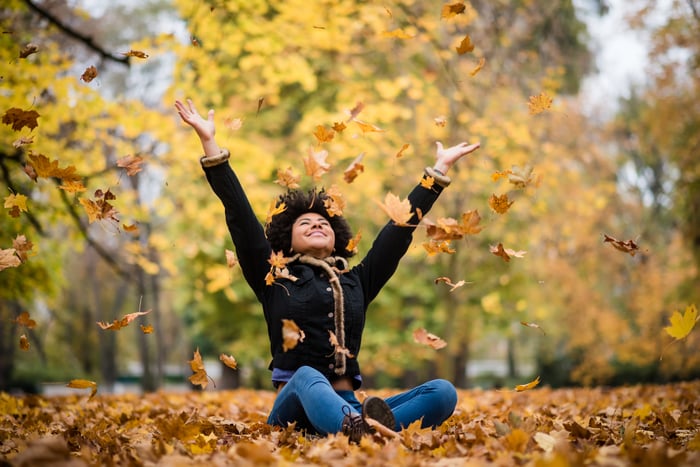 Nevertheless, Ulta still forecasts some growth this year, just not as much as prior expectations. Management now predicts same-store sales growth of 4% to 6% in 2019, down from prior guidance of 6% to 7%. Still, this is really impressive in a (temporarily) declining industry. The outperformance is evidence of Ulta's competitive advantages, which allow it to take market share from competitors.

Recently, two insiders backed up their long-term belief in Ulta with their pocketbooks. Between Sept. 26 and Sept. 30, director Charles Heilbronn, who works for Chanel, bought a massive $60 million in Ulta stock on the open market, at prices not too far below where shares are now. CEO Mary Dillon also bought more shares on the 26th -- not quite as many as the obviously wealthy Heilbronn but still a good-sized quantity worth $308,000 at just over $237 per share.

It's probably not the worst idea to invest along with these two knowledgeable insiders, especially since Dillon has overseen Ulta's market-beating run over the past five years.