Recently, AT&T (NYSE:T) announced that its WarnerMedia wing would be scrapping prior plans for a three-tiered streaming service, instead rolling all of its content into a single offering for roughly $16-$17 per month. Now we know the name of the new service, the general release date, and at least some sought-after content that will soon be on it.

Get to know HBO Max

The new service will be called "HBO Max," as AT&T is opting to name the offering after its strongest subscription brand in HBO, or Home Box Office. HBO was really the first cable station to wander into edgy, premium content that could rival that of feature films.

According to The Wall Street Journal, Robert Greenblatt, chairman of WarnerMedia (AT&T's name for its media division after it acquired Time Warner last year), said that, "it's going to be a position of strength" to be aligned with "one of the great brands in television around the world." According to the Journal, HBO Max will launch in the Spring of 2020. 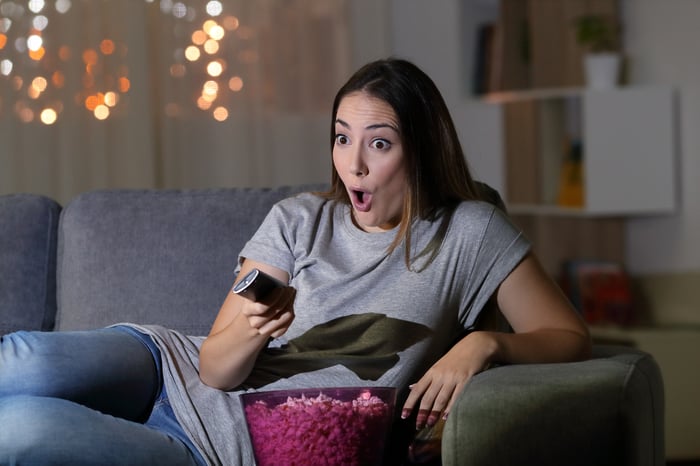 Although well-funded rivals have sprung up, especially Netflix (NASDAQ:NFLX), HBO is still regarded as one of the leaders -- if not the leader -- in premium cable content. It's coming off of the record-setting blockbuster series Game of Thrones, whose series finale garnered a whopping 19.3 million views, a record for a premium cable show.

Unfortunately for HBO, GOT just ended, but there's still hope for sequels and spinoffs. Additionally, HBO also has a few new critically acclaimed series on the air right now, including Big Little Lies and the brand-new teen drama Euphoria.

HBO Max, however, will not only feature all of HBO's content, but also content from TNT and TBS, as well as all content from the Warner Brothers Studios' vast library. HBO may dilute its highbrow niche branding a bit as it gives viewers a more broad array of content, but the move is one that AT&T had to make in order to keep up with Netflix's massive all-in-one service and global scale.

And remember, Warner Bros Studios not only produces films but also lots of popular television shows, some of which have even aired on non-Time Warner networks... such as Friends.

That's right, Friends fans -- soon you won't be able to stream the love saga of Ross and Rachel on Netflix anymore, as HBO Max has decided to pony up the cash to take the series back for 2020 and beyond. This is somewhat of a big deal: Friends had been the second-most-viewed show on Netflix, according to Nielsen, only behind The Office, which is also being taken back by NBCUniversal for the upcoming Comcast (NASDAQ:CMCSA) streaming service.

Just because HBO owns Warner Bros., however, doesn't mean that it gets Friends for free. In what amounts to an intercompany payment, HBO will pay a whopping $425 million for the rights to Friends for the next five years from 2020-2024. That's actually a slightly higher rate than Netflix's $80 million payment for 2019.

Why can't WarnerMedia merely dictate what it can pay, since it owns the show? Because every show's producers, creators, and actors have residual rights attached to the show. If WarnerMedia were to purchase the show's rights for a long period at below-market rates, those creators could seek legal recourse. Losing a lawsuit would not only be potentially bad for WarnerMedia's bottom line but could also get in the way of attracting top talent to its networks.

Where does this leave Netflix?

AT&T looks like it may have finally gotten its act together with HBO Max, which seems as though it will have a significant amount of content for a very reasonable price point. Although Netflix is priced lower at just $12.99 per month, Warner Bros. Studios owns content going back decades, whereas Netflix only began investing in original content in 2013. Depending on what WarnerMedia decides to put on the platform, its content depth could even rival and/or surpass that of Netflix.

Should the departures of Netflix's two most popular shows worry investors? I would say yes and no. Netflix has grown into an incredibly beloved brand and has had its own share of original hits like Stranger Things, Ozark, Orange is the New Black (co-produced), and others. Netflix had also been paying a pretty penny for the rights to Friends and The Office, as well, so losing them will free up some cash to invest in more originals.

As we're coming to know, owning your own content is of utmost importance, especially since the big studios are wising up and launching their own streaming services. That's why Netflix has been spending so much money in recent years, sending its cash flow into the negative.

The future of streaming looks as though it will be a competition of four to five giant, all-in-one offerings for under $20 per month, meaning consumers could basically pay the equivalent of today's big cable bundle or mix and match as they see fit.

The stakes are incredibly high, however, as every large media company is vying to be the No. 1 or No. 2 "must-have" service on consumers' lists. As they say in the biz, stay tuned.