Please ensure Javascript is enabled for purposes of website accessibility
Log In Help Join The Motley Fool
Free Article Join Over 1 Million Premium Members And Get More In-Depth Stock Guidance and Research
By Billy Duberstein - Updated Jun 28, 2019 at 8:00AM

The company is trying a new approach to counteract cord-cutting in its media division.

AT&T's (T -0.14%) purchase of Time Warner was held up by regulatory review over fears of the combined entity holding too much market power. Yet one year after the merger closed, it looks as if AT&T is the one that could use some help.

While investors may have thought AT&T had a master plan for its Time Warner acquisition, you wouldn't know it from the company's actions over the past year. Management has been tweaking strategies amid middling results, but the company has yet to meaningfully arrest rampant cord-cutting and the rise of Netflix (NFLX 1.98%). In fact, the Wall Street Journal just reported that AT&T is looking to change plans for its upcoming streaming service ... again. 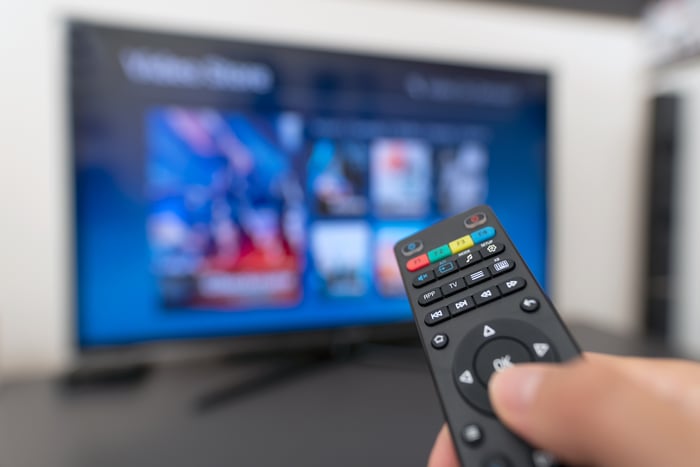 The new WarnerMedia streaming offering is likely to be much less complicated than the previous plan, which shows AT&T is warming up to some hard truths.

All the Time Warner you can get

The new streaming service would charge about $16 to $17 per month, putting it in the middle of a Netflix subscription ($12.99 per month) and a combination of Disney+ and Hulu (about $19 per month). The offering would include HBO, Cinemax, and Time Warner's vast content library in an enormous offering that would rival just about every content company operating today. John Stankey, who took over responsibility for WarnerMedia back in 2017, is pushing this new offering though it won't be unveiled until next year.

Stankey had initially sought to provide a three-tiered system -- one for movies, another for original programming and blockbusters, and a third for Warner Bros. content. However, according to analyst Craig Moffett of Moffett-Nathanson, that's expected to change into the single unified service. AT&T telegraphed this decision earlier this year when the company restructured its media wing to further integrate Warner Bros., Turner, and HBO into a unified business unit.

Can't have your cake and eat it too

There's likely a reason WarnerMedia initially sought a tiered system -- it has a lot of diverse content. Therefore, a single, all-encompassing offering wouldn't be able to maximize profits via segmentation as a tiered system would.

However, it's highly unlikely a modern consumer would be open to -- or even have the attention span to consider -- three different Warner streaming options, especially in a post-Netflix world. AT&T is learning this lesson as well with its DIRECTV Now product, its streaming over-the-top offering that mimics a pay TV package. According to its website, DIRECTV Now offers a whopping seven different packages, all tailored to different customer segments. DIRECTV Now recently had to drop certain content due to a recent decision to include HBO in all tiers, shifting its offerings around just a year after launch.

For all of the choices and content shuffling, DIRECTV Now still shed some 14% of its subscribers last quarter, as early promotions rolled off.

Distributors may not be happy

There may also be some consequences to going with a single, affordable, and comprehensive option -- cable partners also offer HBO as a stand-alone service for as much as $14.99 (the cost of HBO NOW). They likely won't be too pleased with WarnerMedia's new competitive offering.

While cable and satellite distributors have been affected by cord-cutting, they still generate lots of business for WarnerMedia content, so WarnerMedia can't afford to upset them. A deal may include distributors actually getting a cut of revenue from the WarnerMedia service, or they may be allowed to lower the price of HBO per their contracts, according to the Wall Street Journal.

Would this even work?

It's difficult to see WarnerMedia as anything but a choice AT&T seemingly had to make, rather than one it wants to make. Nevertheless, it's the proper thing to do in the new media environment. The question is if the new streaming offering can possibly be as profitable as the old system, when HBO, Turner, and Warner Bros. content was all sold separately via cable distributors.

Yet it's no sure thing the new streaming plan will succeed -- after all, AT&T has made mistakes incorporating big acquisitions in the recent past. The company appeared to admit error just recently regarding another enormous acquisition: its 2015 purchase of satellite cable company DirectTV. Recent reports say AT&T is now looking to merge the DirectTV satellite TV unit with Dish Network, perhaps an admission that satellite technology is at a competitive disadvantage in the age of cord-cutting.

Therefore, while the new Netflix-like service from WarnerMedia is the way to go, it doesn't mean it will win over consumers, especially when it has to face off against lots of streaming competitors. AT&T still needs to prove itself to be declared a big player in streaming.