After debuting on the Nasdaq with an IPO price of $29 per share, digital fitness company Peloton (NASDAQ:PTON) took some steps backward, closing 11.2% down after its first day of trading. The stock has continued to drop, now down 22% as of this writing, which is likely to give even the company's biggest bulls some pause.

Not surprisingly, CFO Jill Woodworth told MarketWatch that the company wished it had done better on its debut day, "but we're in it for the long haul and are excited for capital to continue to grow our business." 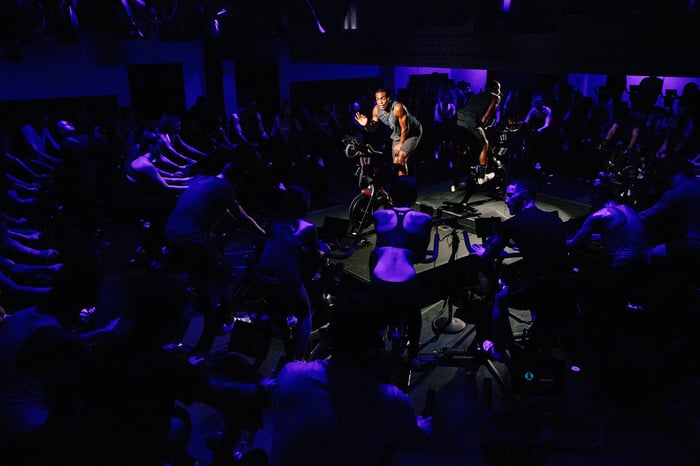 Woodworth said she believes a continued expansion in the international market, as well as new products, should help push Peloton forward. But should investors heed early warning signs in Peloton that look a lot like Fitbit, or is there a path to differentiation?

Peloton experienced quite the rise in popularity leading up to its IPO. According to its IPO filings, the company reported revenue of $915 million at the end of fiscal year 2019, up 110% from the prior year.

While Peloton's losses increased substantially in that time as well -- from $48 million in 2018 to $246 million this year -- that could be attributed to its investment in growth.

What attracted the attention of investors was the fact that Peloton doesn't just sell fitness equipment -- it has a growing, loyal customer base that pays a recurring monthly subscription. In the prospectus, the company said more than 55 million workouts were completed on a Peloton device in fiscal year 2019 by more than 1.4 million total members. There are currently 511,202 subscribers who pay $39 each month to access on-demand and live-streamed workouts. Total subscription revenue was $181 million this latest fiscal year, representing year-over-year growth of 126%.

In the U.S., Peloton's largest market, the focus on healthy living is growing every year. In 2018, upward of 71.5 million people in the U.S. utilized health clubs, according to a study by the International Health, Racquet & Sportsclub Association. The study also found roughly one in five Americans belong to at least one health club or studio. Membership at paid gyms has increased 37% since 2008, and the total number of people who attend fitness clubs has gone up by 34%.

Peloton is banking on this growing demand for fitness services and products, combined with the rise in popularity of at-home activities, to fuel its future growth.

Peloton's detractors point to two main issues with the company's long-term outlook: its expensive equipment and the struggles of similar companies in recent years.

Peloton believes it has a total potential market of roughly 67 million households with a target market of households that earn $50,000 and more.

The question, of course, is how realistic that target market is. Keep in mind Peloton bikes start at $2,245, and treadmills begin at $4,295. On top of that, people have to pay the $39 monthly subscription fee to have full access to the workouts. If they don't, they basically only have a traditional piece of stationary at-home workout equipment.

Is this really a product for households that earn $50,000, or is it a product geared toward higher-income consumers?

Besides that, Peloton will have to deal with some investors who are wary of another tech fitness company claiming the potential to change the way people do certain activities. That was the message from Fitbit, and it hasn't worked out so well for initial investors in the company. After pricing at $20 in June 2015, Fitbit plummeted and is now trading below $4 per share.

How should investors view Peloton?

The play with Peloton is the subscription model being successful long term. Much like other tech companies with subscription-based business models, Peloton is hoping that recurring, high-margin revenue can sustain it for many years to come. And with an increasing population focused on fitness and health, especially in the U.S., the company seems to have a market it can thrive in.

One thing Peloton has going for it is that unlike Fitbit, it wouldn't be as easy for a competitor to come in and offer a lower-priced option. Fitbit had to deal with bargain-hunting competitors as well as with huge companies such as Apple and Samsung that have products that do more than just count steps.

At the same time, investors have to be concerned with Peloton's initial performance following its market debut. It's possible Peloton could have a much smaller potential market than hoped, simply because its offerings are expensive. People also have an easily accessible alternative of paying a similar monthly subscription fee for full access to a local gym or health studio.

For now, it would be wise for investors to hold off on buying into Peloton. Initial market impressions have been far from encouraging, and management still needs to prove that it can deliver a healthy, profitable business over the long term.