Honda Motor Company (NYSE:HMC) said that its U.S. sales fell 14.1% in September, as a calendar quirk -- and a letdown after a huge sales gain in August -- made for a difficult year-over-year comparison.

Despite the letdown, Honda's strong August result was enough to give it a 2.4% sales gain for the quarter -- a good result compared to its five largest-selling peers:

Year to date through September, Honda's U.S. sales are roughly flat, down just 0.1% from the same period in 2018.

After Honda's best sales month ever, a letdown

Honda had an absolute blowout month in the U.S. in August, selling almost 174,000 vehicles (up 17.6% from the year-ago month) for its best-ever monthly result in the United States. That would be a hard act to follow under any circumstance, as it's likely that the company "pulled forward" sales from later in the year with aggressive marketing and incentives. Given that September had two fewer "selling days" than September of 2018, it was easy to predict that Honda would see a letdown. ("Selling days" exclude Sundays and holidays, when auto dealerships are traditionally closed.) 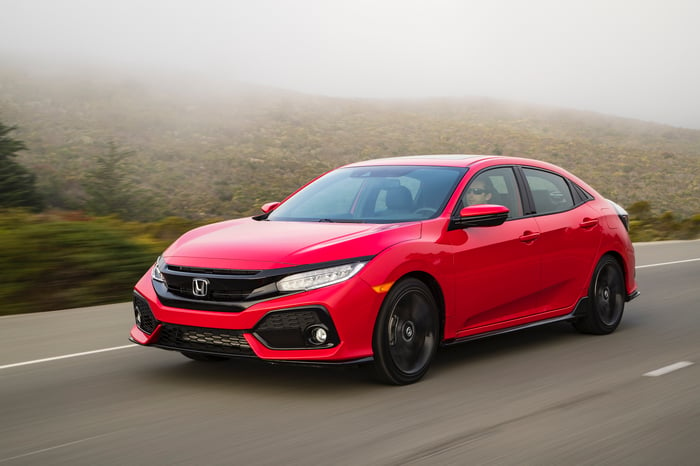 Honda Civic sales jumped almost 26% in August, but the model -- and most of Honda's other mainstays -- slumped in September. Image source: Honda.

While there were a few bright spots, most of Honda's mainstays were down year over year:

For auto investors looking ahead to Honda's quarterly earnings report next month, its U.S. results are kind of a mixed bag. On the one hand, sales were up for the quarter -- but on the other, that gain was driven by a blowout August in which Honda's incentives were up 16% from a year ago, according to figures from ALG (a division of TrueCar).

All of that will probably add up to a sales gain in North America for the quarter, but those incentives likely squeezed Honda's margin in the region, meaning that operating profit might well decline from a year ago despite the strong sales. We'll find out when Honda reports earnings next month.