The two leading regional amusement park operators reportedly came close to hooking up this week. Let's break down why it didn't happen.

It was a wild week for investors in the amusement park industry. Cedar Fair (FUN -0.25%) moved higher on Wednesday after a Reuters report claiming that Six Flags Entertainment (SIX -0.21%) was offering a cash and stock deal to acquire the smaller regional amusement park chain. The gains were swiftly surrendered on Friday, after Reuters followed up to report that Cedar Fair had rebuffed the offer allegedly valued at $4 billion.

Consolidation in a fragmented industry makes sense, and it's easy to see why Six Flags would want the Cedar Fair collection of parks. It's also easy to see why Cedar Fair refused those advances, according to Reuters' sources. Let's go over the reasons the perfect pairing on paper apparently failed in application. 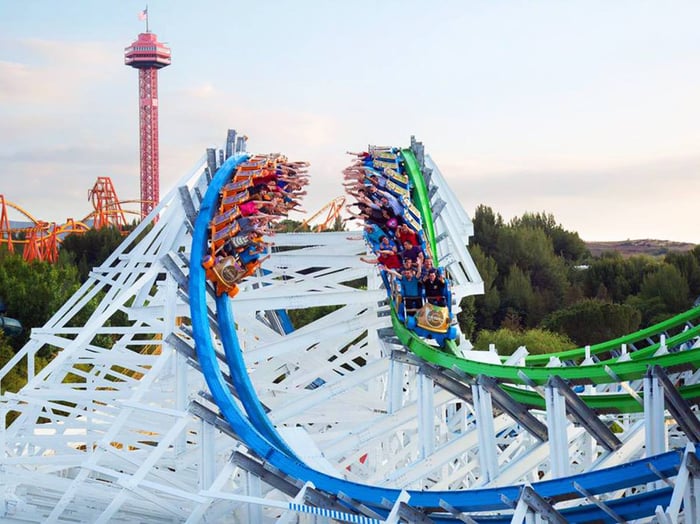 1. Cedar Fair didn't want to give up its tax breaks

Cedar Fair is set up as a master limited partnership, passing through the lion's share of its earnings to investors in the form of tax-advantaged distributions. Cedar Fair reportedly thought it wasn't being compensated appropriately for giving up that status. Cedar Fair trades in units, not shares.

There is a nugget of truth here. Cedar Fair itself is spared the burden of federal taxes by passing on its profits to its stakeholders, but obviously this is not a deal-breaker. Cedar Fair was simply trying to negotiate a better price, something that Cedar Fair investors should be grateful for and Six Flags' board should've been prepared to see happen.

2. The all-stock deal would depreciate in value

The deal initially valuing Cedar Fair at $70 per unit was reportedly part-cash but mostly stock. Stock deals can be problematic for acquisitions that take time to close, and this deal certainly would have to clear antitrust hurdles.

Shares of Six Flags would likely sink following the buyout, and surely enough we did see the stock dip on Wednesday after the initial acquisition report surfaced. Six Flags stock would go on to rise on Friday after the offer was reportedly rebuffed.

A combination of Six Flags and Cedar Fair would result in some compelling cost-saving synergies, but it would've weighed on the value of the acquirer's stock as currency. The antitrust issues wouldn't be too problematic. There is minimal overlap between the geographical reach of the two players. However, it's easy to see why Cedar Fair didn't want to be tethered to a potentially weak Six Flags in the months it would take for the deal to close.

3. Time is on Cedar Fair's Side

It's easy to see why Cedar Fair would make a move now, as most of the the Six Flags and Cedar Fair parks wind down their operations outside of Halloween-themed haunt events on weekends. The transition would be easier during the seasonal lull, and if Six Flags wanted to catch Cedar Fair at its most vulnerable -- with fears of a recession bubbling up ahead of next year's season for an industry that lives and dies by locals with money to spend -- why wouldn't it try now?

The problem here is that time and history are on Cedar Fair's side. It may be little more than a fluke, but Cedar Fair units have moved higher during the first quarter in nine of the past 10 years. Most of the three-month gains have been double-digit pops, including a 13% surge earlier this year. There are no guarantees that Cedar Fair will move higher in the next quarter, but that has happened 90% of the time. Despite having most of it attractions closed ruing the first quarter, investors tend to warm up to Cedar Fair ahead of scream machines firing up as the weather heats up in the springtime. If Cedar Fair thinks its units will be trading higher come early next year there's no point in giving in now.

Cedar Fair is also coming off of another strong quarter, setting fresh 52-week highs last week before any of the buyout activity. It would take a really juicy premium to convince Cedar Fair to bow out now, and Six Flags doesn't have that kind of ammo in its leveraged state.