News of the product launch sent Snap shares tumbling. Investors remember what happened to Snap after Instagram rolled out its Stories product and it expanded to Facebook's (NASDAQ:FB) other apps. User growth slowed and eventually stalled. Instagram copying yet another core feature of Snapchat could have similar effects.

But the move isn't nearly as big of a deal for Facebook. It's just another experiment with great potential. 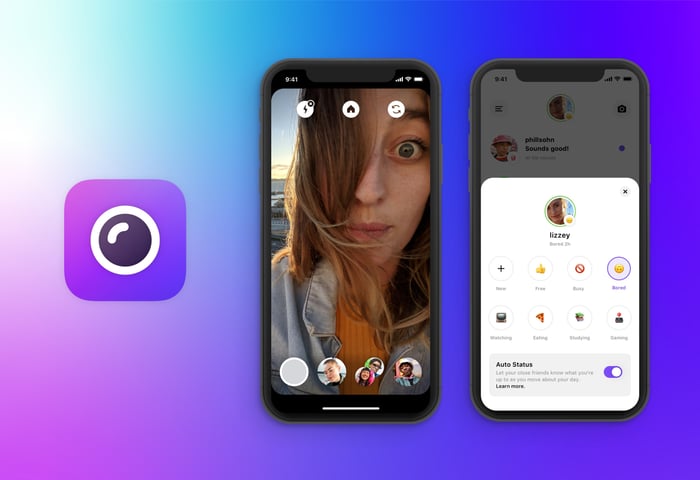 We've seen this before

This isn't the first time Facebook has tried to copy Snapchat's features. Practically everyone is familiar with Instagram's success with the Stories format, which it unabashedly stole from Snapchat. But Instagram and Facebook had several other Snapchat-like experiments, as well. Here's an incomplete timeline.

Threads is just the latest attempt from Instagram to take on Snapchat and try to capture the same highly engaged user base. As you may have noticed, most of Facebook's and Instagram's attempts to compete failed to attract an audience significant enough to justify continued support of a stand-alone app.

That's quite alright with Facebook. Stand-alone apps can help inform Facebook regarding which features work well. The company can then integrate them into its most popular apps, which makes its apps even more compelling for users.

Threads is a moonshot. If it succeeds, it could be a significant source of engagement and ad inventory for Facebook. In the more likely case that it doesn't succeed, Facebook doesn't have to spend very much to build and maintain it. Plus, it can take the parts that do work -- maybe people really like the automated status updates -- and integrate them into its already-popular apps -- think automated statuses in Messenger and WhatsApp.

Why it's a big deal for Snap

The big story for Snap investors is that Facebook is going to continue to throw its weight around and make attempts to usurp Snapchat. The tech giant has a lot of cash and a massive user base it can leverage to launch new products. As such, Snap needs to be vigilant in creating unique assets and establishing a differentiated service.

In the company's S-1 filing, management wrote, "In a world where anyone can distribute products instantly and provide them for free, the best way to compete is by innovating to create the most engaging products." Those words certainly apply more to Snap than to Facebook, which has shown it can successfully copy products from competitors (instead of innovating) and have more success than the original platforms. It takes a lot more work for Snap to succeed.

Snap is making progress in differentiating its product, particularly through media. It launched a games platform earlier this year and is investing lots of money in original content for its Discover platform.

That said, the core functionality of Snapchat will always be under threat from Facebook, and Threads is yet another reminder of the fragile position of the company. Threads might not work, but if it does, Snap will bear the brunt of its success.