But not TD Ameritrade. UBS says you need to stay away from that one.

Last week was a lousy one to own stock in online discount brokerages. 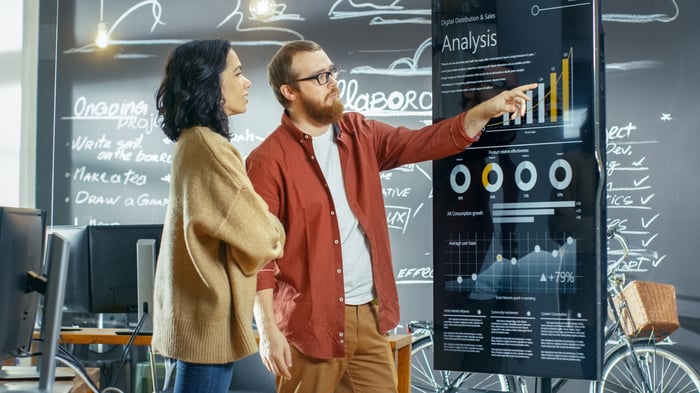 And yet, as 19th century British nobleman Baron Rothschild said, sometimes, the best time to buy is "when there's blood in the streets." Now that investors have had a weekend to lick their wounds, investment banker UBS is urging them to return to the market...and buy shares of E*Trade Financial.

Upgrading E*Trade to buy with a $41 price target, UBS makes the argument that although E*Trade's "earnings power has clearly been diminished by the price cuts, ETFC's customer value proposition has improved relative to peers," reports StreetInsider.com.

E*Trade boasts "a leading corporate services offering and active trader platform," the analyst says. Combined with the company's quick move to match Schwab's prices, this should help E*Trade to retain market share. In contrast, rival TD Ameritrade is entering this uncertain environment lacking a permanent CEO. Not only could this hinder the company's ability to move nimbly to compete with its rivals, but TD Ameritrade's "lack of leadership with a tenure that will stretch beyond a few months means current leadership does not need to deal with negative repercussions of today's decisions" -- and may make choices that turn out to be irrational in the long term, hindering future growth.

Accordingly, at the same time as UBS upgrades E*Trade, it is downgrading TD Ameritrade to neutral, with a $33 price target.

So competitive positioning is one reason to prefer E*Trade over TD Ameritrade. But it's not the only one. You see, while all three of the major publicly traded discount brokers have now foresworn revenue from trading commissions, it turns out that this is a bigger deal for some than for others.

As The Wall Street Journal recently reported, "By the time Schwab nixed trading fees, it had already whittled its revenue from commissions to just 7% of its overall business." Thus, Schwab will take a smaller financial hit from this move than will TD Ameritrade, for which commissions provide 15% of revenue. E*Trade, meanwhile, is somewhere in the middle (11%).

This, in UBS' opinion, doesn't make a lot of sense given "the fact that the difference between firms' earnings mix in the industry is converging" as everyone abandons trading commission revenue. With E*Trade less risky than TD Ameritrade, therefore, but priced similarly, the analyst concludes that "ETFC offers the most compelling path to value creation among the discount brokers."

Priced at 9.2 times trailing earnings, E*Trade stock looks clearly undervalued based on consensus analyst estimates that the company will not only survive this commission-fee mess, but go on to grow its earnings at better than 13% annually over the next five years. That's a whole lot better than the 5.5% growth rate predicted for TD Ameritrade, according to S&P Global Market Intelligence data, and it's faster than the 10% growth Wall Street projects for Charles Schwab as well.

On top of all that, E*Trade generates significantly better free cash flow ($1.3 billion over the last 12 months) than it reports as net income ($1.1 billion), with the result being the stock's price-to-free-cash-flow ratio is only 6.7 after last week's sell-off.

On a 13%-ish growth rate, that makes E*Trade stock a bargain -- and UBS is right to recommend it.