Shares of Dow Inc. (NYSE:DOW) rose 11.8% in September, according to data provided by S&P Global Market Intelligence, as investors continue to grapple with the overall health of the global economy and what it means for chemical companies like Dow.

Shares of Dow have been tracking sentiment concerning the ongoing trade dispute between the U.S. and China and fears that the global economy will slow. August was a lousy month for the stock, pressured by a series of analyst downgrades. These were due to worries about demand for the company's ethylene, siloxanes, and urethane products, which go into coatings, paints, solvents, lubricants, packaging, and specialty polymers. The stock recovered most of what it lost in August in the first few weeks of September, coinciding with a more optimistic macro outlook. Early September brought a reversal of the inverted yield curve that had caused recession concerns in August, along with news that the U.S. and China would soon resume high-level trade talks.

Dow's a tough stock to read right now. The company, a combination of materials-sciences businesses from the legacy Dow and DuPont empires, has only been out on its own since March. Dow came out of the split with a more complete set of assets and a streamlined cost structure, but highly tied to the economic cycle. 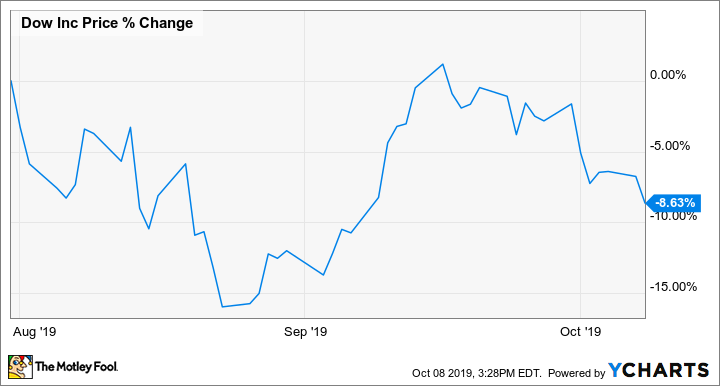 DOW shareholders have been on a roller coaster since the beginning of August. Data by YCharts.

The company's shares have given up much of their September gains in the opening weeks of October, and investors should expect more volatility in the months to come. The underlying business is strong, and the company offers a 6% forward dividend yield for those who are willing to wait out the cycle. Just understand that it could be a fairly long wait.