Rising oil prices and optimism about the global economy have investors piling back into the offshore market today.

Several catalysts are likely fueling today's big jump, including higher oil prices and two pieces of news that have investors optimistic about the global economy.

On the oil price front, crude oil prices are surging today. West Texas Intermediate crude, a key U.S. benchmark, is up 1.6% at this writing, while Brent, the most important global benchmark for crude oil, is up 1.9%. 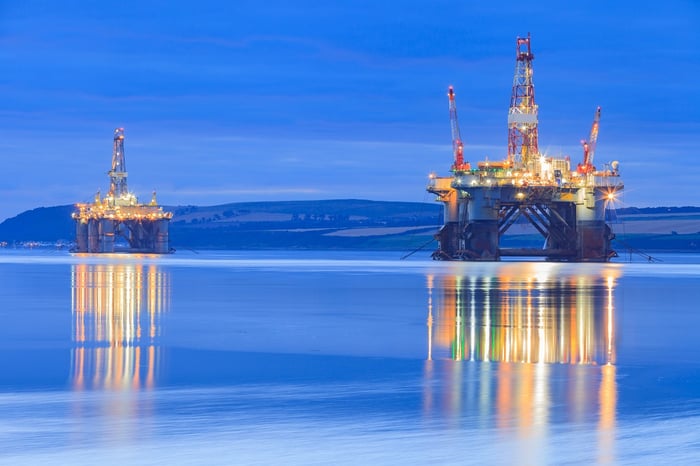 The biggest driver behind higher oil prices today is last night's report that an Iranian oil tanker had been attacked off the coast of Saudi Arabia, stoking fears that escalating tensions between two of the world's biggest oil producers could lead to further interruptions in global oil supplies.

While that's a case of "bad news is good news" for oil prices, there's some true optimism that has the entire stock market rallying today. At this writing, the S&P 500 is up 1.4% on two pieces of economic news that have big implications for the global economy.

First, U.S. President Donald Trump is set to meet with a top Chinese official today, sending an optimistic message that the ongoing trade war between the two global economic powers could be -- finally -- moving toward a conclusion. The two countries have spent much of the past year firing salvos back and forth in the form of saber-rattling threats and tariffs that have affected hundreds of billions of dollars in goods going both ways. The material harm to both countries, along with the uncertainty that's affected trading partners of both, has threatened to drag the global economy into recession.

Additionally, British and European Union officials are kicking up their negotiations on "Brexit," looking to reach an agreement before next week's scheduled meeting between EU leaders. Much like the U.S.-China trade war, a so-called no-deal Brexit has cast a cloud of uncertainty over all of Europe's economy over the past year. And with an Oct. 31 deadline fast approaching, investors are hopeful that intensified negotiations will lead to a deal.

You'll note that there's nothing above that directly points to offshore oil stocks. That might be frustrating, but it's not that uncommon for some piece of news to send oil prices higher and for offshore oil stocks to surge as a result. It's also not that uncommon to see the opposite -- oil prices fall -- and for offshore drilling stocks to drop as a result.

This is one of the biggest challenges with investing in the energy sector. Commodity prices can move quickly, and that can move oil stock prices, even if there's not a direct connection between the thing that caused prices to move and the stocks that were affected.

And I think that's the case today, at least in a sustainable way. Today's surging oil prices -- directly -- don't really affect offshore drilling companies. Sure, if oil prices continue to climb and remain higher in a sustained way, that's a positive for the sector, since it would support increased development of offshore resources.

And while there's strong evidence that's already happening, the things that are driving oil prices higher today aren't necessarily sustainable. Optimism that trade relations between the U.S. and China and between Britain and the EU are moving toward improvement is nice. But it's very speculative at this point and not something that I'd base an investment thesis on.

In other words, all it takes is rumors that a no-deal Brexit is imminent or a Tweet from Trump undercutting any progress on China trade talks, and you'll see today's gains evaporate.

So before you make any move on these offshore oil stocks, prepare yourself for a lot of volatility, and be ready to buy and hold for at least a few years while the offshore market continues to strengthen. If you're not comfortable seeing stocks you own gain -- and lose -- double digits in a single day or do absolutely nothing, you may want to just avoid the sector altogether.