Shares of Antero Resources (AR 0.31%), QEP Resources (QEP), and Centennial Resource Development (CDEV -5.92%) all experienced double-digit declines on Oct. 14 (though Antero recovered before close). Today's big sell-off looks to have been sparked by a sharp decline in crude-oil prices. Both West Texas Intermediate and Brent Crude futures are down 2.2% today.

Today's decline looks like traders are losing much of the optimism that had them sending oil prices -- and some oil stocks -- higher on Friday, following positive news about both ongoing China-U.S. trade talks and Britain's negotiations to exit the European Union ("Brexit") with a trade deal in place. 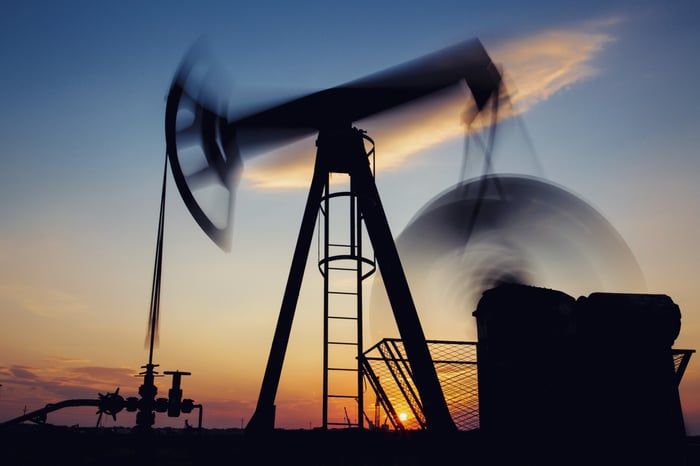 There is tremendous speculation right now surrounding the global economy, and energy investors continue to swing from optimism to worry over the prospects for many oil stocks. Either the China-U.S. talks or Brexit alone makes for big news; the combined uncertainty of these two trade deals is simply massive. And as things stand today, if either one -- or heaven forbid, both -- were to fall short of a mutually acceptable trade agreement, the repercussions could include a further weakening of economic activity on a global basis.

How does a 2% move in oil prices send these small independent oil and gas producer stocks down by double digits? It all boils down to how oil prices translate to their bottom line, and today's 2% drop works out to about $1.23 less for every barrel of West Texas crude sold. Moreover, today's decline dropped Brent -- a major global benchmark for crude -- below $60 per barrel, after last Friday's rally moved it temporarily above that level.

The tug of oil prices is especially strong on QEP Resources and Centennial Resource Development. Centennial has spent much of 2019 trying to improve its returns and cash flow by cutting capital spending, and some of its hopes were tied to higher oil prices; with oil falling well below $60 per barrel, it will take even longer for the company to stop burning more cash than it generates. QEP may be in a state of limbo right now after having been close to a deal to go private over the summer, only for that deal to fall apart when the buyer reportedly lowered its offer.

For Antero, this morning's sell-off looks like it could have been a case of mistaken identity, since the company's primary focus is natural gas, not crude oil. That could at least partly explain why, after falling by double digits in early trading, Antero Resources stock rebounded and finished the day up 2.2%.

That's not to say its outlook is particularly rosy. On the contrary, the past couple of years, natural gas producers have struggled under a massive glut of gas that's not likely to go away anytime soon. For Antero, this has led it to continue producing gas at a loss, simply to have enough for the pipeline capacity it has already contracted.

Add it all up, and frankly, investors would do well to avoid all three of these companies for now. The oil market is being driven by even more speculation than normal, and small oil producers will live and die on the margins of oil prices that they can't control. And for Antero, even with a decent business and good operations, the natural gas market is probably in even worse shape than oil, with no end in sight that would push prices up in a sustained way.