Roku (NASDAQ:ROKU) recently announced it was offering lower-cost sound equipment through its partnership with Walmart (NYSE:WMT) under the retailer's in-house onn brand. The onn Roku smart soundbar and wireless subwoofer are priced at $129 each, a substantial discount to the $180 Roku-branded components it launched two months ago.

The lower price is a function of the Walmart-branded items having slightly less power than the ones Roku sells, as well as a more basic infrared remote. And though Roku generates most of its revenue and profits from its ad-supported platform business, the tech company's expansion into hardware beyond its streaming-video boxes gives it the chance to pad its bottom line. 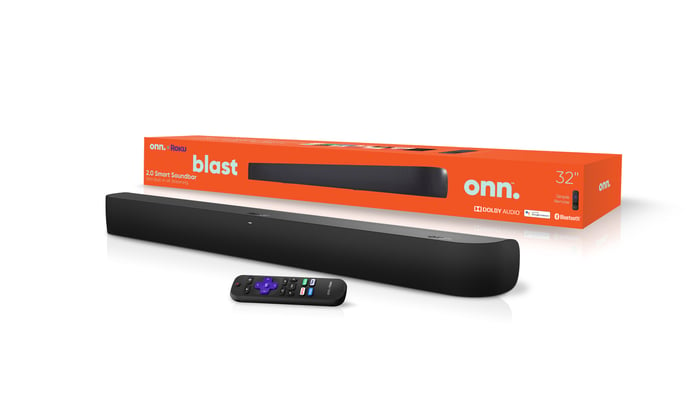 The Roku soundbar, as sold by Walmart. Image source: Roku and Walmart.

The Walmart partnership allows Roku to expand its customer base by giving the retailer's customers an entry point to better-quality sound components.

The onn Roku soundbar provides better sound for any television, but if users have a 4K TV with Roku built in, they have immediate access to Roku's programming, too.

Roku has established its leadership in connected TV, with about one out of every three smart TVs sold in the U.S. made by Roku. An analyst at Macquarie upgraded the stock to outperform on the basis of the foothold it has in connected TVs easily spreading internationally.

The more people who access Roku programming and the Roku Channel, the more advertising it can sell, and the greater its profits will be. It's begun offering pop-up advertising now, almost an ad-within-an-ad feature. That could lead to some backlash if it overdoes it, but within moderation it can increase its margins.

All paths lead to the platform

Platform revenue through the first six months of fiscal 2019 totaled $302 million, an 83% increase over the year-ago period, while gross profit was 74% higher and accounted for 95% of the company total.

Roku's new onn sound equipment gives it the chance to bulk that up. A soundbar is almost becoming a must-have because the flatter TVs get, the more difficult it is to get quality sound out of them. The soundbar immediately enhances the TV's audio while a subwoofer gives the listener more bass, that low thumping you can feel in your chest when you increase the volume.

That was the purpose of Roku's branded soundbar and subwoofer. By pairing them with Roku's wireless speakers, users can get a complete, relatively affordable surround-sound system. By partnering with Walmart, the retailer's price-sensitive customers can experience Roku programming the way it was meant to be heard. And since Roku is the biggest producer of streaming video players, many of Walmart's customers in the market for sound equipment have one of its players.

Buyers of the Walmart system are also not likely to mind or even notice the slightly lower power output, unless they're cranking the volume all the way up. The Roku-branded soundbar offers 60 watts of peak power while the onn-branded one has 40 watts. Similarly, Roku's subwoofer has 250 watts, versus 150 watts for the onn version. At regular room volumes, there might not be any noticeable difference.

Roku is making money at every stage of the streaming process. While it basically gives away its video players -- gross margins were just 5.5% in the second quarter of 2019 -- TV manufacturers that license its operating system pay Roku for it, and it gets paid for selling other streamers' content through its platform. Advertisers are willing to pay to get in front of its viewers, and by selling even more-affordable sound equipment through Walmart, Roku can help bring those eyeballs to its platform.

The tech specialist's stock was recently knocked back over fears of competition, but it's been climbing higher again as those worries may have been overblown. Being able to get its sound equipment to more consumers through an important channel like Walmart suggests Roku could again be thumping the market with profit-generating growth very soon.