Please ensure Javascript is enabled for purposes of website accessibility
Log In Help Join The Motley Fool
Free Article Join Over 1 Million Premium Members And Get More In-Depth Stock Guidance and Research
By Scott Levine - Oct 15, 2019 at 7:45AM

It's easy to feel buried under the copious facts and figures in quarterly earnings. Here are three good places to start.

Yamana Gold (AUY -0.20%), an intermediate-size gold and silver producer, is expected to report its third-quarter results on Oct. 25. It provided mixed results in the second quarter, beating analysts' sales estimate but narrowly missing on the bottom line.

Yamana reported earning per share $0.01 lower than what analysts were expecting. In the third quarter, analysts expect the Canadian-based miner to report $368 million on the top line and EPS of $0.02.

Sales and earnings figures are important metrics, but they are hardly the only insights into the company's quarterly performance. Here are three things investors should be mindful of when examining Yamana's Q3 earnings. 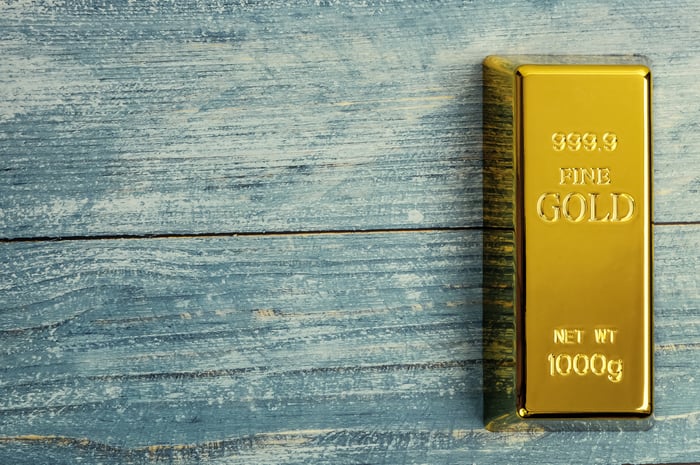 In the second quarter, Yamana reported production of 16,293 gold equivalent ounces (GEO) at Minera Florida in central Chile. Representing a 2.5% year-over-year decrease, the lackluster production surprised investors who were led to believe, based on management's guidance from Q1, that production would increase at the asset. The company attributed the performance to "reduced productivity" as it negotiated new collective bargaining agreements with unions.

With these negotiations now complete, investors should expect to see a rise in production since management said on the second-quarter conference call that Minera Florida remains on track to achieve 2019 mineral production guidance. Consequently, investors should look for the mine to report GEO production of about 25,000 ounces.

Similarly, investors should look for gold production to increase at El Penon, the company's other asset in Chile. Whereas it reported lower gold production through the first half of 2019 versus the same period in 2018, management credits this with its processing of the stockpile, which resulted in an average feed grade of 3.66 grams per metric ton for the first half of 2019. In the third quarter, however, the gold grade is expected to be higher because the reserve, not the stockpile, is being accessed.

In line with management's expectations, Yamana has reported strong free cash flow generation over the past two quarters. Through the first half of 2019, the company has generated net free cash flow of $115.4 million -- a 90% increase over the same period in 2018. And management doesn't see things slowing down in the third quarter. In a recent investor presentation, for example, management stated "cash flows are expected to increase further with a pronounced step change having already commenced." Though it didn't make specific reference to Chapada, a recently sold asset in Brazil, management had acknowledged elsewhere that the stockpiling costs associated with Chapada would no longer be a factor, which would hurt free cash flow generation.

Investors should be eager to confirm that the company continues to generate strong cash flow as management has pegged it as an important factor in helping the company to shore up its balance sheet and reducing its net debt-to-EBITDA ratio from 1.5, where it stands now, to the target ratio of 1 by the end of 2021.

Since the beginning of the year, management has maintained a 2019 forecast for all-in sustaining costs (AISC) per gold ounce of $920 to $960. But savvy investors may be wondering how the disappearance of Chapada from the portfolio will affect the company's AISC due to the low-cost nature of the asset. In 2018, for example, Yamana reported AISC of $931 per GEO, while Chapada reported AISC of $473 -- the highest margin among all of the company's assets. Management had expected a similar feat in 2019, with Chapada predicted to report AISC of $525, the lowest of all the company's assets.

Addressing the disposition of Chapada on the Q2 conference call, management refrained from revising the AISC forecast for 2019, though it acknowledged that the company may see AISC rise about $30 per GEO. Through the first half of 2019, Yamana has reported AISC of $936, so even if the company reports a number exceeding the upper limit of the annual guidance, it may still land between the $920 to $960 forecast for the year.

What to focus on when Yamana reports

While I'm curious to see how Minera Florida and El Penon performed in the third quarter and how the sale of Chapada will affect the company's cost profile, I'm more interested in the cash flow statement. Management has repeatedly expressed confidence that it's poised for strong cash flow generation, and we should see this in the third quarter. Its absence could portend trouble with the company's ability to deleverage, a much-touted facet of its near-term plan.