Oil prices have been volatile this year: up in April, down in June, down further in July, back up again in September. Natural gas prices have been bouncing around, too. That can make it tough to figure out whether energy stocks are going to go up, down, or hold still.

Luckily, if you buy shares in the best companies, you'll generally outperform the rest of the industry, even when the market is volatile. Avoiding certain kinds of stocks that are most susceptible to price swings can help, too. With that in mind, this October, you'll want to seriously consider Enbridge (NYSE:ENB), Brookfield Renewable Partners (NYSE:BEP), and Royal Dutch Shell (NYSE:RDS.A)(NYSE:RDS.B). Here's why these companies look like good buys right now. 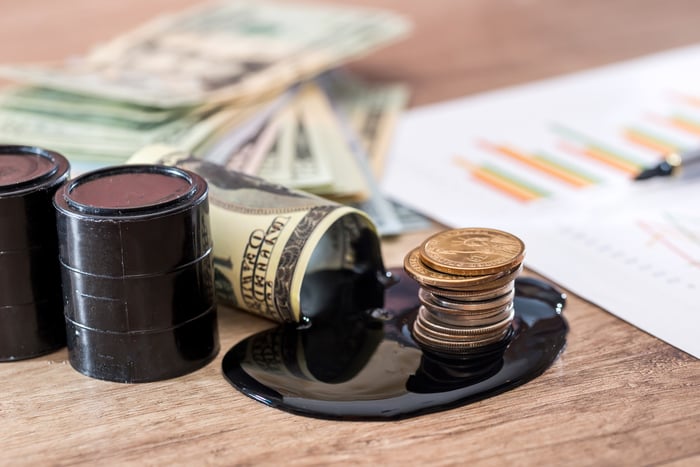 Cutting out the bad spots

If you have bruised fruit or vegetables in your kitchen, you're probably better off just cutting out a small soft spot rather than throwing the entire thing away. Likewise, when it comes to an industry like energy, volatility in one subsector doesn't mean you need to avoid the industry altogether.

When oil and gas prices fall, the first companies that tend to get hit are exploration and production companies (E&Ps), because they won't be able to make as much money from the petroleum they're extracting. Oilfield services companies can also be affected, because E&Ps that aren't making as much money have less to spend on the support services they offer. That's why you might want to consider an energy company that's involved in pretty much all the other sectors of the energy industry except those. And I've got one in mind: Canadian energy giant Enbridge.

Enbridge is one of the largest energy companies in North America. Its biggest business is pipelines, transporting natural gas and crude oil through its network. Because that's primarily a fee-based endeavor, Enbridge makes money whether oil and gas prices are high or low. It also owns wind and solar farms, which certainly aren't affected by petroleum prices, and even operates a natural gas utility.

Over the past year, Enbridge's shares have held up despite a downtrend in oil and gas prices: 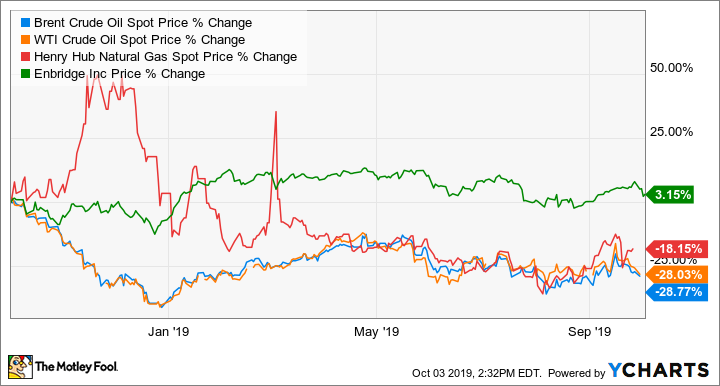 Another good reason to pick up shares is the sweet 6.3% dividend yield. Plus, the company has big growth plans. Diversification is good, and in this case, the right kind of diversification is even better.

Many renewable energy stocks have foundered in recent years. Falling prices have hurt solar panel manufacturers, and hydrogen fuel cells still can't seem to get off the ground. But there are some good options for those interested in renewable energy.

One such option is master limited partnership (MLP) Brookfield Renewable Partners. MLPs are only allowed to operate in particular sectors, like energy infrastructure. In return for favorable tax treatment, they are required to pay out most of their cash flow as distributions to their unitholders. Because of that, they tend to have high distribution yields. Brookfield is no exception, currently offering a 4.9% yield.

That yield is actually near a five-year low for Brookfield, which at the beginning of the year was paying about 7.5%. What happened? Its unit price has appreciated 34.3% so far in 2019, thanks to the company's strong fundamentals and growth projections. Brookfield's management believes it can grow its cash flow -- which, remember, is mostly paid out to unitholders -- by up to 16% over the next five years. That's on par with the partnership's returns in past years, and represents solid growth. Given how volatile the oil and gas markets have been lately, the prospect of solid, steady growth seems especially appealing right now in the energy space, which is why Brookfield looks like a buy this month.

If you really want to invest in oil and gas right now, you may want to consider looking at the oil majors. Because they have refining and marketing arms to go along with their exploration and production arms, they often outperform their smaller E&P cousins when oil prices drop. This was true during the oil price downturn of 2014-2017. And, judging by valuation metrics, the strongest pick among the oil majors right now is Royal Dutch Shell.

Shell's current dividend yield of 6.6% is the second-highest among the oil majors, only trailing BP's current 6.7% yield. Its price-to-earnings ratio, on the other hand, is just 11.5, the lowest of any of the oil majors (lower is better). By other metrics, like enterprise value to EBITDA, price to free cash flow, price to sales, and price to book value, Shell has either the best or second-best valuation in the business.

But the metric that shows how Shell really shines is its return on capital employed. This number is a measure of management strength, showing how effectively the company deploys its resources. Shell's 11.2% is easily the highest among its peers. That means we can expect its performance to continue to shine in the future.

Shell's Q2 2019 earnings disappointed Wall Street, which was expecting the same strong outperformance it had notched in the previous two quarters. That miss caused the stock price to drop, but the market seems to have overreacted, especially considering that the company still managed a double-digit year-over-year increase in cash flow. That makes October an excellent time to pick up shares of this reliable outperformer.

The energy landscape looks quite different now than it did just a year ago. Extra volatility in oil and gas prices may make you wary about buying in this month. But for investors who want to add some exposure to the energy sector, there are still good choices to be found, including Enbridge, Brookfield Renewable Partners, and Royal Dutch Shell.