Please ensure Javascript is enabled for purposes of website accessibility
Log In Help Join The Motley Fool
Free Article Join Over 1 Million Premium Members And Get More In-Depth Stock Guidance and Research
By Keith Speights - Oct 16, 2019 at 5:00AM

It's growing. It's profitable. It's beating expectations. The other big Canadian pot stocks aren't.

It's time to crown a new king among Canadian marijuana stocks. Sure, Canopy Growth (CGC 4.72%) claims the largest market cap and the biggest equity partner. Aurora Cannabis (ACB 7.75%) has the biggest production capacity. But based on its latest quarterly results, there's a solid argument to be made that the new king of cannabis is none other than Aphria (APHA).

Were Aphria's fiscal 2020 first-quarter results that good? They were. And the company's financial prowess is setting it apart from the rest of the top Canadian cannabis producers. 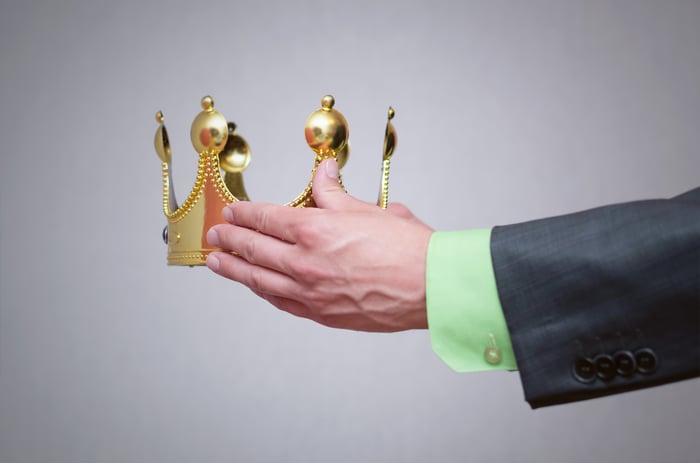 Aphria's Q1 results announced on Tuesday marked the company's second quarter in a row of solid profits. The company reported Q1 net income of 16.4 million Canadian dollars, or CA$0.07 per share, up from CA$15.8 million, or CA$0.05 per share, in the previous quarter.

Granted, Aphria's Q1 profit comes with an asterisk. The company benefited from nearly CA$17.9 million in net fair value adjustments for the sale of inventory and for the growth of biological assets. Without these adjustments, Aphria would have posted a small net loss. But a small net loss is a lot better than the results that Aurora and Canopy have delivered this year.

Both Aurora and Canopy Growth overpromised and underdelivered in their most recent quarterly updates. Aurora even failed to hit guidance that it had given just a few weeks before reporting its fiscal 2019 Q4 results. Aphria, though, didn't falter with its Q1 performance.

The consensus among analysts was that Aphria would report a loss of CA$0.02 per share. As we've already seen, the company handily beat that estimate. Even without the bump from the fair-value adjustments for the sale of inventory and growth of biological assets, Aphria would still have topped analysts' expectations.

Aphria, however, did fall a little short of analysts' revenue projection of CA$131 million, with the company recording revenue of CA$126.1 million. This revenue total was even lower than the revenue of CA$128.6 million reported in the previous quarter.

But Aphria gave a good reason for the lower revenue. It stated that distribution revenue for its CC Pharma operations was lower because of "a change in business strategy" resulting from Germany's changes to its reimbursement model for medical cannabis. Aphria's strategy change caused revenue to be lower for CC Pharma, but earnings were higher. That's a trade-off that analysts and investors don't mind.

Aphria's share price sank on Monday as investors appeared to worry about a big letdown with the company's Q1 results. There were certainly some reasons why worrying might have seemed warranted. HEXO (HEXO 5.87%) provided a preliminary look at its fiscal 2019 Q4 revenue last week and warned of potential trouble for the Canadian cannabis industry.

In particular, HEXO stated that "early signs of pricing pressure are being felt nationally" in the Canadian adult-use recreational marijuana market. Those were alarming words, considering that many have predicted that a supply glut would hit the Canadian cannabis market sooner or later.

However, Aphria completely defied HEXO's hex. Aphria's average selling price in the recreational market actually increased from CA$5.73 per gram in the previous quarter to CA$6.02 per gram in Q1. The company's net revenue from recreational cannabis sales rose from CA$18.5 million in the previous quarter to nearly CA$20 million in the first quarter.

Aphria delivered positive Q1 results despite a small fire at its Broken Coast facility negatively impacting revenue. This could mean that the company will enjoy a boost in the second quarter, though: Aphria said that "the majority of the lost quarterly revenue" of around CA$1.5 million will be made up in the next quarter.

Other Canadian cannabis producers could beat Aphria on revenue, but none of them will top it on adjusted EBITDA or on profits. With CC Pharma as its crown jewel, Aphria is now arguably the king of cannabis as investors in marijuana stocks look more closely at companies' bottom lines.