Shares of Gap (GPS 5.49%), an apparel, accessories, and personal care products retailer, were down about 5% in early Friday morning trading in response to a couple of industry developments.

The first development likely weighing on Gap shares is the recent downgrade from Credit Suisse, which moved Gap, among others, from neutral to underperform. Michael Binetti of Credit Suisse also lowered Gap's target price from $20 down to $14 per share, below its $17.57 closing price on Thursday. The downgrade was based on channel checks and commentary from other U.S. retailers that emphasize sluggish retail trends remained throughout the third quarter and Credit Suisse believes those negative trends are likely to remain through the fall and holiday season.

Another development likely weighing on the broader industry was a weaker-than-expected earnings report from a vertically integrated manufacturer of basic apparel, Gildan Activewear. Gildan's stock plunged more than 33% lower during Friday morning trading before recovering some of those losses. However, the company's profit warning, lowered guidance, and analyst downgrades likely added pessimism to many broader apparel and retail investors. 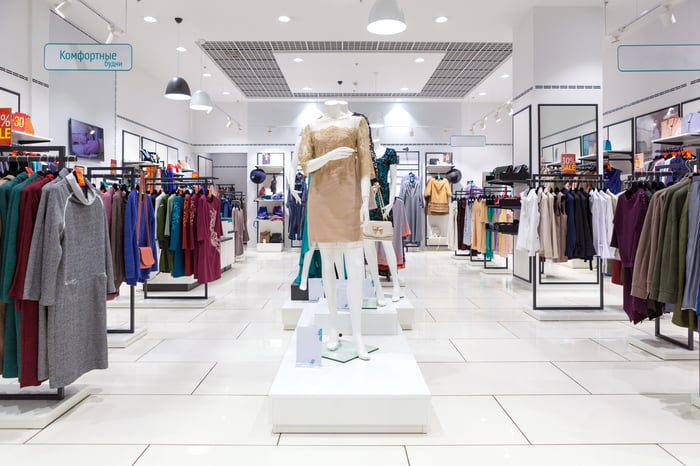 Friday's drop was simply the latest for Gap, which has shed almost 40% of its value over the past 12 months as many mall-based brick-and-mortar retailers continue to struggle against a wave of e-commerce competition and traffic declines -- and investors have opted to consider other consumer discretionary stocks. Now, investors will likely focus on what comes of a pending spinoff of Old Navy in 2020, which has been a bright spot in Gap's business with plans to open roughly 800 new stores. While some argue the spinoff could be good for Gap, it's also true Old Navy would be one less entity helping to offset the declines of its namesake business.