Please ensure Javascript is enabled for purposes of website accessibility
Log In Help Join The Motley Fool
Free Article Join Over 1 Million Premium Members And Get More In-Depth Stock Guidance and Research
By David Butler - Oct 22, 2019 at 6:50AM

While third-quarter results included some nice earnings, the streaming giant's overall direction is not encouraging.

Netflix (NFLX -1.52%) opened roughly 6% higher last Thursday after reporting a strong earnings beat in its third-quarter results. That bump has been followed by an 8.6% decline as investors worry about guidance. Overall, I'm still bearish: The tech giant's stock is overpriced, and guidance suggests a continued slowdown in membership growth. Competition should begin to erode its ability to get the same user gains as in the past.

Currently, the earnings do not justify the share price, and nothing in the third-quarter results eases investor concerns around cash flow, continued content expenses, and the rising competitive pressure.

The quarter was a mix of solid earnings and missed targets on membership growth:

Netflix missed its target on subscriptions. Guidance had called for 7 million additions to paid memberships. That would have been a 21.6% increase. Instead, it reported 6.77 million paid additions, for a 21.4% increase. The miss was narrow, but it was a marked decline from Q3 2018 membership growth of 25.4%. If Netflix is already experiencing a slowdown, what will happen once Disney (DIS -0.90%) and Apple (AAPL 0.03%) launch their streaming services next month? 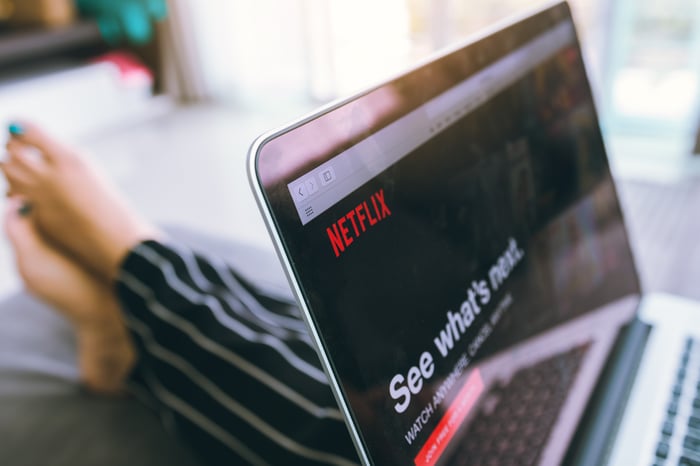 Competition and the CEO's commentary

I love that Netflix pressed the industry to put together higher quality content and made it more readily available to consumers. What I don't love is the lack of a significant barrier to entry. The chatter over the competition was sideswiped a bit by CEO Reed Hastings, who welcomed competitors, saying that they will increase cord-cutters and help his company. But that view seems flawed -- the increase in rivals is leading to a price war for content.

Disney seems like the biggest threat to Netflix. It has strong annual free cash flow and a content library that is slowly being withdrawn from Netflix. It controls both Hulu and the upcoming Disney+ streaming services. And as the content war heats up, Netflix will be forced to allocate more and more capital toward generating its own content (its 2019 budget for content creation is already $15 billion). Businesses with demonstrated track records of creating highly profitable content like Disney should succeed over a business that has relied on financing to achieve similar results.

Over the short term, most streaming services might actually experience tighter margins, mainly from the cost of content creation, coupled with the pricing war that has already begun. Disney+ is expected to cost $6.99 a month, while a package of Disney+, Hulu, and ESPN+ will cost $12.99 monthly. The pricing of the all-in package is in line with Netflix's standard package, although the services offered by each vary significantly.

But other names besides Disney will cause headaches for Netflix too. Apple TV+ will cost $4.99 a month. AT&T's (T 0.56%) jump into streaming is a bit complicated, with many options that may overlap and confuse consumers. But its HBO Max may work, since HBO creates quality content, has a record of success, and can demand a premium. Its big goal will be maintaining subscriptions (customers would order HBO to watch Game of Thrones and then cancel after it ended).

With Disney and Apple seeming intent on undercutting Netflix, at the very least it will diminish the streaming pioneer's ability to raise prices. Generally in retail, the lowest-priced entrant with the most value has the best odds -- look at Walmart -- and those economics won't shift for the streaming industry. If anything, Netflix may have to lower prices to keep market share growth high.

Disney can afford to work on little-to-no-profit to keep pricing competitive; I'm not so sure Netflix can. While it's profitable on the income statement, Netflix free cash flow (FCF) remains negative (in the third quarter alone it was negative $551 million). Netflix addresses the issue every quarter by maintaining that cash flow will improve in 2020 based on improving margins. But pricing pressure and a need for more original content might squeeze margins in the future.

Fourth-quarter guidance suggests a continued slowdown in year-over-year membership growth, with strength in financials. Revenue is expected to grow by 30% versus 27.4% in the year-ago quarter. Operating margins are expected to be 8.7% versus 5.2% in Q4 2018. Net income is forecast at $232 million compared with $134 million in Q4 2018. By all accounts, this forecasting is strong, and is anticipated to produce earnings of $0.51 per share.

That's great growth, but it doesn't justify the stock's valuation. Adding the fourth-quarter outlook to the year-to-date results would bring full-year earnings of $3.34 per diluted share, meaning it's trading at roughly 87 times forward earnings. That premium has been accepted by investors since the growth story gave promise that scale would bring meaningful profits. As membership growth slows, and other choices enter the market, that story seems less likely.

Subscription growth is likely to be slower than last year. Netflix anticipates 19.2% growth year over year to 165.93 million global paid monthly memberships, a decline from last year's 25.9% increase; and this is even before Disney+ and Apple TV+ arrive.

The stock is priced for much higher financial performance, which the competition probably will prevent. The effects will likely be slow, but over time, they could eat away at Netflix's position as a dominant player within streaming.