Please ensure Javascript is enabled for purposes of website accessibility
Log In Help Join The Motley Fool
Free Article Join Over 1 Million Premium Members And Get More In-Depth Stock Guidance and Research
By Keith Speights - Oct 23, 2019 at 7:00AM

Which stock wins in a head-to-head matchup between a leading Canadian cannabis producer and the top premium beer maker?

Some great news could be on the way for Aphria (APHA) and Constellation Brands (STZ -4.62%). Both companies stand to win as the Canadian cannabis derivatives products hit the shelves in December. Aphria is gearing up to market a variety of products, while Constellation's big investment in Canopy Growth (CGC -20.81%) means the alcoholic beverage maker will be closely watching the new Canadian market as well.

But which of these two stocks is more likely to deliver better returns in the short-term and over the long run? Here's what you need to know about how Aphria and Constellation Brands stack up against each other. 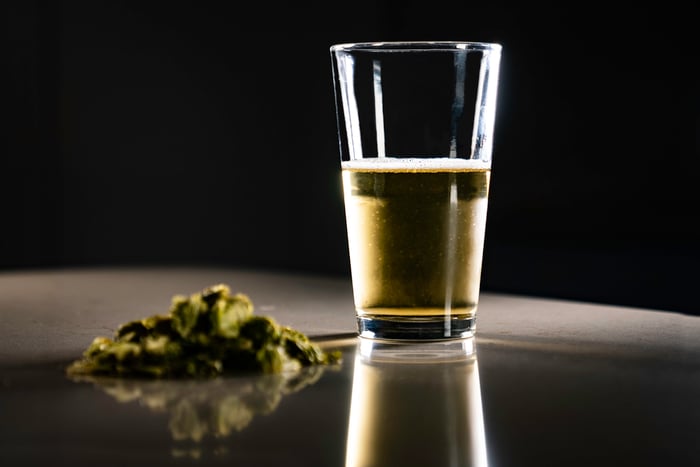 Aphria offers arguably the best bang for the buck of any top Canadian cannabis producer. The company claims the third-largest production capacity in the industry. However, Aphria's market cap is a fraction of its bigger rivals Aurora Cannabis and Canopy Growth. Aphria is even valued lower than Cronos Group and Tilray, both of which have lower production capacities than Aphria does.

There's also another advantage that Aphria holds over these other top Canadian cannabis producers: It's been profitable for two consecutive quarters. Granted, fair value adjustments related to the sale of inventory and the growth of biological assets have been key to those profits. Still, though, even without these adjustments, Aphria's bottom line has handily outperformed its rivals.

The key to Aphria's success has been its international operations. In particular, the company's acquisition of German medical cannabis distributor CC Pharma earlier this year is paying off nicely. CC Pharma now contributes three-quarters of Aphria's total net revenue.

That's not to say that Aphria isn't performing well in its home country of Canada. The company's adult-use recreational marijuana sales continue to grow at a solid pace. Aphria claims a 12% market share in Ontario, the biggest legal cannabis market in Canada.

Aphria plans to launch new edibles and vapes in the "Cannabis 2.0" market, which will boost sales even more. Interim CEO Irwin Simon confirmed in Aphria's fiscal 2019 Q4 conference call earlier this month that the company remains on track to deliver an annualized run rate of 1 billion in Canadian dollars in sales by the end of calendar year 2020.

One wild card for Aphria relates to its potential to land a major partner from outside the cannabis industry. Simon stated in the Q4 call that Aphria is "talking to multiple partners in regards to strategic opportunities." It's possible that Aphria could announce a big partnership deal in the not-too-distant future, serving as a major catalyst for its stock.

There are two primary arguments for investing in Constellation Brands. One is the company's continued dominance in the U.S. premium beer market. The other is Constellation's 37% stake in Canopy Growth gives it a significant opportunity to win as the global cannabis market expands.

Using the word "dominance" to describe Constellation's position in the U.S. premium beer market isn't an exaggeration. The company ranks first in retail dollar sales growth among beverage alcohol suppliers, with Constellation generating close to 25% of the total growth in the market.

Constellation expects to keep growing sales of its premium beers, with Corona and Modelo leading the way. CEO Bill Newlands stated in the company's Q2 conference call that there are three key growth drivers for Constellation's beers: a continued trend of "premiumization" as consumers shift to premium beers; a growing Hispanic population; and initiatives to capture more shelf space.

Although Constellation's wine and spirits business hasn't performed as well, the company is taking steps to change that. It sold over 30 brands to E. & J. Gallo. Constellation is focusing on higher-margin premium brands in a strategy similar to its successful approach in the beer market.

So far, Constellation's investment in Canopy Growth has resulted in nearly $600 million in cumulative losses weighing on its bottom line. However, Constellation continues to think that its cannabis investment will pay off over the long run.

Canopy Growth is poised to be a big winner in the Canadian cannabis derivatives market, with plans to launch cannabis-infused beverages, edibles, and vape products. It's also arguably in the best position of any Canadian cannabis producer in the U.S. Canopy expects to soon roll out hemp CBD products and could jump into the U.S. marijuana market immediately if federal laws are changed thanks to its deal to buy Acreage Holdings.

I think Aphria is one of the most underappreciated Canadian marijuana stocks. However, if I could only go with one of these two stocks, it would be Constellation Brands.

Constellation's premium beers give the company a big financial advantage. I look for the company to report improvement for its wine and spirits business in the coming year. And while Canopy probably will continue to be a drag on Constellation's bottom line for the next couple of years, my view is that the tide will turn.