Please ensure Javascript is enabled for purposes of website accessibility
Log In Help Join The Motley Fool
Free Article Join Over 1 Million Premium Members And Get More In-Depth Stock Guidance and Research
By Darrell Delamaide - Oct 23, 2019 at 9:00AM

The granddaddy of cloud services is still going strong.

The sizzling software as a service (SaaS) sector is so hot it has investors looking all over for mid-caps and start-ups to be their ticket to riches. Don't look too hard. One of the best investments in the sector is the company that pioneered the whole cloud business -- Salesforce (CRM 3.50%).

The San Francisco-based company began operations just 20 years ago with a simple but revolutionary idea to help companies use applications for customer relations management (hence the CRM ticker). Also revolutionary was the decision not to sell software to install on client servers, but to run the applications over the web on their own servers. Thus was the cloud model for delivering software services born. 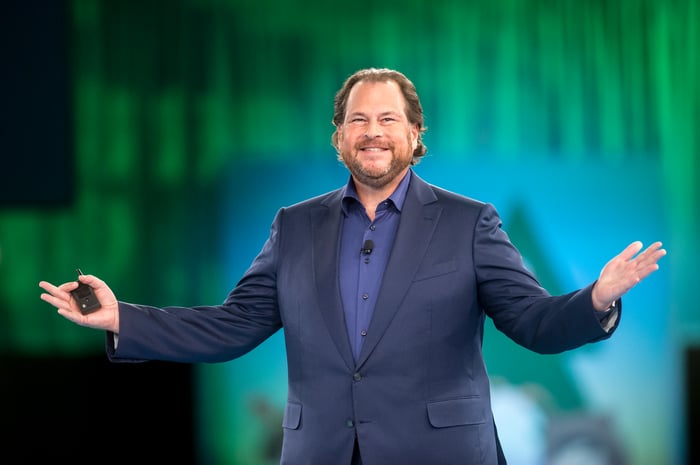 Constantly finding new customers and new uses for its management system -- Salesforce deployed its considerable resources to turbo-power the reelection campaign of President Barack Obama in 2012 -- the company continued its explosive top-line growth. It doesn't show any sign of letting up. Revenue grew from $8.4 billion in fiscal 2017 to $13.3 billion in fiscal 2019 (ended Jan. 31, 2019) and is expected to keep up the 20%+ pace in coming years.

On its own, Salesforce should grow to $22.4 billion revenue by fiscal 2022. Adding revenue from Tableau, the data visualization company Salesforce acquired for $15.7 billion in stock, sales could rise to $24.5 billion by that date.

All this has made founder and co-CEO Marc Benioff something of a tech guru, championing progressive social causes like climate change and homelessness. Most recently, he has pledged to close the gender gap in pay, saying the company has spent $10 million to make salaries more equal.

The rap against Benioff is that he is pursuing growth at any cost. Sales Cloud growth is slowing so he is goosing the top line with acquisitions, according to this school of thought. The Tableau buy, in this view, is just a bigger version of the earlier $6.5 billion acquisition of MuleSoft, a company that added an API integration system to the mix.

That may be selling Benioff short. The Tableau acquisition, completed in August, significantly expands Salesforce's total accessible market at a time when its dominance in the sales cloud world results in slower growth. Digital transformation -- the buzz word for reimagining sales, marketing, and customer service into something different -- is a market estimated to reach $1.8 trillion by 2022.

Salesforce can leverage its broad customer base into this new dimension. Co-CEO Keith Block said in August that customers are turning to Salesforce precisely for this digital transformation, citing FedEx, AXA, and Unicredit as examples.

Joining Salesforce's AI-powered Einstein to the data analytics and visualization capabilities of Tableau is supposed to be the world-beating combination that propels Salesforce to further growth. Call it growth at any cost but it doesn't seem any less astute than Facebook buying Instagram or Alphabet's Google buying YouTube.

Nor is Salesforce sacrificing profit for top-line growth. Annual earnings growth averages 31% -- better than Amazon -- and is also expected to continue at that pace. Still, skeptics caution that Salesforce's price-to-earnings (P/E) ratio compares unfavorably to Amazon and is way too high to sustain its valuation. Of course, Amazon had a similarly P/E multiple before it started making big money -- just last year -- and you don't hear many complaints.

The recent sell-off in software stocks has hit SaaS companies with little or no profit, such as Workday or Slack Technologies, the hardest. Midcaps like Zendesk or LiveRamp, which appeal to many investors for their niches, have also suffered downturns.

Even on their best days, however, these stocks are just following the lead of a Salesforce, not creating any fundamental disruption of their own. One or the other may hit a home run and create a solid niche, but a more likely fate is extinction or being snapped up by a tech giant. Salesforce shares has pulled back along with other software issues, but this creates a buying opportunity. That is, if you believe software as a service has a future.