Please ensure Javascript is enabled for purposes of website accessibility
Log In Help Join The Motley Fool
Free Article Join Over 1 Million Premium Members And Get More In-Depth Stock Guidance and Research
By Lee Samaha - Updated Oct 24, 2019 at 8:23AM

There are mixed conclusions to be drawn from the earnings of CSX, Union Pacific, and Kansas City Southern.

Now that the third-quarter earnings are in for three of the largest listed railroads in America -- CSX (CSX -0.07%), Union Pacific (UNP -0.10%), and Kansas City Southern (KSU) respectively -- it's time to check on what they mean for the economy and the railroad sector at large.

There are two overarching and intrinsically connected things to focus on with investing in the railroad sector right now. The first is the usual question of economic growth -- railroads' revenue will always be a function of freight conditions, and that depends on the economy. The second is the ability of the railroads to improve efficiency, usually judged in terms of their operating ratio, or OR, which measures expenses over revenue. 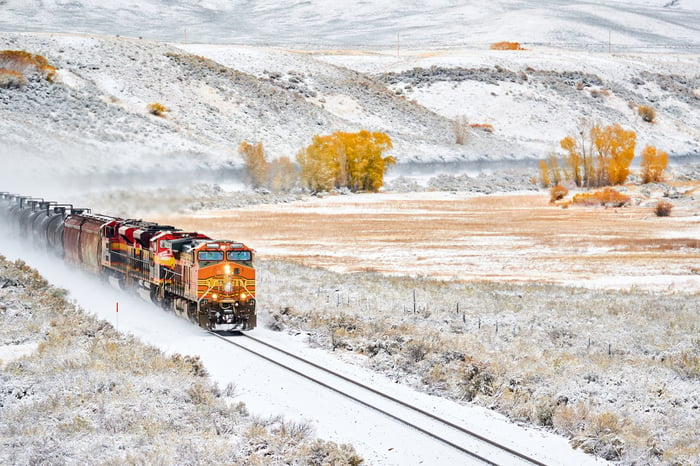 The two factors are linked because the high fixed costs of railroads tend to mean that the OR is guided up and down by changes in revenue, which in turn is guided by carload volumes and the economy. But in recent years, nearly all the leading railroads -- with the exception of Berkshire Hathaway's BNSF -- have explicitly adopted precision scheduled railroading (PSR) management methodology.  Simply put, PSR tends to run trains on fixed schedules between two points on a network rather than using a traditional hub and spoke method of moving freight.

Armed with this knowledge, let's look at the latest results from CSX, Union Pacific, and Kansas City Southern in terms of revenue/industry outlook and OR. In general, the following conclusions can be drawn:

The first point is highlighted by looking at the three railroads' OR trends. As you can see below, CSX was the first to implement PSR in 2017, and its OR has fallen dramatically since then. For reference, Union Pacific and Kansas City Southern were relatively late to the PSR party, only adopting it in late 2018 and early 2019, respectively.

The latest data points suggest ongoing improvements, and CEO James Foote of CSX confirmed his expectation for a sub-60% OR in 2019, even if he wasn't drawn on the outlook for 2020. Meanwhile, Kansas City Southern management still expects its OR to get to the low end of the 60% to 61% range by 2021.

And on the Union Pacific earnings call, CFO Rob Knight said that "our guidance of a sub 61% operating ratio in 2019 on a full-year basis remains intact, despite the falloff in volumes. Furthermore, an early look at next year's productivity lineup gives us confidence with our ability to achieve an operating ratio below 60% for 2020." 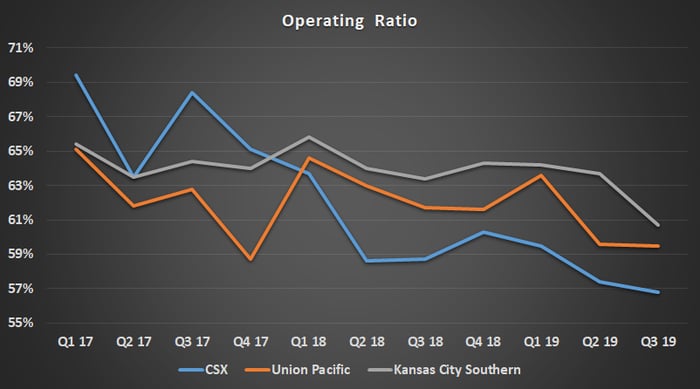 The OR performance and outlook of all three are commendable given the deterioration in the economy. For example, CSX started the year expecting full-year revenue growth of 1% to 2%, only to reduce expectations to a decline of 1% to 2% during the second-quarter earnings call. As you can see below, the results from the first three quarters and in the trend in the third quarter suggest CSX and Union Pacific have a job to do in the fourth quarter in order to meet full-year expectations.

Moreover, a look at intermodal volume -- an economically sensitive part of railroad revenue that measures carloads transported between different modes such as shipping to trucking, etc. -- shows the slowdown in growth in 2019. To be fair, the recent declines in intermodal volume -- notably at CSX and Union Pacific -- are being exacerbated by deliberate lane closures in line with PSR initiatives focused on improving efficiency.

That said, the overall trend in intermodal volume is clearly downward. 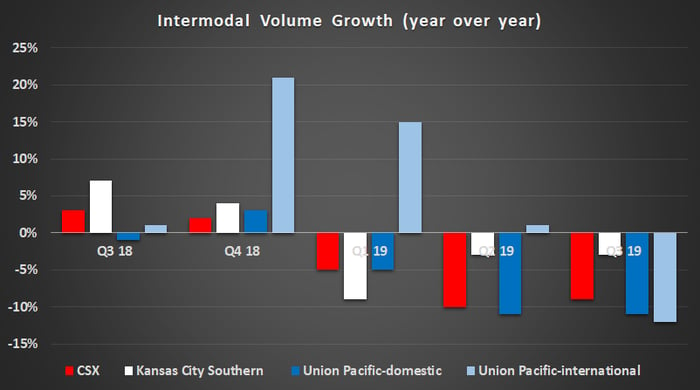 In the short term, the latest results can be read as a confirmation of a slowing in the economy, and this could threaten the near-term outlook.

But for long-term investors willing to ride out the highs and lows of the economy, the improvement in OR -- even while the revenue outlook is weakening -- can be seen as raising the overall level of earnings for railroads over the business cycle. That's good news for investors looking for long-term income for their retirement.