V.F. Corp. missed the mark, and Anheuser-Busch faced some challenges.

News that the U.S. was close to finalizing sections of the first phase of a trade deal with China was enough to send the major stock indices soaring on Friday.

Two stocks that didn't participate in the rally were apparel company V.F. Corp. (VFC -2.49%) and beer giant Anheuser-Busch InBev (BUD -1.46%). While neither dropped a bombshell on investors, there was enough bad news to send both stocks lower.

The company behind The North Face, Vans, Timberland, and other popular apparel brands came up short on Friday. V.F. Corp. missed analyst estimates across the board when it reported its fiscal second-quarter results, although it reiterated its full-year guidance and boosted its dividend. While the news wasn't terrible, investors had pushed the stock down 6.2% by 2:15 p.m. EDT.

V.F. Corp.'s revenue from continuing operations rose 5% year over year to $3.4 billion, missing the average analyst estimate by $30 million. The active segment was the strongest performer, growing revenue by 9% year over year. Adjusted earnings per share of $1.26 was up 6% year over year but fell short of analyst expectations by $0.04. Gross margin was up nearly a percentage point to 52.9%.

Despite the weaker-than-expected results, V.F. Corp. maintained its guidance for the full year. The company expects revenue of $11.8 billion, up 6%, and adjusted EPS between $3.32 and $3.37. Some of the components of the company's revenue guidance shifted a bit, but nothing has drastically changed. V.F. Corp. also raised its quarterly dividend, with the new dividend of $0.48 per share representing a 12% increase.

There was nothing all that bad about V.F. Corp.'s report, but investors might be starting to question whether a slow-growing apparel company deserves a premium valuation. Based on the midpoint of the company's full-year guidance, the stock trades for around 25 times earnings. That seems optimistic, especially given the macroeconomic uncertainty that could eventually derail the company's results.

A challenging quarter for Anheuser-Busch InBev

One company that's already feeling some heat from a tough macroeconomic environment is Anheuser-Busch InBev. The beverage company missed analyst estimates for revenue by a wide margin in the third quarter, and it expects the headwinds it faced to carry over into the fourth quarter. The stock was down 10.7% at 2:15 p.m. EDT. 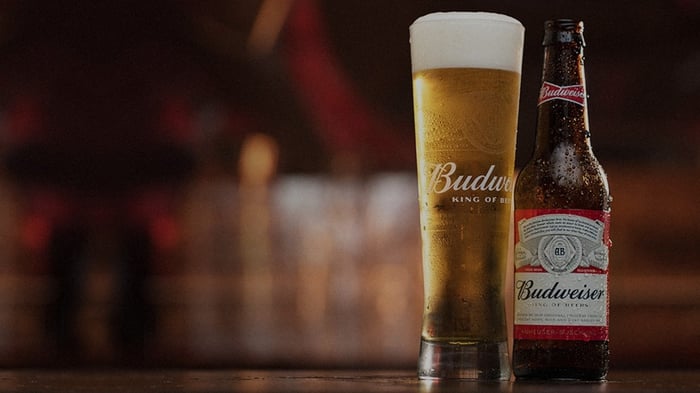 Total revenue was $13.2 billion for Anheuser-Busch in the third quarter, up 2% year over year but $580 million below analyst expectations. Volumes were down overall, with larger declines in China and Brazil. In the U.S., the company sees the hard seltzer category as an overall positive.

Headwinds during the third quarter included shipment phasing in China leading to lower volumes, increased cost of sales from commodity prices and currency, the lapping of the 2018 FIFA World Cup, and soft demand in South Korea and Brazil that was worsened by price increases.

Anheuser-Busch expects these headwinds to persist in the fourth quarter, and as a result, the company now sees revenue per hectoliter growing slightly slower than inflation for the full year. EBITDA growth is also now expected to be "moderate" in 2019. Previously, the company had expected "strong" EBITDA growth for the year.

While a double-digit stock decline might be an overreaction, it's clear that investors aren't happy with Anheuser-Busch's results.