Exploit the market's blind spots by investing in these three stocks.

One of my favorite investing tricks is to take advantage of the market's bias toward short-termism.

Caught up in the latest quarterly earnings beats and misses, Wall Street often gives too much weight to the latest round of results (or another news item) that doesn't actually affect the company's long-term prospects that much. This can lead to sharp sell-offs that only prove to be temporary, providing a great opportunity to find bargain stocks. 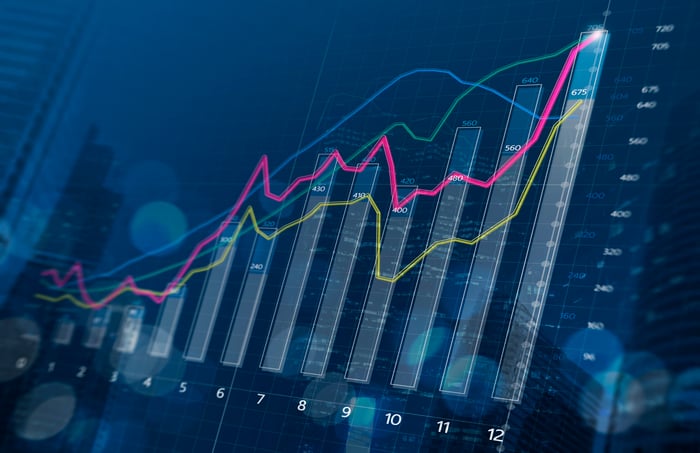 It's no secret that the market has been skittish about the retail industry. After all, nearly every week, there seems to be news of another chain teetering on the edge of bankruptcy, and the rise of e-commerce has brought a sea change in the sector.

As a result, retail stocks have largely missed the broad-market rally over the last five years as the SPDR S&P Retail ETF has been essentially flat. Children's Place, the children's apparel retailer, had been one of the best-performing retail stocks for years as shares nearly tripled from November 2015 to November 2018 as the company posted steady comparable sales and profit growth. However, over the last year, the stock has plummeted, losing nearly half of its value.

There's a simple reason for this: Children's Place's closest rival, Gymboree, went bankrupt earlier this year and liquidated all of its stores, causing Children's Place's sales and profits to plunge for the first half of the year. However, the retailer expects to return to growth in the current quarter, forecasting 3%-4% comparable sales growth, and its fiscal 2020 guidance should be especially strong as it laps the headwinds from earlier this year.

The company also acquired the intellectual assets of Gymboree and announced plans to relaunch the brand early next year with 200 shops inside Children's Place stores and enhance the online shopping experience on Gymboree.com, giving it an additional growth avenue next year.

Children's Place stock could double just by recouping its losses over the last year. Once its quarterly numbers begin to improve, especially when it laps the results from the first half of the year, the stock should move easier as its future prospects will look much brighter.

Though the strength of the housing market fluctuates over the short term in the U.S., housing and home improvement are huge components of the U.S. economy and a significant source of its growth.

Homebuilders and home-improvement retailers have a lot to gain from an expansion in housing, but one often-overlooked play is ANGI Homeservices, the parent of HomeAdvisor, Angie's List, Handy, and other online home-improvement portals.

ANGI continues to put up steady revenue growth as adjusted revenue rose 20% to $343.9 million in its most recent quarter, but the stock has been hampered by concerns about its profitability.

Shares are down 58% this year, and plunged on the company's most recent earnings report after its adjusted EBITDA badly missed expectations. ANGI reported adjusted EBITDA of $51.4 million, below its own guidance of $55 million-$65 million. The company also slashed its full-year adjusted EBITDA guidance from $280 million-$300 million to $200 million-$230 million, but that isn't a reflection of any fundamental flaw with the company's business. The cut in guidance is a result of mismanagement of its search engine marketing in the second quarter as many of the clicks from free search came through paid ads.

The company is in the process of rebalancing its search engine marketing. IAC CEO Joey Levin explained the issue, saying, "We lost the rhythm on our search engine marketing spend and turned our attention to other areas. This became all too apparent midway through the quarter when Google released a change that resulted in a pronounced shift of clicks from free to paid, and we weren't prepared to absorb it."

As ANGI remediates that issue, profitability should improve and its top-line growth of 20%-25% should continue given the huge opportunity in home services like plumbing, cleaning, and general contracting. That sets up the stock with an opportunity for substantial gains if it can bounce back from its recent sell-off.

A smart bet on the future

Axon Enterprises may not look like the typical bargain stock, trading at a P/E of 100, but the stock has a number of drivers that give value hunters a good reason to take a look.

First, it's been preparing for the launch of Taser 7, its newest and most advanced conductive electrical weapon, and recent results have been impacted by headwinds from the launch as gross margin in the Taser category fell from 70.8% to 59.9% over the past year. Still, Taser 7 has tremendous potential as it is integrated with cloud-connected software including Axon Evidence and sold on a subscription basis, giving Axon exposure to a number of powerful business models, including the razor/blade model as agencies must buy cartridges for the Taser weapons.

Combined, these new products and services have given Axon a set of competitive advantages that should propel the company's growth in law enforcement and security services over the long term.

Though revenue growth has slowed recently and profits have dipped as the company is in the midst of a heavy investment cycle, that should deliver better results over the coming quarters. As results improve, the stock should recover from its recent slide.